“His head and his heart was drunk, and his steps followed the dictates of that dark god whose pleasure it is to trample man’s reason and dignity underfoot” (Mann 244). It is interesting to note that the origin of the cholera, which ultimately kills Aschenbach, is India, the land from where Diosysus hails. In Aschenbach’s dream he envisions the ” ‘the stranger-god,’ the enemy of the composed and dignified intellect” (Mann 256). This dream links Archenbach’s dissention into desire with the worship of Dionysus.

Don't use plagiarized sources. Get your custom essay on
“ Analysis of Diosysus Character ”
Get custom paper
NEW! smart matching with writer

He awoke from the dream only to find himself powerlessly enslaved to the demon god, wishing that all the unwanted people in the city would either flee or die, leaving him alone on the island with the object of his desire. One afternoon, while following Tadzio and his family through the city streets,. Aschenbach finds himself lost in the labyrinth of the sick city. This is obviously symbolic of the state of his soul. The garbage that lay about the ground and the weeds that grow through the cobblestone represents the decay of the aged writers sensibility and morality.

Once a an avid follower of Apollonian ideals, the notion that order and control must prevail over man’s desires, Aschenbach has now resigned himself to the primal nature of his Dionysian conscious. In a dream-like state he once again has a vision of Socrates speaking to the young Phaedrus about the artist’s path to the spirit and the dangers that the sensual side of art poses, its ability to transform the moral core of the artist: … our pursuit is of Beauty alone, of Beauty which is simplicity, which is grandeur and a new kind of rigor and a second naivete, of Beauty which is Form.

But form a naivete, Phaedrus, lead to intoxication and lust; they may lead a noble mind into terrible criminal emotions, which his own fine rigor condemns as infamous; they lead, they too lead, to the abyss. I tell you, that is where they lead us writers; for we are not capable of self-exaltation, we are merely capable of self-debauchery. (261) This pursuit of “Beauty alone” has been the source of Aschenbach’s tragedy. By completely abandoning the cultural ideals of his time, and fully descending into a Dionysian realm of existence, he has become debased.

Ironically, his search for artistic freedom transforms him into a slave, a slave to his art and a slave to his desires. The tragic result of uncontrolled desire can also be found throughout the stories of Ovid’s Metamorphosis. Mortal as well as godly desires function as the catalyst of severe transformations. In The Story of Phaeton, the young boy, after being insulted for his boastfulness by a friend, desires proof of his father’s godliness and his mother’s virtue. Phaeton climbs to his father’s palace and pleads:

“Phoebus, my father, if I have the right/ To use that name, and my mother is not lying/ To hide some guilt with false pretense, my father,/ Give me proof, so people will believe me,/ Know me for what I am, and let my mind/ Be free of doubting! ” (Ovid 29) The Sun-God responds by assuring his son that he is indeed his father, that his mother has told no lies in regard to his godly lineage, and, as a means of proof, Phoebus offers, “To make you doubt the less, ask any favor/ What ever you will; it surely will be granted” (Ovid 29).

What Phaeton desires for proof is the reigns of Phoebus’ chariot. With this request, Phaeton has transgressed the boundaries between gods and mortals. Phoebus realizes the promise he has made his son was unwise and, unable to take back the promise, he tries to rationally persuade phaeton to choose more wisely: “What you want,/ My son is dangerous; you ask for power/ Beyond your strength and years: your lot is mortal,/ But what you ask beyond the lot of mortals. / Poor ignorant boy, you ask for more than gods/ Have any claim on.

” (Ovid 30) Unfortunately, wrought with the prideful desire to prove his identity to the world, Phaeton does not heed his father’s advice and holds him to his rash promise. As a result of his heart’s desire Phaeton sets off a chain of transformations that affects the earth’s landscape and his entire family. Jove, in an attempt to cease the destruction caused by Phaeton’s inability to control the chariot, throws a lightening bolt at the youth, knocking him out of the chariot and hurling him to his death.

The destructive ride caused the transformation of oceans into deserts, meadows into wastelands and, “or so men think,” the people of Africa to turn black. In addition to the changes of earthly aesthetics, Phaeton’s sisters were transformed into jewel-bearing trees, his cousin was transformed into a swan and his parents were left to spend eternity in sorrow over the events. Throughout Ovid’s work there are numerous accounts of metamorphoses that result from power and sexual desire. Also featured in these stories is a consistent motif that powerlessness is figured as an inability to speak. One example is the story of Jove and Io.

Io was the innocent and fair maiden who resisted the advances of Jove. Wishful of retaining her virtue, Io flees from Jove but is eventually apprehended and raped. Meanwhile Juno, ever suspicious of her husband’s fidelity, comes down to earth with the idea that she will discover Jove in an unfaithful act. To protect himself from the wrath of his wife, he turns Io into a heifer, a heifer so lovely, “Even in altered form, and even Juno/ Looked on, though hating to, with admiration” (Ovid 22). When asked by his wife from where the heifer came, Jove responded, “she had sprung out of the earth full-grown.

” Juno, still doubtful, coerces Jove into giving Io to her as a present and places her under the watchful eyes of Argus. When Io tried “To plead, she only lowed, and her own voice/ Filled her with terror” (Ovid22). One day, while out grazing, she came across her sisters and father. Of course they did not recognize this white lovely heifer as being kin. If she could talk,/ She would ask for help, and tell her name and sorrow,/ But as it was, all she could do was furrow/ The dust with one forefoot, and make an I,/ And then an O beside it, spelling her name,/ Telling the story that changed her condition.

(Ovid 23) Argus, witnessing the tearful reunion, drove Io from her father to another pasture. “Jove could not bear her sorrow any longer” (Ovid 23) and called on his son, Mercury to kill Argus. After lulling Argus to sleep with soothing melodies, Mercury sliced off his head. Juno fastened the eyes of Argus to the feathers of her favorite bird, the peacock. She was so full of fury that her desire was to drive Io mad with terror. Io came to the banks of the Nile River, and “with groans and tears and mournful lowing,” she prayed to Jove to end her suffering.

And He was moved to pity; embracing Juno/ He begged her: “End this punishment; hereafter/ Io, I swear, will never cause you anguish,”/ And what he swore he called the Styx to witness. / And Juno was appeased. Io became/ What once she was, again. (Ovid 25) Io is protected from future rape and finally achieves her desired human freedom again only when Jove is deprived of his immoral desire by an unbreakable promise. . In The Story of Actaeon, Ovid gives a contrasting account of the desire for chastity.

In an interesting reversal of gender roles, Diana, the virgin goddess of the hunt, metamorphoses an innocent Actaeon into a stag for seeing her naked while she bathed. “In the story/ You will find Actaeon guiltless; put the blame/ On luck, not crime: what crime is there in error? ” (Ovid 61). Upon realizing that the innocently lost hunter had viewed her naked body, Diana is furious. She looks around for a weapon but resorts to throwing water at Actaeon. “Those drops had vengeance in them… but on the sprinkled forehead/ Horns of the long-lived stag began to sprout” (Ovid 62-63).

He flees the presence of Diana and runs to a quite pool where he finally sees his reflection. “Alas! / He tries to say, but has no words. He groans,/ the only speech he has, and tears run down/ cheeks that are not his own” (Ovid63). While Actaeon tries to decide where to go he is discovered by his own pack of hounds, “With the lust of blood upon them,” and so, the hunter has been transformed into the hunted. His hunting companions join the pack to revel in the kill, the whole while calling Actaeon’s name, concerned that “he is missing a good show.

” However, he remained voiceless and his friends did not recognize his pleading eyes. “And so he died, and so Diana’s anger/ Was satisfied at last” (Ovid 64). Diana’s desire for chaste virginity caused Actaeon’s transformation, but his death was the result of animal nature. And gossip argued/ All up and down the land, and every which way:/ Some thought the goddess was too merciless/ And others praised her; maidenhood, they claimed,/ Deserved such stern acts of reckoning,/ And both sides found good for their judgment.

(Ovid 64). The powerful emotion of desire, especially when possessed by the powerful, has the ability to transform man into gods, beasts and plants. It can tear apart the foundation of ancient societies, and hurl a stable man’s soul into an immoral abyss. Ultimately, there must be an appropriate balance between the apollonian and Dionysian conscious in order to avoid certain personal and universal tragedies. 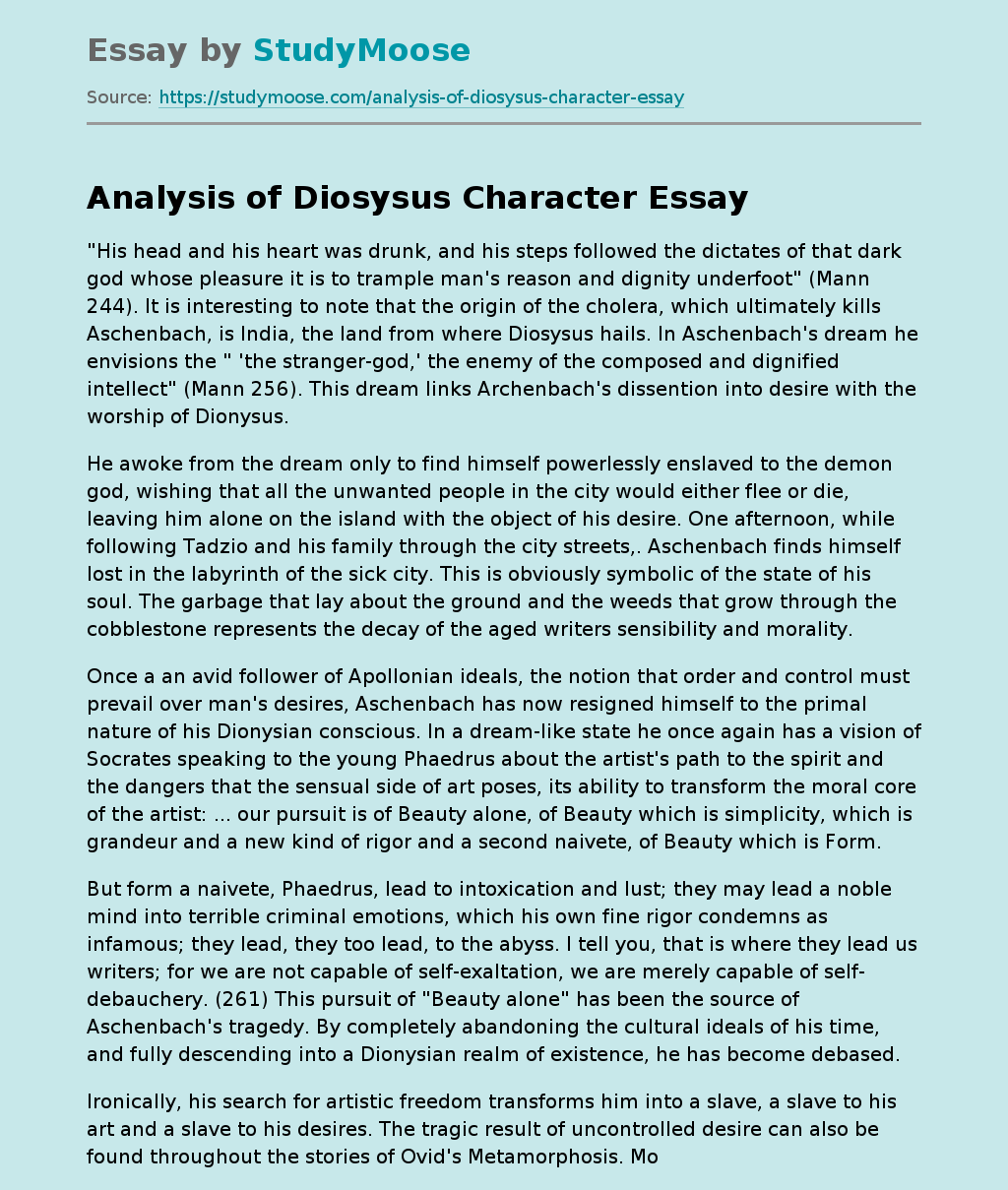