Analysis of Dickens' use of irony, satire and humour in Oliver Twist

There are multiple examples throughout Oliver Twist of irony, satire and humour. Although a dark novel, there are many moments of humour and an extraordinary amount of chuckling, giggling and knee-slapping by characters. Each of the literary techniques of humour, irony and satire, employed by Dickens help add focus and depth on the various conflicts between the novels outcasts and its established society. It is impossible to cover all avenues within Oliver Twist that might be considered as humorous, satirical or ironic but some of the more obvious and important examples of each will now be discussed.

Don't use plagiarized sources. Get your custom essay on
“ Analysis of Dickens’ use of irony, satire and humour in Oliver Twist ”
Get custom paper
NEW! smart matching with writer

There is ambiguous humour in conflicts between the institution and the individual found throughout Dickens’ Oliver Twist. An example of this coming early in the second chapter when Oliver is told that “the board has said he has to appear before it forthwith1”, the humour here comes in Oliver’s ignorance of “not having a very clearly defined notion of what a live board was” and on entering the room of “eight to ten fat gentlemen” he is told to “bow to the board”, “seeing no board but the table, he fortunately bowed to that”.

Oliver’s ignorance here is both humorous and sad, as it underpins his youthful ignorance and helplessness in the face of his situation which is very much out of his control.

There are many examples where Dickens juxtaposes humour and ridicule with aggression and cruelty; one example being the introduction of Mr. Gamfield in chapter three, who was “alternately cudgelling his brains and his donkey2”, this gives rise to laughter on the part of the audience and also gives, in my opinion, an impression of Gamfield as ridiculous or as a fool.

Soon after we are told that he gave the donkeys jaw “a sharp wrench”, and “another blow on the head, just to stun him till he came back again”, this portrayal of him as aggressive and violent is juxtaposed with the fool implied earlier. The “cudgelling” that was once used humorously is now replaced by its more aggressive definition, “short, thick stick used as a weapon3” This dichotomy between humour and aggression is used repeatedly by Dickens and in my opinion forces the audience to never fully feel comfortable in laughing at situations as we are never truly sure if this situation or character will soon show a darker side.

Later in the scene between Gamfield and the board, the use of laughter as a weapon and inextricably linked to aggression and violence is again shown when he tells the board:

“Boys is wery obstinit, and wery lazy gen’lmen, and there’s nothink like a good hot blaze to make ’em come down with a run. It’s humane too, gen’lmen, acause, even if they’re stuck in the chimbley, roasting their feet makes ’em struggle to hextricate theirselves”2

Our laughter here is one of incredulousness and some revolt at Gamfields brutal account of his treatment of boys. This puts the audience in the uncomfortable position of the board because we are like the “gentleman in the white waistcoat” who “appeared very much amused by his explanation.” This juxtaposition of humour and brutality puts the audience in the uncomfortable position of being able to put itself in the position of the more brutal and vicious characters in Oliver Twist while also allowing us to sympathise and empathise with Oliver and dislike those responsible for their maltreatment.

The humour in the famous scene where Oliver asks for more can be seen in the masters somewhat extreme to a trivial event. We are told he “gazed in stupefied astonishment” and “clung for support to the copper”. This extreme reaction to such a small request while humorous in and of itself serves a greater purpose in showing the appalling situation and impoverished position this orphan boy, Oliver Twist found himself in. The fact that to ask for “more” then the meagre “supper allotted by the dietary” could cause such a reaction from the master and cause the gentleman in the white waistcoat to say, “that boy will be hung…I know that boy will be hung”, although amusing in its extreme reaction, this also serves to pointedly shed light on the dire situation for those orphaned and in state ‘care’ at the time, who encountered brutality and apathy at every turn.

Another example of laughter in Oliver Twist is in the naming of the characters; ‘Master Charles Bates’, often referred to as ‘Master Bates’ is a very clear pun that is most definitely not lost on the audience. The mere mention of his name evokes a smirk and laughter from the audience. The naming of the character of the Beadle as ‘Mr. Bumble’ is also for comic effect in my opinion. The Oxford English Dictionary defines bumble as to ‘move or act in an awkward or confused manner; speak in a confused or indistinct way.’ Like that of Master. Bates, the image evoked by the name “Bumble” is one of ridicule, a fool or idiot but Mr. Bumbles behaviour throughout the book does not make him a sympathetic foolish character, instead his consistent brutality, viciousness and violent nature lends him to become one of the villains of the story. However his naming by Dickens is not only a source of humour but also of irony. It is ironic that Mr. Bumble is incapable of seeing Oliver’s situation correctly and is easily fooled by those he believes are inferior.

Dickens’ Oliver Twist is laden with irony. The opening chapters exemplify this when Oliver cries himself to sleep and Dickens sarcastically exclaims, “What a novel illustration of the tender laws of England! They let the paupers go to sleep!1” This irony is effective in showing the discontinuity between the various classes in Victorian London, better than simply stating the conditions present at the time.

The scene where Oliver asks for more gruel is also ironic in that the helpless starving orphan, only trying to improve his situation in life, is treated incredulously and punished by the healthy and well-feed board members who in reality should be the ones who are punished for their treatment of the poor.

Another form of irony Dickens uses is in showing the duplicitous nature of the society in Victorian London at the time. The upper class found on the board, believe Mrs. Mann to be a great caretaker of the orphans, however when viewed from the position of the lower class perspective of the orphans themselves, she is greedy and abusive.

Again this duplicity and irony can be seen when Oliver is presented to the Board and begins to cry, a reaction that should be understandable to anyone, because he is a scared, nine year old boy, alone, in a room full of daunting adults, not knowing what to expect, however the board cannot understand this and one questions, “What are you crying for?…And to be sure it was very extraordinary. What could the boy be crying for?”1 The members of the board really have no understanding of why Oliver could be crying, believing they have provided him with everything he could need and a luxurious home in the workhouse. They have no understanding or sympathy for the situation of the poor people of London as shown when Dickens states that:

“When they [the board members] turn their attention to the workhouse, they found out at once, what ordinary folks would never have discovered – the poor people liked it! It was a regular place of public entertainment for the poorer classes; a tavern where there was nothing to pay”1

There are multiple examples of social and political satire throughout Oliver Twist. It is a satirical attack of the way in which predestined social class and poverty affects the outcomes of a person’s life and a protest by Dickens against the Poor Law and the Workhouse system of the time. The overlooked manner in which Oliver’s birth is described provokes compassion in the audience. He “breathed, sneezed, and proceeded to advertise to the inmates of the workhouse the fact of a new burden having being imposed upon the parish”. It is dark and ironic; Oliver is depicted as a troublesome burden upon the parish and society. From the outset his entrance into the world is despised, the antithesis of what a child’s birth should elicit. His life is condemned from the beginning by the ugliness of the world he has been born into and his social standing is imprinted upon him, he is a “humble, half-starved drudge – to be cuffed and buffeted through the world – despised by all, and pitied by none”3 and reaffirmed in the second chapter when the gentleman in the white waistcoat exclaims “that boy will be hung”

Oliver is the vehicle employed by Dickens to display the inadequacies within society. He highlights society’s various injustices. Through the use of Oliver, the vulnerable of society are given a voice. The characters that Oliver encounters each represent a different corrupted socio-political aspect prevalent in the society of the time. Mrs Mann and Mr Bumble both highlight the hypocrisy and perversion of the Poor Law and the Workhouse system, while Fagin is created as a representation of greed and materialism.

It is clear that Dickens employs irony, satire and humour to great effect in Oliver Twist, and does so in a manner that is not as straightforward as might originally seem. His use of irony and humour as a weapon shows clearly the maltreatment of the poor at the hands of the upper classes and serves to both amuse the audience and make it uncomfortable in laughing along with the unfair and improper situations that are being portrayed. The satire used by Dickens, although an exaggeration, exposes the ridiculousness and impropriety of the society being described and may also act as a true representation of the effects of the Poor Law and the workhouse system of the time.

Analysis of Dickens' use of irony, satire and humour in Oliver Twist. (2021, Nov 20). Retrieved from https://studymoose.com/analysis-of-dickens-use-of-irony-satire-and-humour-in-oliver-twist-essay 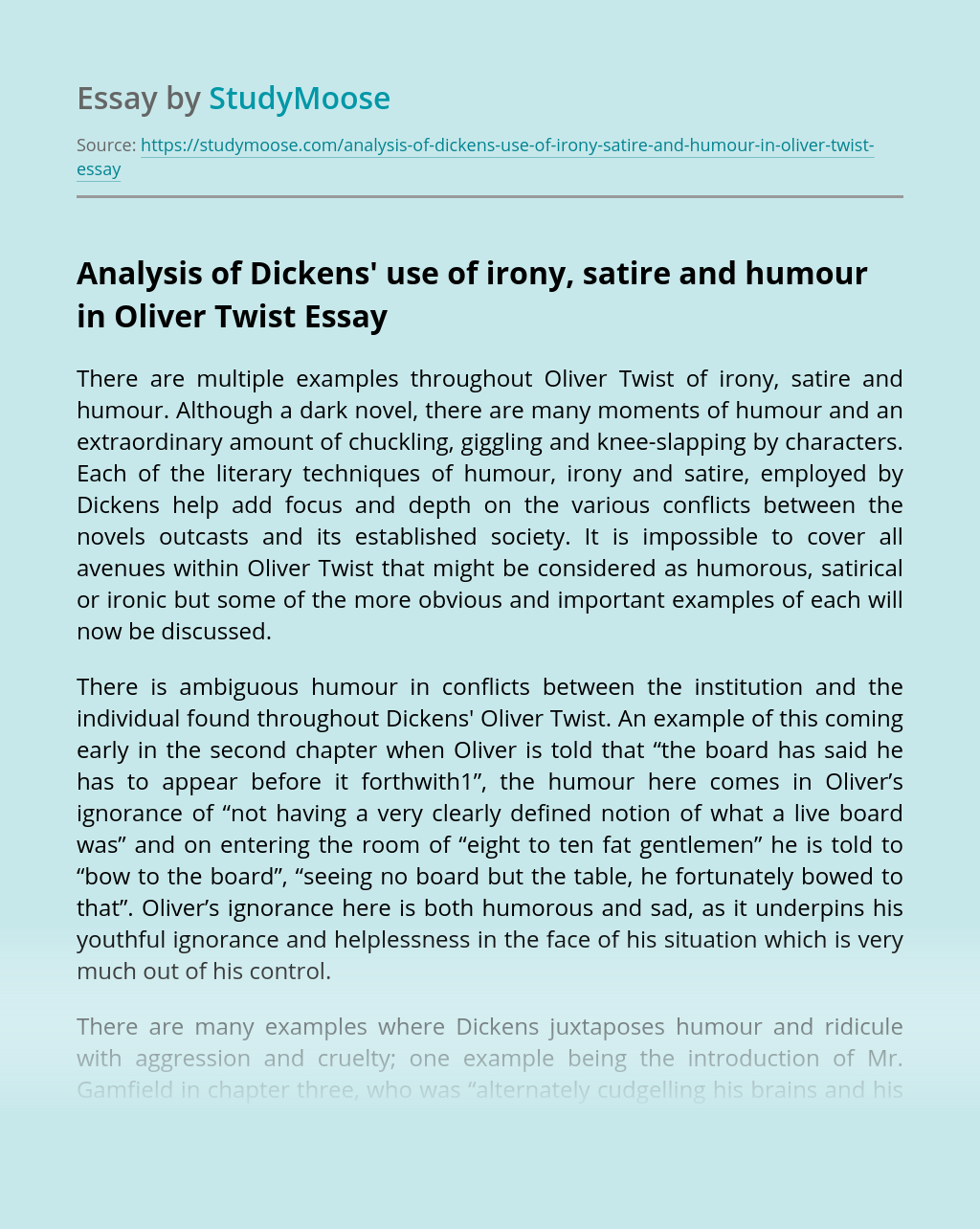