Analysis of Colonization in Destruction of the Indies

Bartolomé de las Casas was a Spanish historian and a social reformer who was writing in the 16th century, during the time of the Spanish occupation of the Indies. In A Short Account of the Destruction of the Indies, Casas provides a scathing commentary on the cruelty exercised by the Spanish colonizers on the natives of Hispaniola—as well as explain the aims that motivated this behavior. The account acts as not only an observation on the practices of the colonizers, but is also a reflection of the imperial policies of the Spanish Empire.

Don't use plagiarized sources. Get your custom essay on
“ Analysis of Colonization in Destruction of the Indies ”
Get custom paper
NEW! smart matching with writer

Through writing A Short Account of the Destruction of the Indies, Casas aims at bringing the Spanish Crown’s attention to the atrocities committed by the citizens of the empire on the natives. In keeping with that aim, he utilizes a rhetoric that seeks to arouse the sympathy of his readers towards the natives and a sense of horror over how they are being treated. Right from the beginning of the account, in the preface, he paints an image of the natives as being simple, and harmless.

He describes them as, “the simplest people in the world…they are without malice or guilt…never quarrelsome or belligerent or boisterous, they harbour no grudges…indeed the notions of revenge, rancour and hatred are quite foreign to them”.

In contrast to that, he describes the Spaniards as “ravening wolves” who fell upon the natives like “tigers or savage lions who had not eaten meat for days .“ Casas sets up a comparison between the helplessness of the natives and the savagery of the Spaniards, and this comparison holds throughout the document.

Examples of this comparison are in the frequent accounts he gives of the before and after native population levels once the Spanish occupy an area—“when the Spanish first journeyed here, the indigenous population of the island of Hispaniola stood at some three million; today only two hundred survive” or “not a living soul remains today on any of the islands of the Bahamas.” Casas uses concrete numbers in describing the decline in the population level, in the number deaths—he does this as a means of stressing the official nature of the document, to lend it a sense authority. These numbers also help in giving his readers a very clear idea of the terrifying extent of the Spanish cruelty. He enumerates the different ways through which the locals are being exterminated, which gives a fair idea of the general colonial practices in the Indies — through “forcible expatriation”, “unjust…tyrannical war,” working the natives to the point of death—Casas gives an example of a man who worked the natives under him so hard that within a month, out of three hundred, only thirty survived.

More importantly, Casas reveals the motives behind the widespread cruelty as being simple, materialistic greed. He explains that the greed for the gold that the natives have is the driving force behind the actions of the Spanish. The one instance that effectively reflects this fanatical greed is of the local lord who makes an offering of nine thousand castilians to the Spanish and is still seized and tortured for more gold—“tying him in a sitting position to a stake set in the ground, lit a fire under his outstretched feet to induce him to hand over yet more gold…when he produced no further gold, they carried on until all the marrow ran out through the soles of his feet.” What is worth noting is that Casas when first talking about this greed, refers to the Spanish as Christians—“the reason the Christians have murdered on such a vast scale and killed anyone and everyone in their way is purely and simply greed.” Casas obviously uses the term “Christian” ironically to draw attention to the un-Christian behavior that the Spanish are displaying in the colonies. Casas was the Bishop of Chiapas.

He was a clerical man, and so his primary concern was the un-Christian activities that were taking place in the colonies. He exclaims that the colonizers have “little concern over their [natives] souls as for their bodies, all the millions that have perished, having gone to their deaths with no knowledge of God.” This clearly defines exactly what A Short Account of the Destruction of the Indies as a text is—it is not a text that is arguing for equal rights, it is instead a text that shows the priorities and concerns of a man living under the Spanish Empire at the time. Casas views the natives not as people equal to the Spaniards, but as potential Christians. He describes them as being, “innocent and pure in mind and have a lively intelligence, all of which makes them particularly receptive to learning and understanding the truths of our Catholic faith and to being instructed in virtue.” Casas is outraged because the Spanish policy of “conversion and saving of souls as first priority” was not being followed. Instead, it was being used as an excuse — “The gulf that yawns between theory and practice has meant that, in fact, the’ local people have been presented with an ultimatum: either they adopt the Christian religion and swear allegiance to the Crown of Castile, or they will find themselves faced with military action.”

He describes how the Spanish would unnecessarily pillage an area, but would essentially be within their legal rights as they would make sure that they presented the natives with the royal ultimatum. Casas’ account is a good reflection of the general imperial policy of expansion of the Spanish Empire. The Spanish Empire used religion as a tool to further its aims—the Spanish Inquisition, for example, was established in 1478 by Catholic Monarchs Ferdinand and Isabella as a way of increasing their political authority via religion and to suppress any tension that may arise from social and cultural differences. While the activities of the colonizers wasn’t the same as the inquisition, as Casas points out, the Spanish in the colonies were using religion in a similar way.

Therefore, Casas’A Short Account of the Destruction of the Indies gives important insight into the practices of the Spanish Empire. It also presents an interesting perspective from someone who is a part and within the empire — who is aware and recognizes the malpractices of the Crown and more importantly, is attempting to do something to put a stop to it. It’s also important that the way he goes about this, is through literature—it shows us the importance of the written word in the process of trying to affect a change. Though Casas’ sentiment in the account might not be a common one at the time, it does signal a rising awareness of the moral blindness displayed in the activities of the empires/colonies.

Analysis of Colonization in Destruction of the Indies. (2016, May 16). Retrieved from https://studymoose.com/analysis-of-colonization-in-destruction-of-the-indies-essay 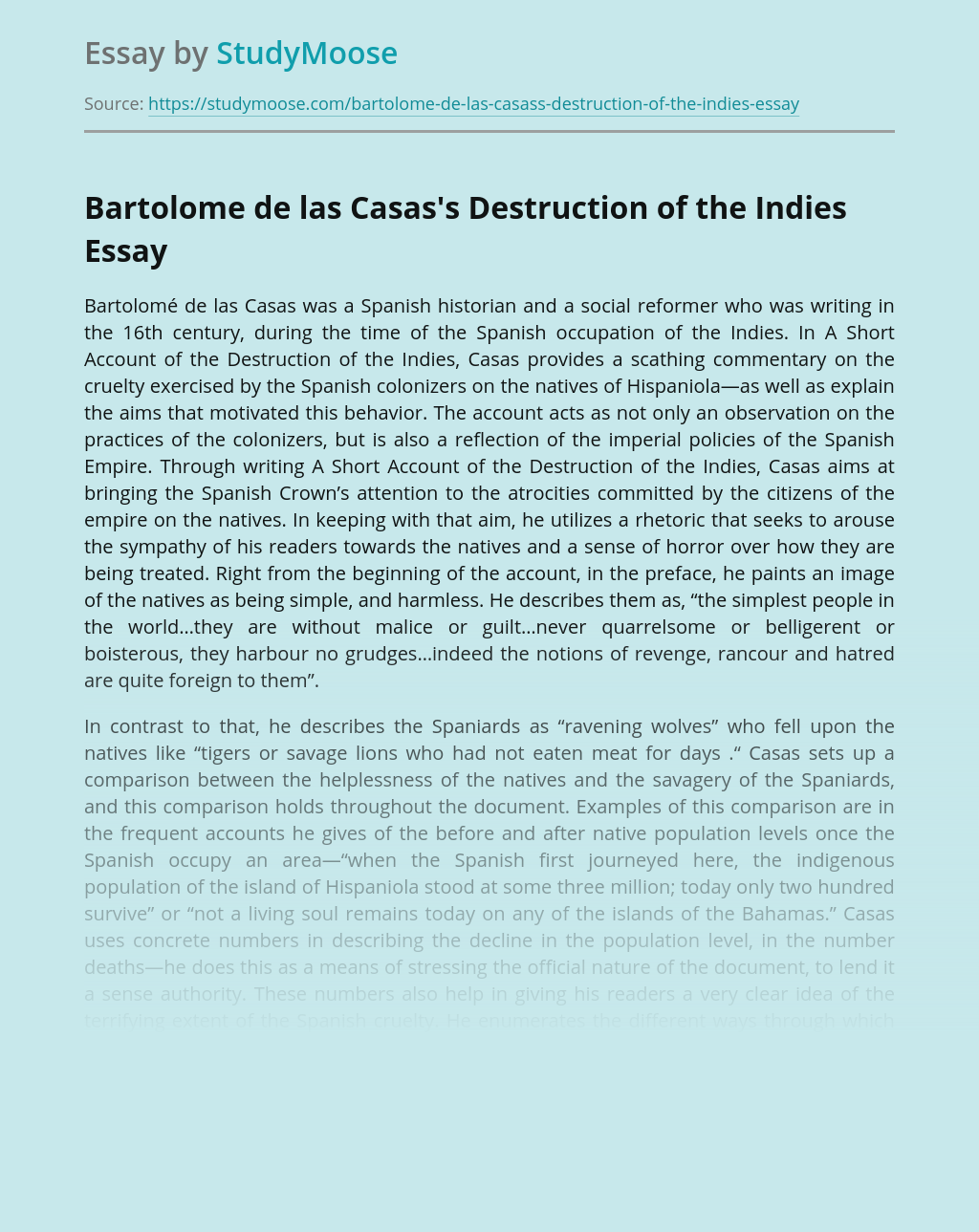