Analysis of Character in Watson's Talking in Whispers

In this essay I am going to examine the presentation of the character of Andres, the protagonist of the story. I shall begin by studying the physical description and the psychological/moral qualities associated with Andres in the opening chapters. I shall then show how Andres’ character develops and changes as events unfold.

In ch.1 we are given a brief physical description of Andres which helps us picture him throughout the rest of the book. We first see him when he has just escaped from the CNI who killed his friend and kidnapped his father.

Don't use plagiarized sources. Get your custom essay on
“ Analysis of Character in Watson’s Talking in Whispers ”
Get custom paper
NEW! smart matching with writer

He is described as frail with “all sharp angles- bony shoulders, wide hips” (p.12) It also says that:

“He was lithe and balanced, light on his feet, agile, but most of all his physique suggested staying power and resilience “(p.13)

In this sentence the narrator is relating Andres’ outer appearance to his personality.

Andres’ eyes are frequently described and James Watson uses them to help reflect his inner feelings (‘the window of the soul’).

In ch.2 after the description of the Black Berets shooting the youth the narrator comments:

“Andres swung round. There were tears in his eyes. He saw the slumped remains of somebody’s son.” (p.33)

By describing his tears it suggests that Andres is sensitive and feels things deeply. It shows that because of his own sufferings he can easily relate to other peoples’ sufferings. This also helps to fuel his determination to overthrow the Junta and bring an end to injustice.

“He stared at the world as it passed and his eyes grew more fierce, the knot of anger inside him more tight.

This further describes Andres’ passion and intensity while relating to his eyes. Andres thinking back to what Braulio used to say also makes the descriptions more vivid.

“You’ve got a stare that makes rivets melt.”(p.13) and “Just be careful that with sparks like yours you don’t set people alight. ” (p.14)

The description of Andres’ personality is not only given through his physical description. The narrator often directly comments on how Andres feels (e.g. “he felt a wretched sadness”(p.32)) and we are often given an exact copy of what runs through Andres’ mind.

We are often made aware of Andres’ determination which was originally described in the physical description:

“All at once he had a purpose, a direction, a next step… Somehow I must contact the resistance.” (p.42)

His feelings are also reflected in the responses of other characters; In Chapter 2 Beto says to Andres “You’re gelignite, Towny” (p.28).

The character of Andres is also reflected in his actions. His determination and passion are conveyed in the description of his movements when he has difficulty in controlling himself, “Andres fought to hold his anger” (p.27) and “Andres lunged for his mother”.

Throughout the book Andres remains both committed and determined. He never wavers but pursues his goal. His sense of justice or duty to the dead is strengthened by events.

In ch.2 a photographer hands Andres his camera as he is dragged off into the stadium. Throughout the rest of the book Andres is trying to get the pictures printed to tell the world of the horrors of the Junta.

With the unfolding of events Andres’ character undergoes a transformation, he becomes less impulsive and more self-controlled as he becomes aware of the dangers around him and his responsibility towards others. During the torture scene he endures hours of suffering and electrocution and does not say a word to the Junta.

He also develops a relationship with Isa which seems to present a different side to Andres, a more mature side. The relationship creates a theme of love, care and selflessness. This also helps him to fuel his determination and gives his mission a further purpose.

In conclusion the character of Andres is associated with sensitivity and determination. He is committed to a cause and has compassion for the suffering. These characteristics are conveyed through a variety of methods including physical description, narrative, dialogue and action. Andres is portrayed vividly throughout the whole book and this means we can identify easily with him and we sympathise with his cause. The description of Andres’ character can be seen as an effective means of conveying the deeper messages of the text which include the need the need to actively fight social injustice and to never to give up the struggle, whatever the cost.

Analysis of Character in Watson's Talking in Whispers. (2016, Jun 21). Retrieved from http://studymoose.com/analysis-of-character-in-watsons-talking-in-whispers-essay 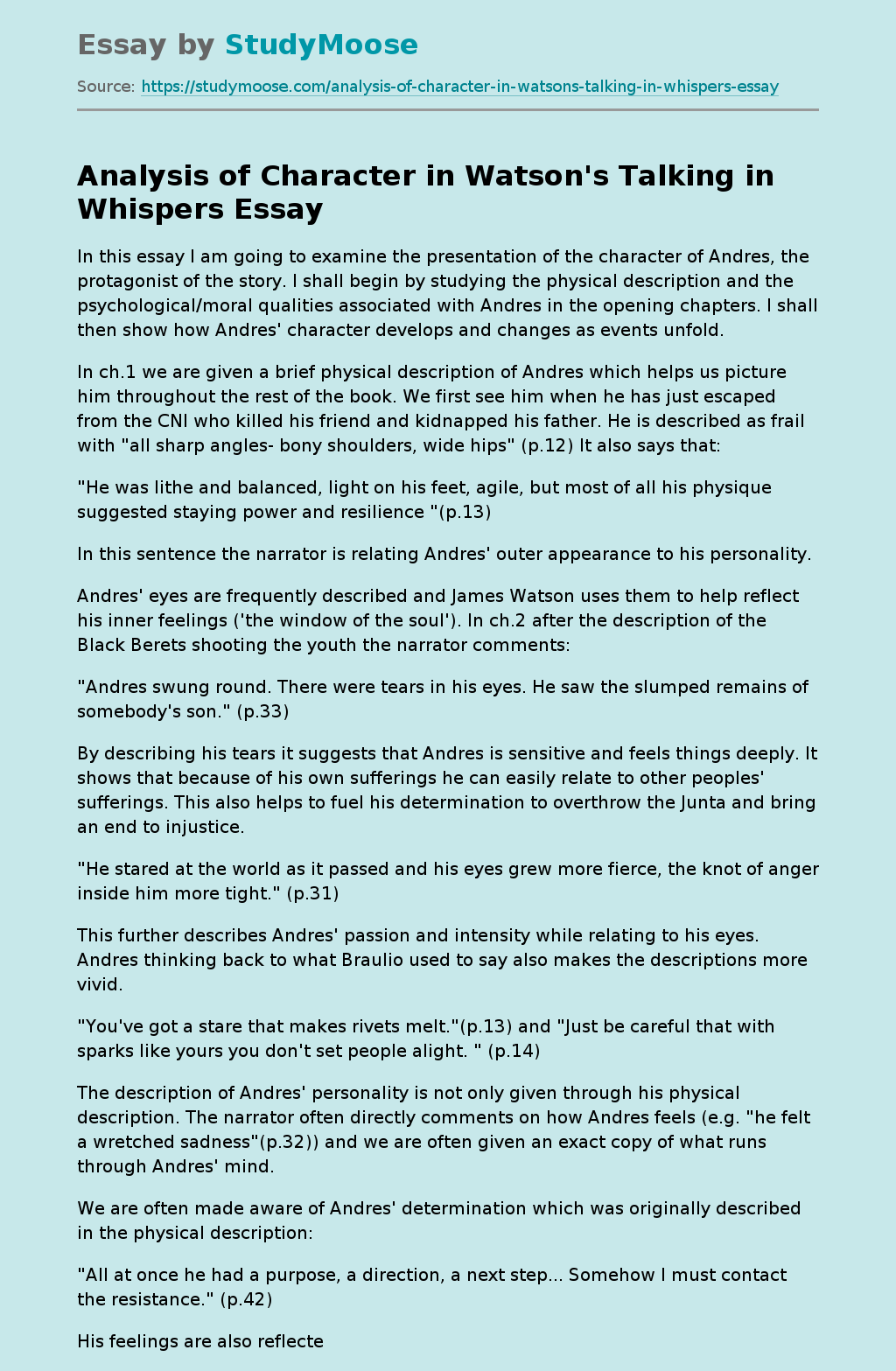