The title of the chapter ‘Pursuit and Escape’ is a cliff-hanger itself, because the title immediately gives you the impression that Bill Sikes escapes, and that is what the whole audience doesn’t want, so it makes it more interesting and makes people want to read on and find out if Sikes does escape or not, which is dramatic entertainment.

The story itself is gripping, which has many meanings, the book reflects Dickens’s life and how he grew up, Dickens was born in Portsmouth in 1812, his parents were poor and he had a very upsetting young part to his life, after spending a happy filled time in Chatham his father John Dickens fell into financial problems and had to move to a derelict area of Camden Town, Charles had to get a job and he worked in a blacking factory, which is relevant to the story, as Oliver worked in one.

Don't use plagiarized sources. Get your custom essay on
“ Analysis of Chapter from Dickens’ Novel Oliver Twist ”
Get custom paper
NEW! smart matching with writer

Charles worked hard and for a living, visiting his dad one day a week in debt prison and working the rest, you cant help to think that Dickens work comes from his own background and the way he grew up, but with a tale involved.

The time this book was published was in 1838, but the book took shape in the Bentleys Miscellany, which was one of the most popular papers around in that time, which was where Dickens entered an episode every two weeks, each episode was about 9000 words in length.

The book really showed its audience about London and what problems lie there.

Dickens entry’s every two weeks were always ended on a cliff hanger, take chapter 50 for example, it ends with Sikes’s death and his dog Bulls Eye jumping off a building and dashing its brains on the floor, which is a shocking ending but wants the reader again to want to buy the next issue and read on.

Dickens use of dialogue to create realism and variety through be able to change a person by their criminal language, or ‘flash’, when you hear Kags, Chitling and Toby Crackit talking, you right away can notice a difference in speech compared to all the other characters in the book, words used like, ‘blunder -head, made our lucky up the wash’ us chimney’, which means a chimney that’s full of traps, you see Dickens couldn’t swear or use blasphemy in his work because of the audience he was sending it out to, the Victorians didn’t take very likely to such words, so Dickens used substitutes for it, such as ‘by G–!’ which is supposed to say by God! Also the use of slang, the language of the criminal class, ‘strait-wescut which is a straight jacket or ‘this is a smash’ which is typical cockney rhyming slang in east end London common among thieves. Dickens dialogue also gives the reader additional information, e. g.

Fagin being arrested at The Cripples which was a pub all the locals went to, especially the criminal cockney types, and the fate of the rest of the gang, Dickens didn’t write about them directly because he wanted suspense and use a flashback scene , on page 488 Chitling has a flashback, ‘you should of heard the people groan’, said Chitling, ‘the officers fought like devils, or they’d have torn him away. He was down once, but they made a ring round him, and fought their way along.

You should have seen how he looked about him, all muddy and bleeding, and clung to them as if they were his dearest friends. I can see ’em now, not able to stand upright with the pressing of the mob, and dragging him along amongst ’em; I can see the people jumping up, one behind another, and snarling their teeth making at him; I can see the blood upon his hair and beard, and hear the cries with which the women worked themselves into the centre of the crowd at the street corner, and swore they’d tear his heart out!

Which is showing Bets ordeal when she was dragged away in a straight jacket in a flashback that was not described in the early parts of Oliver Twist, this is used to explain to the reader and sort of add more pieces, or the missing pieces to the ‘puzzle’. Also Dickens informs the reader about the brutality of Nancy’s murder so the death of Sikes was a justice for her death and it shows how the Victorian society deal with murderers and criminals.

He uses dialogue to show the different relationships between the characters, the arrival of Sikes page 491 into the upper room is key, Sikes is sarcastic in his manor towards the other three criminals, former friends, they seem scared of Sikes because of the ear that Sikes is a murderer and that he can get them in serious trouble. The intimidation of Sikes changes the whole scene, ‘Damn you all!’ which is showing Sikes aggression, ‘Have you nothing to say to me? ‘ Sikes presence keeps the men silent, the situation Dickens has created with a dark room with only one candle and three men just waiting around, hanging low for a while immediately gives the scene a sense of fear and uneasiness, and the climax of the scene is when Sikes comes in and then the scene benefit’s the character and exploits the intimidating aspects of Sikes.

When Bates stands up to Sikes, it’s a key turning point, the dialogue used is heroic from Bates, speeches such as, ‘ witness you three – im not afraid of him- if they come here after him, ill give him up; I will. I tell you out at once. He may kill me for it if he likes, or if he dares, but if I am here ill give him up. Id give him up if he was to be boiled alive. Murder! Help! If there’s the pluck of a man among you three, you’ll help me. Murder! Help! Down with him!’ this speech is so inspiring and heroic that the reader gets really excited at this point and is left with astonishment that a young boy could do such a speech and the actions the follow when he pounces on Sikes. This is used to move the story on and create tension in a very gripping way.

Another classic of Dickens’s work is the descriptions he gives of characters for example, Kags who is described in a way that reminds the reader what criminals actually look like and gives the reader a very edgy feel, ‘the third a robber of fifty years whose nose had been almost beaten in in some old scuffle, and whose face bore a frightful scar which might probably be traced to the same occasion. This man was a returned transport, and his name was kags’. A very long description but gives you a lot of ideas of what life was like in these times, a returned transport which is a term used to describe convicted thieves that have been sent to other British colonies such as Australia and serve a certain amount of time there for their felony.

The immediate impression of Kags when you read the description is that he may not be a likable character, I think dickens’s has used this character to show that in Chapter 50 Page 490/491 when Sikes enters the darkness filled room how much, you could say prestige in a way but not in a good way, a sort of fear and prestige, showing that even the meanest looking and ‘hard’ characters in a sense are baffled and afraid of Sikes and this all is creating a mood and feeling in a scene. 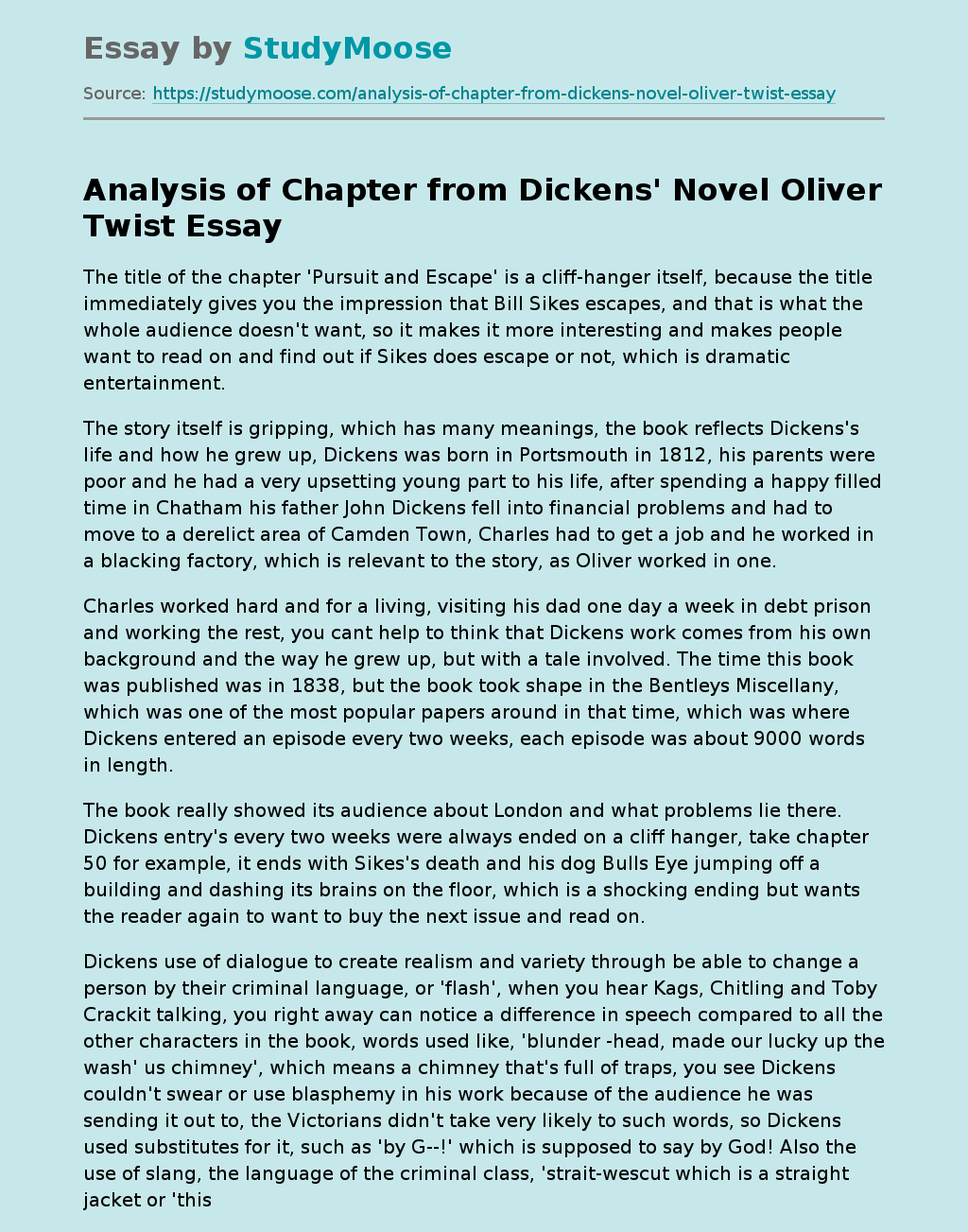