Brave New World by Aldous Huxley is a futuristic novel about a seemingly perfect society where pain and suffering have been eradicated. The society follows the motto “community, identity and stability” (Huxley 1). Many critics compare it to the present day society of North Korea due to its shared extremist government. In both societies, freedom is limited as everyone’s life is predetermined. Citizens follow their predestined identity, lead stable lives, and live in ignorant bliss as a community. Both North Korea and the New World Order follows similar tactics to control their citizens as seen by them predetermining their citizen’s role in society, presenting the illusion of stability, and separating those who present a threat to society.

Don't use plagiarized sources. Get your custom essay on
“ Analysis of “Brave New World” by Aldous Huxley ”
Get custom paper
NEW! smart matching with writer

Brave New World begins by explaining the prenatal conditioning in their society that helps sort people into five castes: Alpha, Beta, Gamma, Delta, or Epsilon. Through biological manipulation, the Alpha embryos are conditioned to become the leaders and thinkers of their society. The succeeding casts are conditioned to be slightly less physically and intellectually capable, which is done by reducing the oxygen flow.

Once they become children, they are conditioned to think that this process is the only way to guarantee stability and harmony, and are programmed to dislike certain things to make them more compliant. This is where it becomes clear that suffering and pain have been eradicated for the price of freedom. Similarly, North Korea preconditions its citizen’s life to suppress and eliminate threats of revolt. If they begin to develop personal thoughts and ideas, people begin to realize of the imperfect and appalling way they are being governed.

The country of North Korea has since the 1950s established and enforced the Songbun System which determines a person’s social status based on their family’s history. The Songbun System was created to protect the Kim regime’s image by eliminating any internal political threats. There are 51 songbun levels, and the different levels determine a citizen’s educational opportunities, occupation, treatment by the criminal justice system, amongst other things. The lower the songbun level is, the harder and more challenging a person’s life is . By predetermining their people’s lives, they can guarantee complete control over their future (Ilmer 2018).

After choosing their citizen’s place in society, the government has to present the illusion of security. In the case of North Korea, the government uses propaganda while the New World Order uses medication and psychological conditioning to promote wellness. North Korean’s are told they are the purest of races due to their unprecedented history and landscape. There are hundreds of posters plastered around the cities showing their ruler Kim Jong Un as a savior of the country. They are taught from a young that the outside world is evil and that Kim Jong Un’s government is saving them from the outside destruction. In the New World, it is evident to the reader from the beginning that the World State brainwashes its citizens to remain obedient, and suggest the reader should be skeptical about how truly utopian the society really is. They follow sleep teaching methods used to teach children the morals of the World State. While children nap, a whispering voice repeats a lesson in “Elementary Class Consciousness.” Additionally, Bernard begins to feel the limited freedom and wonders why it is like this. Lenina insists that they have much freedom – the freedom ‘to have the most wonderful time’ (Huxley 46). She believes this because of the drug they have to take called Soma. Soma puts people in a hypnotic state in which they no longer feel as though they should ask questions or defy the structures of society. Bernard insists that this is no freedom at all and a mere joy-inducing pharmaceutical illusion. Both societies have been conditioned from a very young age to believe that what the government is enforcing is the best thing for them and thus settling.

Any threats to society are quickly regulated and controlled in both governments. In Huxley’s society there are savage reservations outside of the society, with people who were not born the “right way”. They have “unfavorable climatic or geological conditions and poverty of natural resources”(Huxley 162). The government has built an electric fence to preventing the savages from leaving or mixing in their society, however, the government does allows for its citizens to visit the reservation to show them that they do not want a life full of pain and deathly emotions. Unlike in World State, residents of the Reservation grow old, have disease, hunger, and treat each other with cruelty.The people in the World State are ignorant of the truth. They believe that a stable society is best when you can use a drug “to calm your anger, to reconcile you to your enemies, to make you patient” (Huxley 213). Through drugs and conditioning, the government has kept the World State uninformed of the truth. Both the World State and North Korea contain their citizens by showing them how their lives can be if they don’t follow their statues. The World State cases a civilization of savages to demonstrate the fortunate life their citizens live by showing them the dangers of experiencing emotions. While in North Korea it is not showcased, it is well known that defying the government results in punishment and incarceration in their brutal camps. Both regimes have special locations for those who don’t fit in their society. In North Korea, there are five political camps where thousands of people remain improsened for defying Korean law and showing disloyalty to the Kim regime (Lankov 2017). Often unaware of their supposedly crime, and even children who are born in the camps are raised as convicts where forced labor, beatings, and death are common. These reservations are used to separate those who do not follow their government’s regulations or are a political danger to the administration and thus are locked away to prevent them from gaining more support. Both societies have communities of people they separate from their societies to prevent any major uproar from their people.

By predetermining social class, providing the illusion of stability, and eliminating any threats to their regime, both North Korean and the society in Brave New World control their citizens and present a perfect society or utopian. Even if hatefulness and suffering gone, it is clear that it comes with limited freedom and thus the reader should be doubtful about how truly utopian the society really is. Huxley brilliantly created a dystopia in the superficial disguise of a utopia. The purpose of their society is for people to ultimately be happy, however, it is an empty illusion. Which is why, although utopian societies mean well, they end up limiting people’s freedom and trying to achieve unrealistic perfection leading it to being a dystopia. 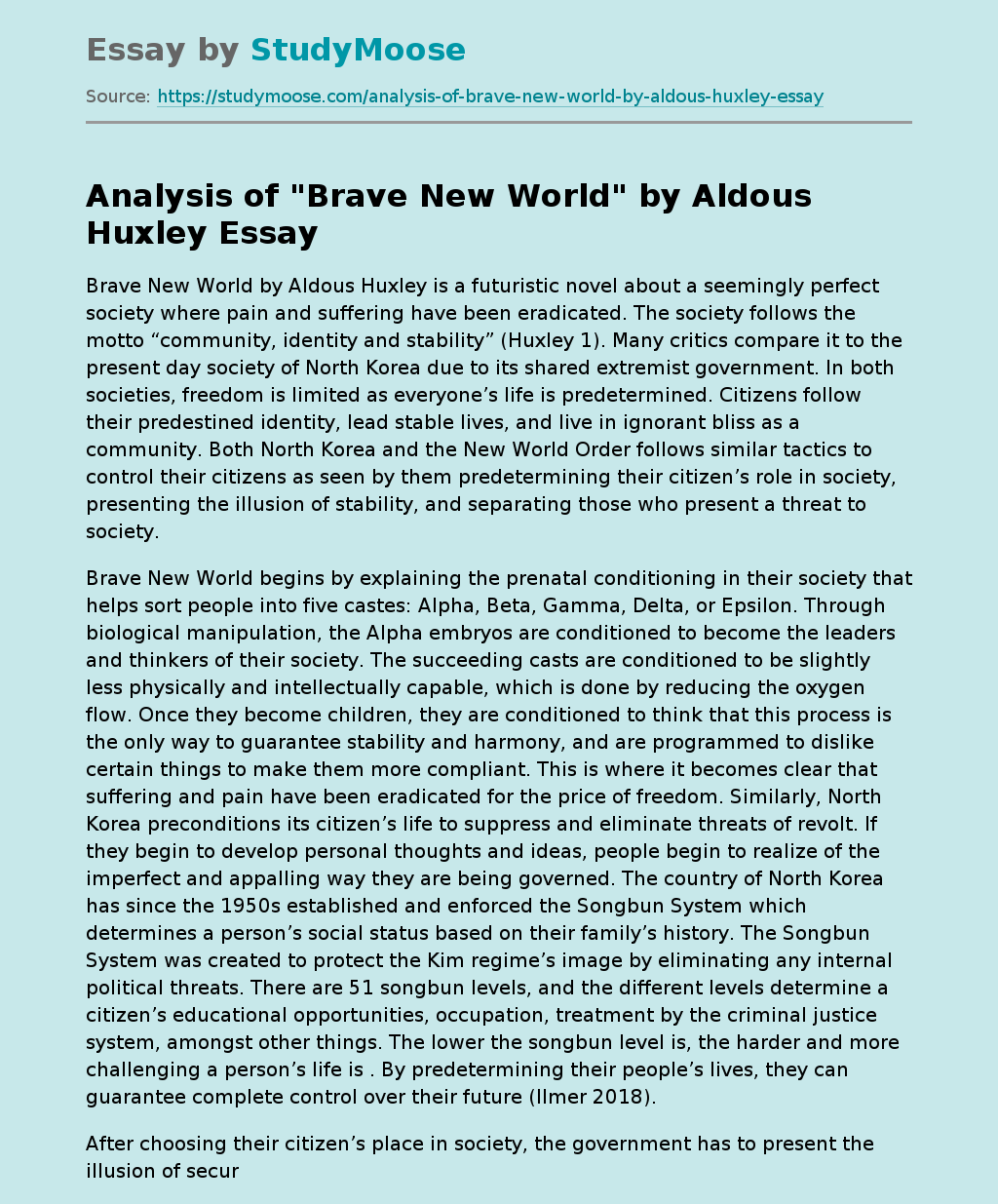