The intelligent, charismatic Al Gore travels the world sharing his compelling and cautionary story of the threat the earth and all of its creatures face in global warming. In 2006, this story was made into a motion picture, titled An Inconvenient Truth. The rhetorical devices used in this film are the key element that Gore uses to grab the viewer’s attention and make them truly understand what this threat means and its potential effects on Earth. Gore uses ethos, logos, and pathos to make the film intriguing and captivating so that the viewer is absorbed in the film and can comprehend the information that Gore is trying to convey.

Turn in your highest-quality paper
Get a qualified writer to help you with
“ Analysis of Al Gore’s An Inconvenient Truth ”
Get high-quality paper
NEW! AI matching with writers

Gore uses ethos to give him credibility during his speeches, so that the audience respects him and the concepts he is trying to explain. Even the way Gore is dressed and the way he presents himself gives him integrity and authority. He is dressed in a very presidential looking suit and presents himself graciously and proudly.

Gore brings up the fact that he was the democratic presidential candidate in the 2000 presidential election against George Bush. He briefly mentions in a scoffing manner the fact that he was declared the winner of the election, before the decision was taken back and Bush was confirmed as the president weeks later. The fact that he was very close to winning a presidential election adds to the reverence the audience possesses for him. Gore has also been a vice president and a member of congress for several years, giving him experience in positions of power and the authority to instruct the public on the issues of global warming and how to prevent the issues from progressing.

Pathos is a very common element in Gore’s An Inconvenient Truth. Gore explains the way his son was in a near-fatal car accident and the death of his sister to lung cancer. Both of these incidents create sympathy in the viewer for Gore. This sympathy that talking about these delicate subjects create causes the viewer to be more willing to listen to Gore and help him fight global warming. Pathos is also used when Gore is discussing topics such as hurricane Katrina and other natural disasters. Clips are shown of confused, hurt people and their destroyed towns while somber music plays in the background and Gore continues to explain how these natural disasters were caused by global warming.

The effects that these harsh images, paired with mournful music, are drastic on the human conscience. Our morality is challenged and we cannot help but feel the need to help these people in danger. Gore uses these elements to get people worked up about this issue. When shown the real life effects global warming can have on humans, people seem to understand how large this threat truly is. Another way Gore uses pathos is when he is using diagrams and charts to show the effects of global warming over time. The charts he uses take up the entire stage, and when Gore stands next to them, it allows the viewer to see how drastic the changes that have occurred really are.

Logos, lastly, is also used by Gore in the film. He not only uses expert opinions to support his case, such as scientists agreeing that global warming is real and a problem, but he also uses colorful, interactive, and large charts. Later, he shows how natural disasters that occurred all over the world hit world records for size and frequency, proving his point that global warming is real. Also, he makes a point to mention that temperature highs have all happened recently, which he believes is due to global warming. All of the logos in the film is used reasonably and cause the viewers to understand Gore’s stand point, and possibly agree with or believe it.

Throughout the film, with the use of pathos, ethos, and logos, Gore supports his case of global warming being a real threat. The director’s efforts towards shots, colors, and contrast are just an addition to Gore’s wonderful writing. Both made the film a shocking revelation for most viewers. 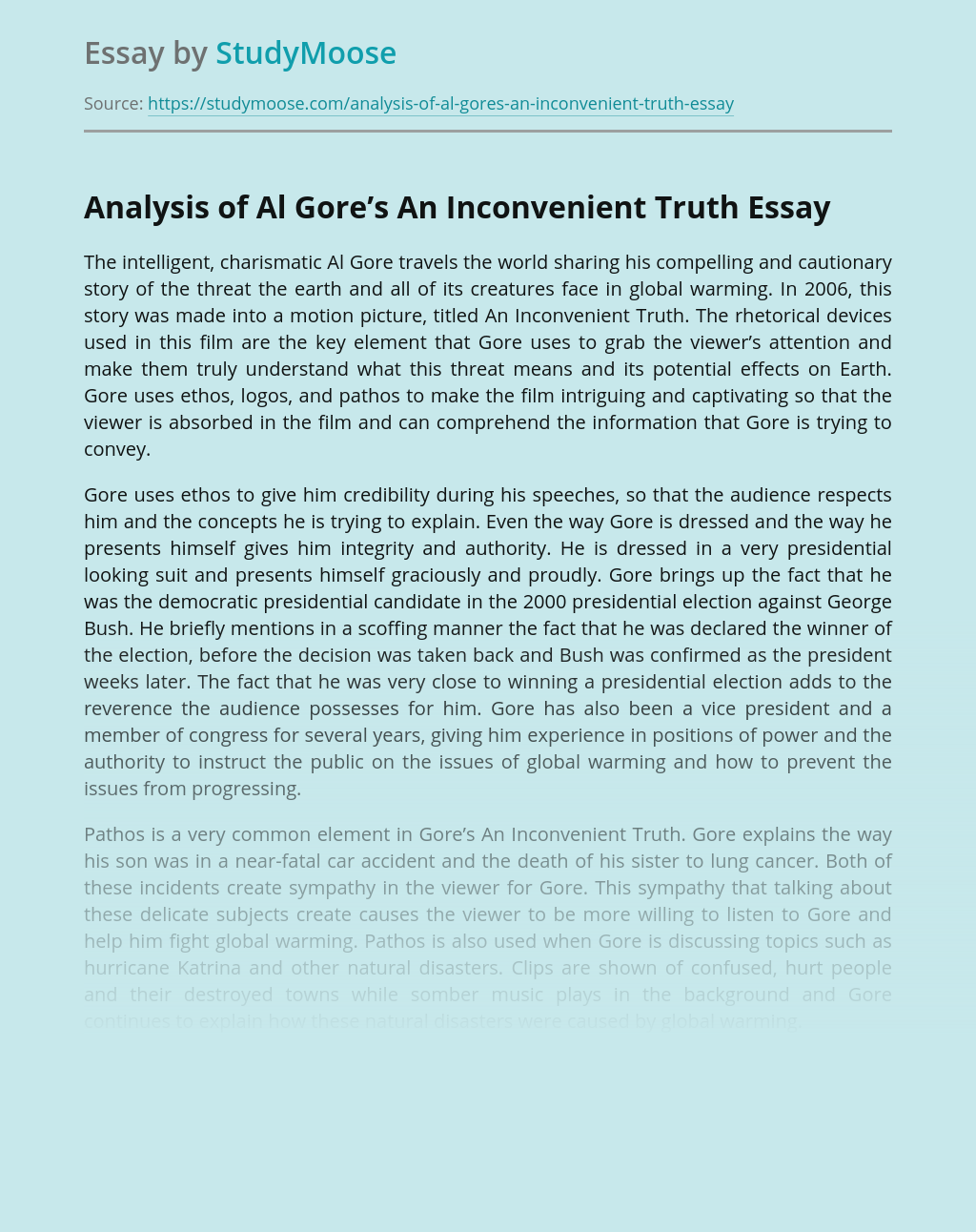 Turn in your highest-quality paper
Get a qualified writer to help you with
“ Analysis of Al Gore’s An Inconvenient Truth ”
Get high-quality paper
Helping students since 2015
Stay Safe, Stay Original