Analysis of a tabloid newspaper

A tabloid newspaper is in the shape of a tablet and is approximately 30cmX37cm. The newspaper I have chosen to study is The Mail. This newspaper was brought out on January 26th 2003 and is priced at i?? 1. 10. On the date of January 26th 2003, the main headline on the mail was Arrested in the Cockpit. The first time I looked at this newspaper, the part which catches my eye is the special offer, A week in the Sun, as it is in bold, bright colours with a coloured background and is at the top.

Don't use plagiarized sources.
Get Your Custom Essay on Analysis of a tabloid newspaper Just from $13,9/Page

The news item, which catches my attention first, is Arrested in the Cockpit.

This takes up a large space of the front cover of the tabloid and is in bold. It is also the only news story on the front except the photograph and a caption, which are related to a different news item. The newspaper uses a lot of colour to announce their offer that is on.

This catches your eye even before the news headline. The writing on most of the front cover of the tabloid is large and bold, except a small start to the story, which gives us a glimpse of what the main headline is about. The headlines are a lot larger than the writing as they are trying to catch the readers’ eye.

The writing at the bottom is less significant, so it is a lot smaller. On this newspaper, the picture is at the bottom, and is very emotive, showing upset families, which bring people to the newspaper. The only logo on the front of the paper is the newspaper name at the top of the tabloid, The Mail. The logo is in old-fashioned style writing, and has a complex crest with writing in Latin on it. This explains that the paper is an old fashioned newspaper, whereas a tabloid such as The Mirror or The Sun uses new style font, sans serif, which makes it look a lot more modern.

The only advert on the front of the tabloid is the offer, which takes up a large section of the paper. This is also the main focus of the page. The words used are very strong such as Thousands of fabulous holidays at amazing prices, which is trying to make people buy the newspaper, as the offer could be appealing. Half the page is devoted to the news items, but is mainly a headline with only a paragraph of writing at the bottom. There is also a photo and a caption about a different story inside the paper.

Looking at the content of the page, you can see that the newspaper is reflecting the views of the police. You can see this because of the language used in the paragraph and the headline. Police drag drunken BA pilot from Controls Of Airliner The words Drag drunken pilot shows that the pilot was defiantly in the wrong and the police were the good people. The caption, which is with the picture shows that the newspaper feel sorry for the father as it uses the words awesome superb dad. This shows they are using some emotive language to get people to feel sorry for the family.

The language used isn’t very formal as it is meant to be read by the wide variety of people whereas Broadsheet newspapers such as the Financial Times is very formal as it is only read by certain people who are often formal themselves. The newspaper also uses very emotive language throughout the paper to put across certain messages depending on who’s side of the argument the paper is taking, and which views they are trying to put across. They often exaggerate and make the wording more dramatic than it is to make the language more emotive.

I think the target audience is the ages between 18 – 45 and from the middle and lower classes. It doesn’t use formal language, so it can be understood by less educated people. I think it is aimed at both sexes, whereas Tabloids such as the Sun are probably more likely to be aimed at men as the language and photos are more for their tastes. I think the audience are meant to be drawn to the newspaper by the colours and words of the advertisement on the front of the paper, which takes up half the front cover of the tabloid, is the only writing in colour, and is in bold, Sans serif writing.

The title is also in large, to drawn the audience to the newspaper, and it always uses emotive words, such as arrested, horror, terror and shock. By looking at the newspaper, and analysing the layout, content, language and audience, I can see the different reasons for each decision that the newspaper has made. The newspaper uses large bold writing for the Main news headline, to draw the attention of the reader, and uses emotive language to get the reader involved. Much of the front cover will not be small writing, maybe just a paragraph to introduce the story.

Bold colours and writing are used at the top of the paper, to advertise and draw attention to the newspaper, and a photo maybe used to complete a story, or show another story, which is inside the newspaper. My Newspaper Design The newspaper I am going to create will be The Mail as this is the newspaper tabloid, which I researched and analysed. Nearly half the page will be an advert for cheap holidays, which will be in bright, bold colours, so this attracts people to the newspaper. My story will be on the documentary of Michael Jackson, but will be aimed against the TV programme, and for Michael Jackson.

My headline will be one word Betrayed in capital letters and bold, so it stands out. I think this word is quite powerful on its own. I will have a close up photograph of Michael Jackson’s face and a quote next to it, spoken by Michael Jackson. I will also have a paragraph next to it, which will be the beginning of the story, which is carried on further in the newspaper. The front cover is then finished off with some lines, which separate the stories, and the newspaper and make it look more professional.

Analysis of a tabloid newspaper. (2017, Aug 04). Retrieved from https://studymoose.com/analysis-of-a-tabloid-newspaper-essay 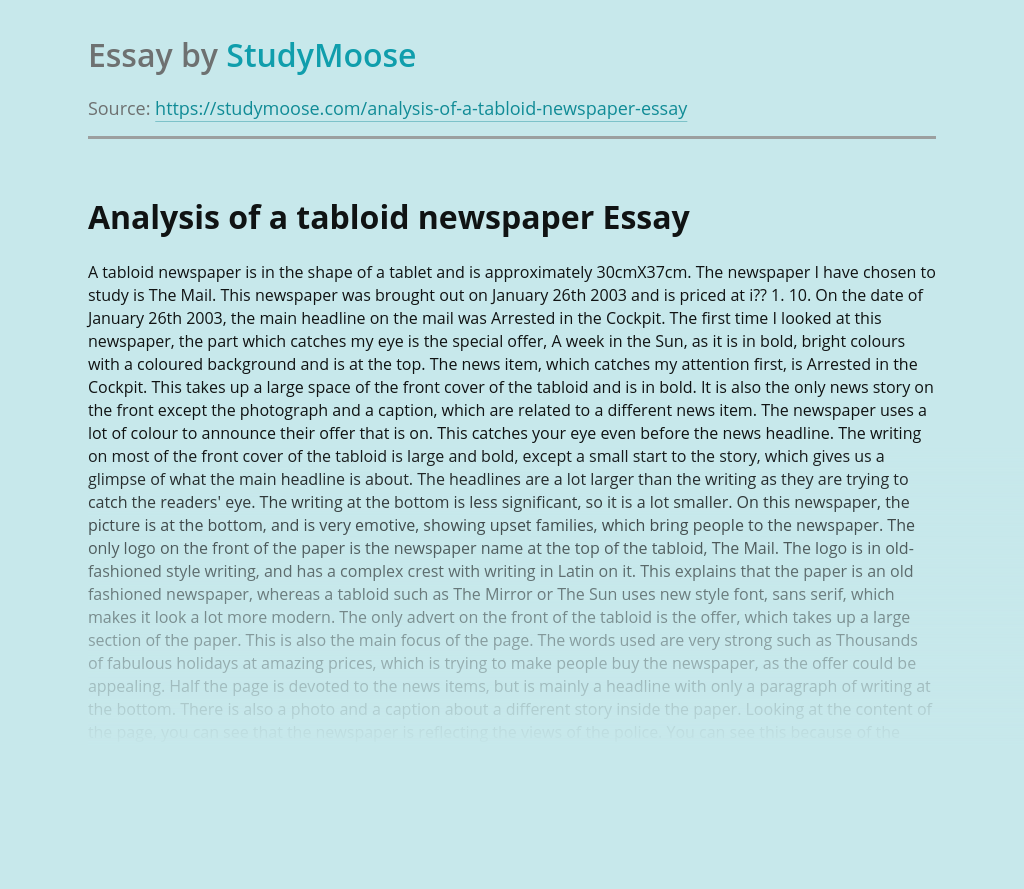 For publicly traded companies, the Sarbanes-Oxley Act of 2002 requires an audit of internal controls. The purpose of an internal control evaluation is to evaluate risk, which offers auditors a basis for audit planning and provides useful information to management (“Sox Law”, 2006). Auditors typically use the five basic components of internal control to approve...

Save this file in your course folder, and name it with Assignment, the assignment letter, the section number, and your first initial and last name. For example, Jessie Robinson’s assignment 1R for Section 1 would be named Assignment1RJRobinson. Type the answers to the assignment questions below. Use complete sentences unless the question says otherwise. You...

Reflective Essay On Fundamentals Of Macroeconomics

In this essay I will describe the fundamentals of GDP, unemployment rate, inflation rate, and interest rate. Also I will be explaining how some common occurrences such as buying groceries, massive layoffs, and a decrease in taxes affect the government, businesses, and even you. Lets start with GDP. What is GDP you ask? GDP stands...

This satisfaction and euphoria that accompany the successful completion of any task would be incomplete without the mentioning of the people whose constant guidance and encouragement made it possible. We take pleasure in presenting before you, our project, which is result of studied blend of both research and knowledge. We express our earnest gratitude to...