Analysis of “A Rose for Emily” by William Faulkner

William Faulkner had a very chronological way of writing this story. “A Rose for Emily”. The rose could have been identified in many ways. Faulkner left “Rose” open for the readers to come up with a conclusion of what the “Rose” could have been. Miss Emily Grierson, a person who is trapped in a world of delusion that cause her to withdraw from society. Emily never received any kind of psychiatric treatment after her father died. Many people believed that” Emily was humanized” (84).

Don't use plagiarized sources. Get your custom essay on
“ Analysis of “A Rose for Emily” by William Faulkner ”
Get custom paper
NEW! smart matching with writer

In the civil war for when Faulkner wrote this short story “A rose for Emily” he doesn’t come out right saying that Miss. Emily was sexually assaulted by her father, but with all the different acts and signs shown Emily vindictive of Mental Illness and psychological state of mind.

After Emily father died a few of the ladies in the town of Jefferson gathered among themselves to call being sympathetic wanting to give Emily their condolence and help in which they were accustomed to doing when there was death in the town.

Her dad is the main man with whom she has any type of relationship with, so after her dad has passed on, she can’t concede the reality of his demise. Emily did not allow the people to come in the house instead she would meet them at the door with no signs that she was grieving over her father’s death.

After, three days of this going on she allowed the ministers and doctors to pursue her to dispose of the father’s body.

The people of the town didn’t want to call Emily crazy because they believed that she was able to do that, it was the only thing she had left of her father. The women thought back on every man that tried to get close to Emily, her father ran away. The perception that the people had of the father showed how overprotected he was about Emily. The controlling father left his daughter in a miserable state that she never knew about no other man but her father, she was still single at the age of thirty.

The town of Jefferson started some construction work in the summer after the passing of her father. The work of sidewalks begins, a construction work by the name of Homer Barron appeared. Emily took to homer quick, things between people in the town started seeing more and more of Miss Emily and Homer. The people of the town were glad to see Miss. Emily out on the town with Homer.” Of course, a Grierson would not think seriously of a Northerner, a day laborer” (85). Nevertheless, to say the town saw Miss. Emily and Homer on Sunday afternoons driving around in a yellow-wheeled buggy.

The people in the town of Jefferson grew a concern after a while they couldn’t believe that Miss. Emily was seeing this guy Homer. Homer which had been spoken of that like he liked men. The people started saying” Poor Emily”. Some felt that she should have some of her next of kin to come see what was going with her. Why was it a dying need for some of her kin people to come now, and not to be present when her father passed? Was it something the people knew?

Miss. Emily had guest to arrive. Two of her girl cousins came to visit. During the time the visit Emily went to the local drug store to buy rat poison. The suspense came on real strong is she really that mental to kill her cousins for visiting. No one knew what the rat poison was for. In fact, Emily did know what kind of rat poison she wanted. All Emily knew is that she wanted the best rat poison they sold. The druggist wanted to know what Emily wanted the poison for? She could not tell him, yet she just starred at him. “Her head tilt back in order to look him eye for eye, until he looked away and went got the arsenic, wrapping it up” (85). The druggist did not return, he sent a negro to deliver the package.

Well if she couldn’t tell couldn’t tell him what the poison was for, who was she trying to kill? The people of town made a statement saying, “She will kill herself” (85). Why would the people of the town make such a statement? They also felt it was the right thing for her to do by killing herself. The people also thought of Emily and Homer as a disgrace riding on Sunday evenings with distasteful images. They were for sure she would marry Homer; the people of the town thought the Miss. Emily would persuade him into marrying her. Although, Homer supposedly liked men.

After completing the work in the town, the people thought homer had left to prepare living arrangements for Miss. Emily and himself. In the meanwhile, Miss. Emily still had family members in town. Quit naturally, she wanted them gone and so did the people of the town to see if Homer Barron would return for his alleged wife. The people in Jefferson learned that Miss. Emily had we had went purchased Jewelry and clothing for homer. Everyone was geared for a big wedding celebration. The reader will be astonished about how Emily had her road to destruction and self-destruction. Emily’s marriage to homer ends up unthinkable, after she learned that homer was not interest in marrying her. In her mind she had done purchased all this stuff to be married. Surely, a marriage must take place. Miss. Emily made numerous attempts to make a homer a prisoner of love.

“A neighbor saw the Negro man admit Homer at the kitchen door one evening at dusk. And that was the last the people of Jefferson saw Homer Barron. And of Miss. Emily for some time” (86). Emily only from time to time shows up in the city and her front entryway stays shut. more than forty years after the fact, after Emily’s death, individuals are astonished by the reality that Homer did not vanish but rather they find him dead in a bed that was once known as Emily’s mystery room. This room known as the mystery room had gatherings to their marriage chamber which Emily has gently arranged.

In the beginning of the story Emily watches guys leave from out her yard, these was the guys that put lime around Miss. Emily house. People of the town would see Miss. Emily from time to time in the window. “Then we knew it was to be expected too; as if the that the quality of her father which had thwarted her woman’s life so many times had been too virulent and too furious to die”(86). In this point of the story the new generation of people withheld their children from going to Miss. Emily for picture painting. Miss. Emily withdrew herself from society, she would not even let the free postal delivery put letters on the house. Miss. Emily doors remained closed until she died at the age of seventy-four.

Throughout the years Miss. Emily would send the Negro to the market. The older he got the grayer he got as well. Every year the town of Jefferson would send Miss. Emily a taxpayer letter in December, only for the letter to be returned to the sender. The people of town knew Miss. Emily was getting the mail because they would see her in the window. Only appearing in the windows down-stairs the people of Jefferson assumed that the upper part of the house had been closed off. The house once loaded with honorability is currently ‘an eye for a sore eye’ (Faulkner, 1977), which proposes that Grierson family home has been declining for some years. The starting sets anticipation of the entire story and prompted pursuers’ enthusiasm to be aware of the secretive house, entertainer, and story.

Miss. Emily has been sick for a while fell ill in the house that was full of dust, where this negro man waited on her. Miss. Emily died in the downstairs bedroom laying in a walnut colored bed. After Emily’s death, individuals are astonished by the reality that Homer did not vanish but rather they find him dead in a bed that was once known as Emily’s mystery room. This room known as the mystery room had gatherings to their marriage chamber which Emily has gently arranged. Miss. Emily family members arrived to have a funeral service for her. The negro server let the people in and was never seen again in the town of Jefferson.

In conclusion, Emily went through a lot of different changes in her life. Being under the submission of her dad for a long time. Emily does not know how to be a common young lady. Her feelings are smothered, like a lethargic spring of gushing lava which won’t break out except if a start shows up in due conditions. Furthermore, the overprotection likewise influences the dad and little girl to depend on each other: the dad does not enable his little girl to wed some other man while the girl additionally accepts her dad’s control as a sort of assurance and security, so she denies tolerating his death and she cannot live on the planet with a sentiment of being seized and defenseless.

Miss. Emily had many psychological issues that made her killed Homer Barron and to withdrawn from society. Can one really identify what “A rose for Emily” truly meant? Was it just a flower for Miss. Emily at death? Did the rose symbolized “Homer Barron”? Did the “Rose” stand for love or affection?

Analysis of “A Rose for Emily” by William Faulkner. (2021, Mar 07). Retrieved from https://studymoose.com/analysis-of-a-rose-for-emily-by-william-faulkner-essay 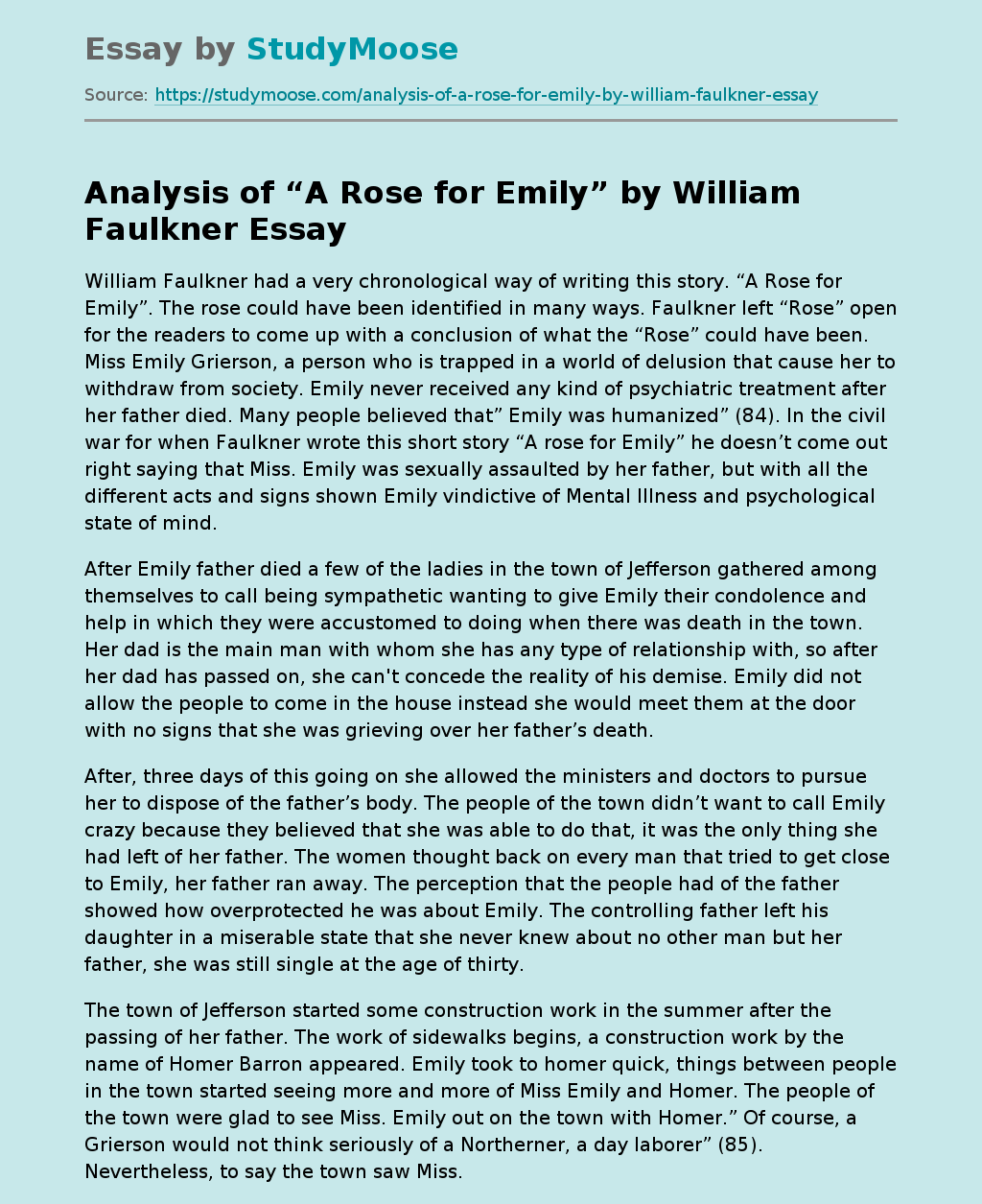