Truman Capote’s In Cold Blood is seen as a “true crime masterpiece” (acknowledgements), telling the story of the savage murders in the small town of Holcomb, Kansas. The two murders, Richard “Dick” Hickock and Perry Edward Smith brutally murdered the Clutter family, entering their home and performing the acts of robbery and homicide on November 15, 1959. In Cold Blood – for which became a six-year project- was marked as a new literary genre. The book was published in 1966 and was characterised as the first “non-fiction novel” (Colquhoun 1).

Don't use plagiarized sources. Get your custom essay on
“ Analysis “In Cold Blood” by Truman Capote ”
Get custom paper
NEW! smart matching with writer

In the novel In Cold Blood by Truman Capote, Capote outlines the theme of the consequences over greed shown from multiple elements of fiction.

Truman Capote remains as one of America’s influential writers of modern literature. Truman Capote was born in New Orleans on September 30, 1924 as Truman Streckfus Persons to Archulus Persons and Lillie Mae Faulk (biography.com). Mr. Capote’s novel In Cold Blood (1965) was “a true crime masterpiece” (acknowledgements), which he labeled as “non-fiction” (biography.

After his parents divorced when he was four, his childhood consisted of abandonment. Capote was often left in hotel rooms while his mother enjoyed “sexual exploits” (styard 12). Truman was not a regular teenage boy, but rather someone who enjoyed writing. Because of his ways, his mother would bully him. Capote’s stepfather on the other hand, supported him as if Capote was his son. However, Truman was careless and ignored his assistance. Nevertheless, Truman was adopted by him and was renamed to Truman Garcia Capote in 1935 (biography.

com). After all the nonsense, Capote moved to Monroeville, Alabama where he was cared for by his older aunts and cousins. Because of his solitary childhood, Capote turned to writing as a form of consolation. Harper Lee, a close friend of his, inspired and assisted him in his career (styard 12). He believed it would be no different of him if he created a new literary genre, non-fiction, aside from his literary classics. He was influenced by a 300-word article from The New York Times about the savage murders of the Clutter family in Holcomb, Kansas on November 15, 1959 (acknowledgements). Harper Lee accompanied Capote to follow the case of the accused killers in New York then to Kansas in March 1960. Mr. William Shawn of The New Yorker inspired Capote to take what would become an exhausting six-year project (acknowledgements). Even though In Cold Blood brought Capote wealth, he turned to alcohol and drugs. Subsequently, he died in Los Angeles on August 24, 1984 (biography.com)

The story In Cold Blood by Truman Capote is a well-known piece revealing the true story of the murders of the Clutter family in Holcomb, Kansas.
The first chapter entitled, “The Last to See Them Alive” creates a suspenseful tone between the characters who are unaware that their last day alive would be November 15, 1959. Herbert William Clutter, “the master of River Valley Farm” (Capote 5), was a forty-eight year-old prominent citizen of his community. Herbert raised cattle and wheat in his own ranch in addition to his four children. The two oldest daughters, Eveanna and Beverly, have already moved out, leaving the youngest Nancy and Kenyon at home. Nancy Clutter was indeed like her father: a class president, “the town darling” (Capote 7),future prom queen, and overall, organized. Contrarily, Kenyon was an awkward fifteen year-old who was entertained by carpentry and machines. Furthermore, Herbert cared for his ailing wife, Bonnie, who spent most of her time in bed, suffering mental disorders. Perry Smith was a small man, though significantly muscular in his brachiums and chest. Nonetheless, he suffered severe pain from his delicate legs. To control the agony, Smith consumed large amounts of aspirin. Though he never made it to fourth grade, Smith had a great understanding of vocabulary and literature. He grew up with severe abandonment caused by his family and was badly abused by nuns and other caregivers. The only thing saving him from the cruel and harmful people was a large yellow bird that occured in his dreams multiple times. Moreover, he was a tranquil and benign man who yearned for affection and acceptance. Yet, Dick was uneducated but delightful, keeping his eyes only on money and women.

The last day people saw Mr. Clutter alive was on November 14, 1959. Dick Hickock and Perry Smith entered the family home on November 15 at 2:00 A.M., only to find that there was no money in a hidden safe based on the information he had obtained from an inmate. The morning after, Nancy Ewalt, refused to walk into the Clutter home after no one had responded to the knock on the door. Her and her father returned from Teacherage to find out their friend, Nancy Clutter, had been shot. Hickock and Smith had slit Herbert’s throat, later shooting him in the head. Upon the police’s arrival, the bodies of Herb, Bonnie, and Kenyon were found, killed by a gunshot held a few inches from their faces. After the robbery didn’t go as planned, put in place by Dick, the pair left the household with $43 in cash.

Individuals within the community felt convinced that somebody native could have potentially been the suspect. Alvin Dewey, a detective from Topeka, spent all of his energy, often at the cost of his family, on solving the murder investigation. As Dewey and the Kansas Bureau Of Investigation looked for clues and theories, the killers, Dick Hickock and Perry Smith had already fled to Mexico, then to multiple areas in southern states. Floyd Wells, a former cellmate of Dick provided a tip to prison authorities, solving the case. Wells told authorities about a conversation he had with Dick about Floyd’s employer, Herbert Clutter. The criminals returned to Kansas from Mexico, to pass terrible checks for money. Upon arrest in Las Vegas with Perry on December 30, 1959, Dick made a confession – blaming the murders on his partner. However, Smith later confessed when he learned Hickock had informed authorities a story he himself had advised to Hickock in self belief during their short time as cellmates. Perry was unable to collect himself after realizing the crimes he had carried out. Dick, however, showed no interest in debating the crime. Smith claimed that Hickock had murdered the two women.

HIckock and Smith were convicted of murder and sent to Death Row within the spring of 1960. The murderers were taken to the Federal Penitentiary in Leavenworth County, Kansas. Along the journey, flashbacks of Perry’s lousy childhood are told again, along with Dick’s childhood. Three execution dates were delayed and when their last appeal was denied, Dick Hickock and Perry Smith were executed on April 14, 1945.

Truman Capote’s different narrative perspectives build suspense in his novel In Cold Blood, to tell the story of the murders of the Clutter family.. The novel is written in third person omniscient, meaning the narrator is all knowing. Though the novel is described in the past tense, it is written in the present tense, to let know the bloodthirsty murders of the family in Holcomb, Kansas. Capote tells the story from two alternating perspectives, through the Clutter family and the murders – Dick Hickock and Perry Smith. Capote’s use of point of view allows the reader to engage in both parts of the non-fiction piece. For instance, Capote describes Nancy Clutter and Jolene Katz with the sentence, “Nancy and her protégée, Jolene Katz, were also satisfied with their morning’s work…” (Capote 24). He then proceeds to the perspective of the killers, “The two young men had little in common…” (Capote 30). Alternating perspectives reveals Capote’s neutrality between the characters. His work is unbiased – stating facts without deviation to let his audience establish their own opinion.

“In March, 1965, after Smith and Hickock had been confined in their Death Row cells almost two thousand days, the Kansas Supreme Court decreed that their lives must end between midnight and 2:00 A.M., Wednesday, April 14, 1945” (Capote 336). Here, Capote’s purpose is to not interfere with the readers’ critical thoughts about the execution. Additionally, using third person omniscient creates a sense of trustworthiness to the novel. This is seen in the way the townspeople of Holcomb admire the Clutter family. In reality, the murderers are influenced by greed as opposed to hatred. In Cold Blood is not written chronologically, rather it makes references to the past for the reader to grasp the plot. In Particular, Capote tells how the Clutter family is killed after the murderers are held in custody. Moreover, Capote retells the childhoods of Dick and Perry as they are on their way to Death Row. “Throughout his life – as a child, poor and meanly treated, as a foot-loose youth, as an imprisoned man – the yellow bird, huge and parrot-faced, had soared across Perry’s dreams…” (Capote 266). Capote’s narrative style builds anticipation between the reader and the novel, making In Cold Blood a fine piece of work.

Truman Capote emphasizes the use of setting by adding to the irony in his novel. The novel, In Cold Blood, occurs in the small town of Holcomb, Kansas in 1959. Holcomb is seen as “the heartland” of America (Capote 3) – peaceful and innocent. As the story progresses, Capote shows that there is no secured place in America. For instance, the community didn’t lock their doors, until the fear of crime came about. The lonesome area is seen as a great place to live. The residents are loving and show trust to one another. Capote spends a great deal of time narrating the village to show the tranquility of Holcomb that is soon demolished by the infringement of nonsense and wickedness on the night the Clutters are killed. “… streets, unnamed, unshaded, unpaved turn from the thickest dust into the direst mud” (Capote 3). Because the town is unprotected, Capote presents this sentence, giving an inkling that something bad will happen.

In addition, Capote shows no form of positivity towards Holcomb, revealing it as a forgotten place. “… this one in flaking gold on a dirty window – Holcomb Bank. The bank closed in 1933…” (Capote 4). Furthermore, the book is set on death row at the Federal Penitentiary. “The Corner” (Capote 249) – the execution chamber- creates a claustrophobic environment. Everyone is put into the same room, awaiting to be hanged. “In a south section of the prison compound there stands a curious little building: a dark two-storied building shaped like a coffin” (Capote 309). Hazard and quandary are shown in this text between Hickock and Smith. The importance of “The Corner” is to symbolize the need to escape for freedom. 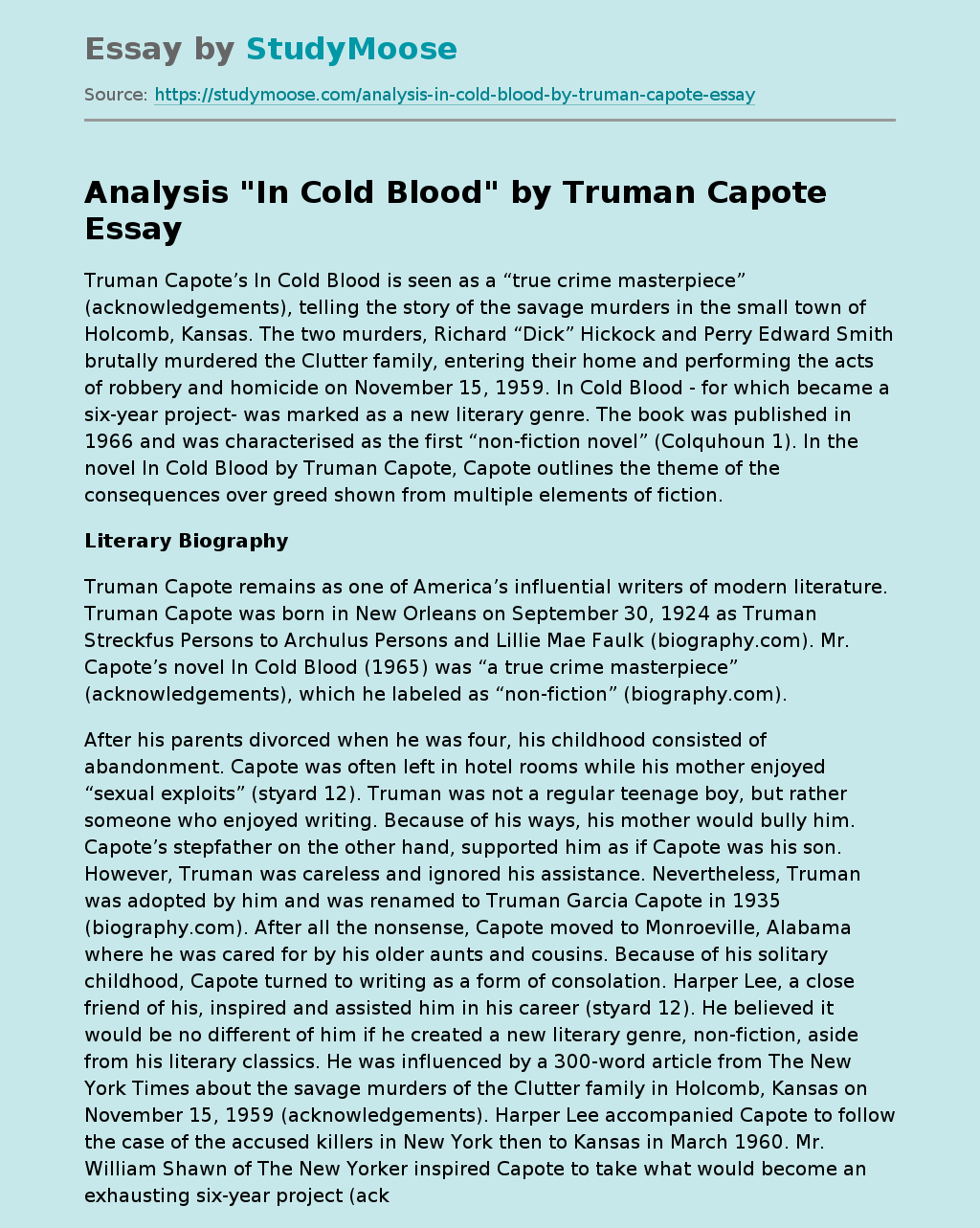