Analysis essay of the film "Falling Down"

The film Falling Down is about a man named Bill that loses control of his anger and frustration when confronted with typical everyday stress. He has reached his breaking point and loses his cool as well as his sense of self. The movie demonstrates examples of both cultural and social issues. Cultural issues explored by this movie are the existence of subcultures and countercultures in city life. The movie takes place in Los Angeles, California that is largely populated by Mexicans and Oriental migrants.

Don't use plagiarized sources.
Get Your Custom Essay on Analysis essay of the film “Falling Down” Just from $13,9/Page

The protagonist, played by Michael Douglas, encounters and oriental man that owns a local mini mart and two Mexican gang members. The oriental man represents the subculture and the gang members represent the counterculture. The social issues are reflected through gender relations, racial relations, and anomie, as well as traffic and violence. This film has great emphasis on the social aspect. The film places these factors in the context of a social setting with cultural influences.

Social stratification plays a minor role in this movie.

The only valid example of it is in the scenes involving the police officers. There is a rank system within the field of police work and the particular ranks are respected. Gender roles play a somewhat larger role within the context of the main character. There is a moderate amount of interaction between the protagonist and his ex-wife. However, the communications between them is brief and tense. The ex-wife fears him because of his uncontrollable temper. Bill, however, speaks to her under the disillusion that they are still a family.

Read Also: Which Would be the Best Topic for an Analytical Essay

Race and ethnicity are important facets of the story line. The first meeting is between the protagonist and the oriental man that owns the local mini mart. After abandoning his car in a traffic jam. Bill goes to the payphone to call his wife. He realizes that he doesn’t have enough change and goes to the mini mart to change a dollar bill. The oriental man tells him he must make a purchase in order to get change. He opts to buy a coca-cola. The oriental man tells him the coke will cost him $0.85. Bill is very disturbed because this will not give him enough change to make the phone call. He feels cheated because a foreigner is overcharging him to buy American goods.

At the end of the scene, he has his first outburst and damages many of the goods and products and then buys the soda at a reasonable price. This scene also illustrates the main characters current social role as a consumer. The next meeting is with the Mexican gang members who threaten him in the name of territory. They look and communicate differently not only because they are Hispanic, but because they have their own internal communication system within the gang members. He uses the wooden bat that he took from the mini mart to physically defend himself against the gang members. The scene contains his second outburst.

The film takes place in a city much like Miami. The mood in the metropolitan city is very busy, fast-paced, defensive, and stressed. The film opens in a scene where the protagonist is “trapped” in his car while stuck in traffic due to road construction. This is very typical of life here in Miami. The issues raised by the film are relative to the Miami lifestyle. Many of us can relate to the frustration we feel when stuck in traffic caused by roadwork during rush hour. We can also relate to the volume of shops and restaurants owned by foreigners and the ever -growing concern with inflation.

This film seems to have been designed to entertain viewers. Nevertheless, it has some key social elements that express to the viewer about the sociology of urban life. This film encourages critical thinking to those who are willing to study this film for its true social value. Unfortunately, most people view this film for entertainment purposes and do not make the time to read into it. It seems that the overall public reaction is that this movie reflects the social nor, and that it will be accepted as such. Within that state of mind, people would see the film as a reflection of modern times and not wonder, “What we can do about it?”

Analysis essay of the film “Falling Down”. (2016, Jun 22). Retrieved from https://studymoose.com/analysis-essay-of-the-film-falling-down-essay 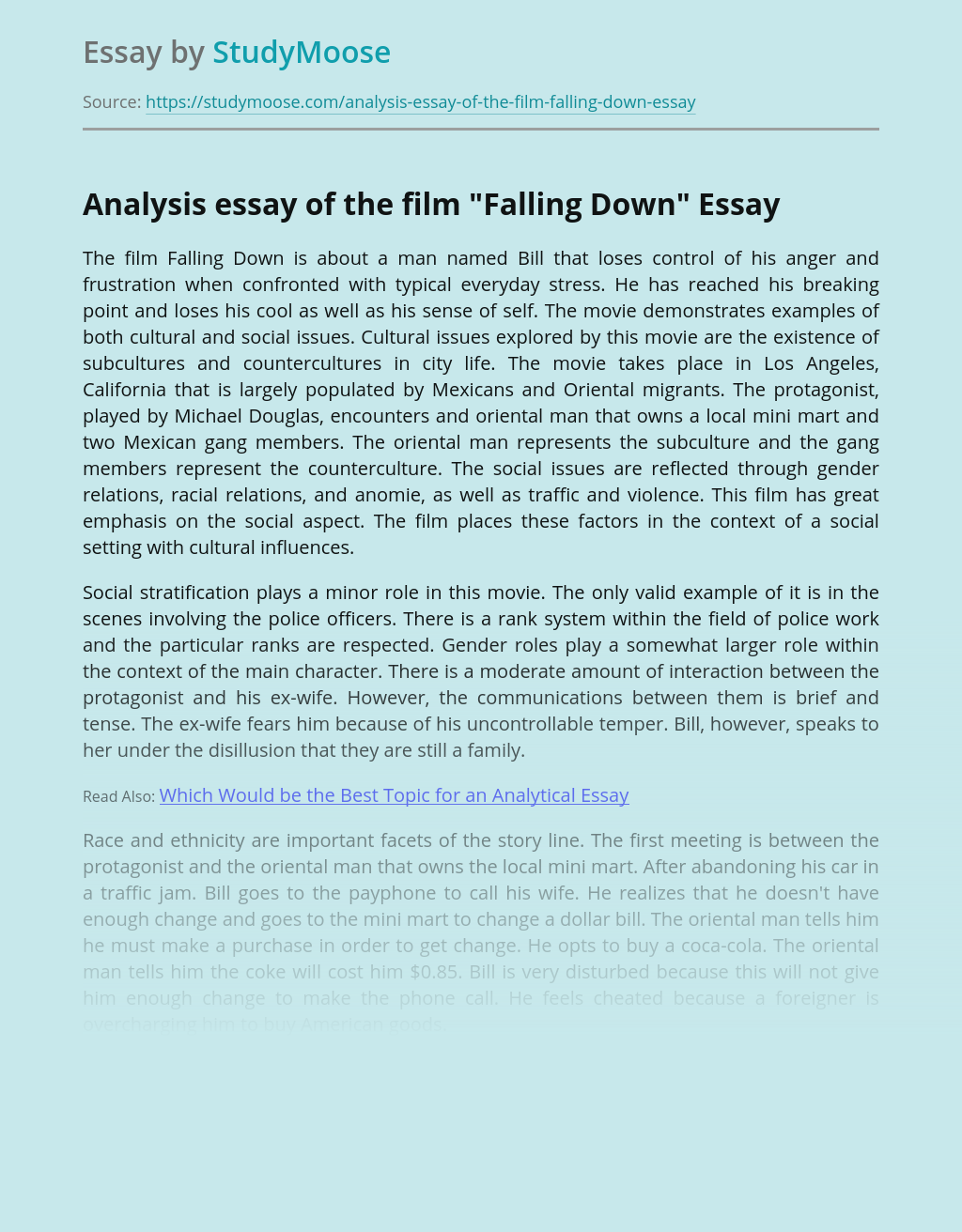 Amongst the many excellent movies of 2013, this one has to be on my top 5 list. Directed with passion by Stephen Frears, Philomena is a movie that concerns your beliefs regardless of which spiritual sect you belong to. As a little exposition, Philomena Lee (Judi Dench), method back 1952, was fertilized out of wedlock...

Get Essay
Why Did I Get Married

The movie was a great comedy and drama. I really enjoyed it even though one of the characters was a little bit over board. Overall it was a great film. This is one of Tyler Perry best film yet. I don’t see too many films where African Americans hold professional jobs. The film portrayed real...

﻿The Effects of Horror Movies on Children

The implicit, and often explicit, intention of horror movies is to scare people. The fright engendered by horror movies can have residual psychological effects for years. Two studies, “Tales from the Screen: Enduring Fright Reactions to Scary Media” and another, funded by the National Institute of Mental Health (NIMH), both concluded that exposure horror movies...