Coriolanus portrays a life ruined through an excess of pride, which was honed by his mother. This pride was the cause of both his rise and downfall. His pride is combined with contempt he has for the commonality, of which even the masses are aware of “he’s a very dog to commonality.” Before leaving to serve his country he calls the people “dissentious rogues” and adds other offensive terms such as ‘scabs’, he makes it no secret that he disapproves of the commonality speaking out.

Don't use plagiarized sources. Get your custom essay on
“ An analysis of Coriolanus’s character and how pride is his main defect ”
Get custom paper
NEW! smart matching with writer

Marcius believes that the commonality were born to be ruled by their peers, he believes they should have no say and thinks they are stupid and ignorant and without being ruled they could not survive. Marcius also accuses them of being ungrateful and are not educated enough to make opinions.

Deserves your hate; and your affections are

A sick mans appetite, who desires most that which would increase his evil”

However, Marcius has many noble qualities.

People are aware of his pride this is contradicted when he accepts a post as second in command for the Volscian war and in this position he is a good soldier and brilliant leader. Marcius accepted this position so that people could see him rise to the top. Marcius wanted none of the plunder but was very annoyed when people tried to get between him and his title of honour. This is very unlike Coriolanus who despises rewards, attention or glory the only thing he enjoys is the honour of war and what it stands for.

The only reward Coriolanus asks for is for the freedom of a poor man helped him once. Coriolanus cannot act the part o glorious, heroic, returned soldier. He cannot help express what he thinks, ” I cannot put on the gown, stand naked and entreat them for wounds sake, to give their suffrage.” Others less noble would have gone through the ceremony for the sake of tradition and said nothing, the source of these good qualities were not only sculpt by his mother but also experience as a great soldier.

Coriolanus is not ashamed to admit that he is a great soldier. Marcius enjoys being hostile towards the common people and at times, when talking about them he gets carried away. As Menenius says “his heart’s in his mouth.” When the reader is first introduced to Marcius, he describes the people as “dissentious rogues”, “curs,” “cowards,” “turncoats” and “slaves.” He also says, “hang ’em”. In those days, to call someone a slave was the worst possible form of abuse, maybe because it was thought of as dishonourable.

Marcius believes that people can not make up their minds about the votes. “With every minute you do change a mind and call him noble that was now your hate.” Marcius also compares the people to inferior races such as animals, “where foxes are geese, you are no surer”. Where the foxes are cunning and sly the people are more like geese. They themselves are not willing to fight; yet they are in want of food. Marcius is too proud to beg yet he wants to be made consul, he makes an outburst and asks for the people’s voices. “Here come more voices, your voices; for your voices I have fought’, at this point Marcius is losing his patience.

Coriolanus was unwilling to show of his scars he gained at war. Cominius has great respect and is feared by many and he didn’t want Coriolanus to pass without his achievement, bravery and courage to be passed without being recognised. So gives Coriolanus his new name for his service in battle. Coriolanus feels as if he has just done a duty and deserves no fame or glory, so tries to dismiss any of the new titles given to him, “I will go wash”.

The people may have such a great dislike for Coriolanus because they maybe feel that Coriolanus is doing nothing for them, and that he is maybe obscure and arrogant. Volumnia is the only one who he submits. This is mentioned by the first citizen, “he did it to please his mother”. He openly worships his mother and is not ashamed of which the people are very aware. It was Volumnia that has sculpted his arrogant nature and taught him the honour of heroism of battle. But no matter how much she tried to change his nature to suit the approach needed in government she did not succeed. Coriolanus has such military prowess that is installed in his nature that he finds it impossible to change this nature which is so successful in battle to the diplomacy that is needed in Government to win over the people and be a successful politician.

When Coriolanus is banished from Rome he speaks as if he were the only person who mattered in Rome, and sole aim is to get revenge on the very society that banished him in to solitary exile “I banish you.” This indicates that Coriolanus believes that he has greater status than anyone does in Rome and will one day get his revenge.

After Coriolanus was banished he wanted to seek revenge against Rome he knew that the only way for that was by joining forces with Coroli’s chief enemy, Aufidius. Menenius who is almost like a father figure to Coriolanus and sees him almost as a stepson is sent to try to persuade Coriolanus not to take revenge and leave quietly, but does not succeed.

Towards the ending Coriolanus is too patriotic to carry out his vengeance against Rome. The instincts of a lifetime pursued by his mother win over his wounded pride. He sacrifices his allies and himself for the sake of his family. Coriolanus has showed great heroism in swallowing his pride and surrendering. However, Aufidius does not agree, he is enraged that Coriolanus is a traitor. From complete hatred to complete trust and friendship Aufidius changed his feelings for Coriolanus. This change of attitude towards him has changed once it’s only a matter of time before it happened again. But after killing Coriolanus he states that Marcius should have a “noble memory”. Although Coriolanus’s and Aufidius’s relationship was short lived, Aufidius still had respect for him and maybe even admired some of his more “noble” qualities.

An analysis of Coriolanus's character and how pride is his main defect. (2020, Jun 01). Retrieved from https://studymoose.com/analysis-coriolanuss-character-pride-main-defect-new-essay 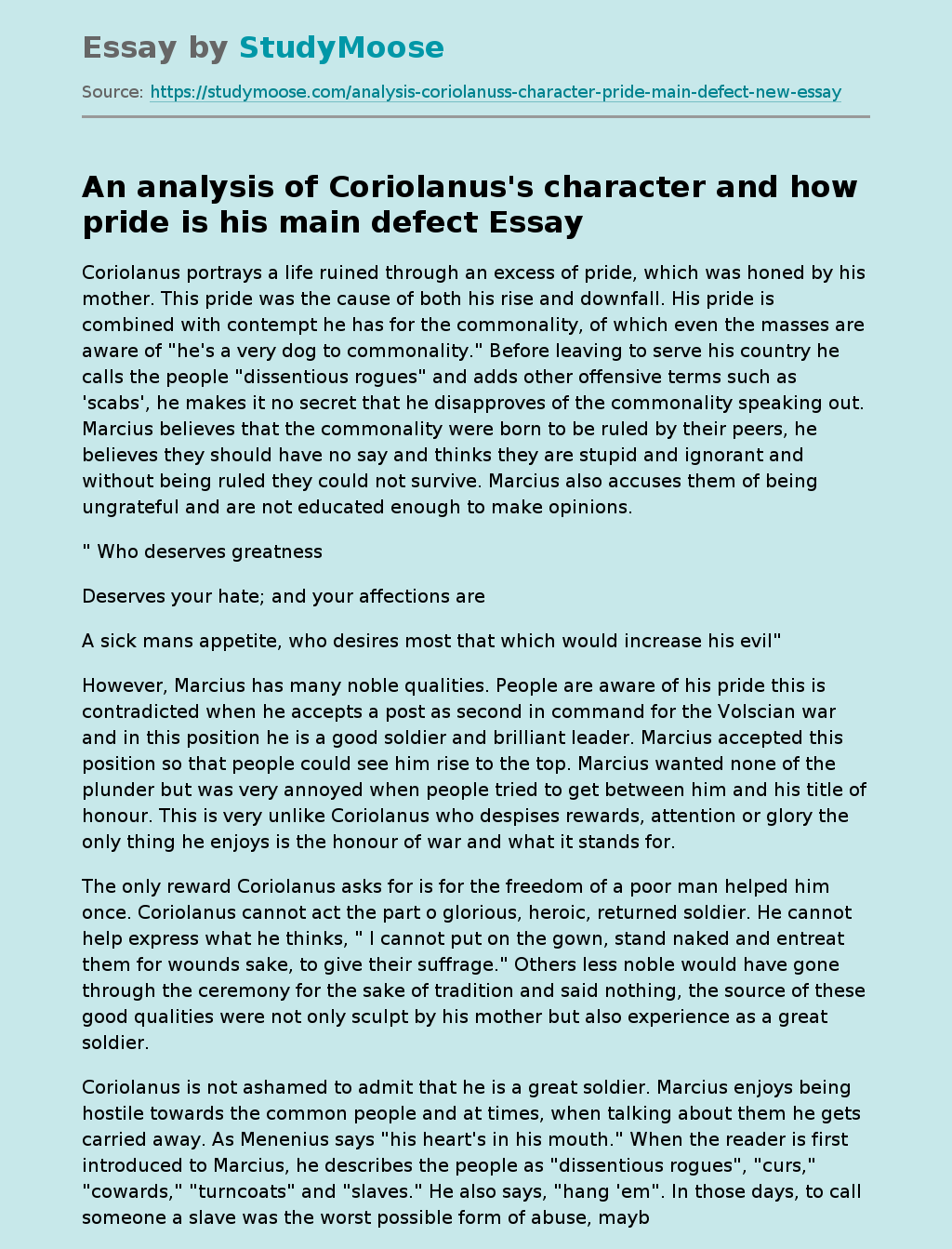