Mistakenly, many people think that American Sign Language is a code system like Morse Code or Braille just with different symbols (Alliance, par 6). American Sign Language is actually a series of hand signs and symbols that are used when communicating with the deaf (NMCDHH, par1). It consists of not only hand gestures but facial features such as eyebrow motion and lip-mouth movements (Nakamura 1). Because deaf people hear with their eyes instead of their ears, it is considered to be rude not to make eye contact while communicating with a deaf person (Basic, par 14).

American Sign Language is used by the Deaf community not only in the United States but in English speaking parts of Canada (Nakamura 1). Until the eighteenth century not a lot was known about American Sign Language (About, par1). An estimated 2,000 deaf people lived in the United States at that time (About, par1). During this time period deaf people were denied human rights (About, Par 2). There are many interesting facts of the history of communicating with deaf people, how to communicate with the deaf, and much advancement for the deaf community.

American Sign Language’s exact beginning is unknown (American, par 3). Charles-Michael Abee de L’epee founded the first school, in France, to achieve public support for the deaf (About, par 1). Students came from all over the country for this (About, par 1). He is famous in France for being the founder for deaf organized education throughout the whole world, he has now built twenty one schools (About, par 1). Also, Laurent Clerc was America’s first deaf teacher (About, par 2).

Him and Thomas Hopkins Gallaudet founded America’s first school for the deaf people, they also, in Hartford, Connecticut, co-founded American School for the Deaf (About, par 2). Lip reading and oralism was declared the appropriate way to communicate, signing became not acceptable in 1880 (About, par 5). In 1965 William Stoke published the dictionary of American Sign Language (About, par 5). Up until the eighteenth century deaf people were not allowed to buy homes, get an education, or sign marriage contracts.

While there are many interesting facts about communicating with the deaf, one of the strangest non-deaf people encounter is that they will tell you where they are going (Basic, par 17). This is considered being polite since deaf people can not hear when a person leaves the room (Basic, par 17). Always make sure to have a deaf person’s attention before trying to communicate or speak (Tips, par 5).

The acceptable way to get a deaf person’s attention is waving a hand or lightly touching their shoulder (Tips, par 5). There should never be physical barriers between people during conversations (Basic, par 15). This is because a person’s face and facial expressions are important when communicating with a deaf person (Basic, par 18). Barriers include covering the mouth with a hand or a long mustache or beard (Tips, par 7). Though it is considered polite for non deaf people to say “excuse me” to walk between people having a conversation rude for deaf people (Basic, par 19). Deaf people consider this as interrupting a conversation (Basic, par 19).

It helps to communicate with deaf people by using body language and pantomime (Communication, par 4). Most deaf people appreciate when hearing people make an attempt to communicate with non deaf people (Communicating, par 5). Also, when saying goodbye to a deaf person make sure to use (SK) for signing off and (GA) for go ahead, and don’t ever end the conversation without making sure the other person is ready to end the conversation (Tips, par 9).

There have been many communication methods developed since the eighteenth century (Basic, par 2). Hearing aides are used for people that have a wide range of hearing loss (Basic, par 16). The TTY is a machine for deaf or hearing people to communicate over the phone with other people who have equipment by typing messages to and from each other, back and forth (Communicating, par 10). This is also known as Relay Services (Communicating, par 10).

Parents are their child’s acquisition of language, a deaf child born to parents that are deaf who know sign language already will begin to learn it naturally just like a hearing child learns its parents spoken language (American, par 1). Also, hearing parents choose to teach their own deaf children sign language (American, par 1). Today’s deaf people can now use cell phones by using the video (University, par 2). They can now watch television and understand what is going on and what they are watching (National, par 1). Also, they can now talk on the phone or use a telephone because of the TeleTYpewriter (Communicating, par 10). 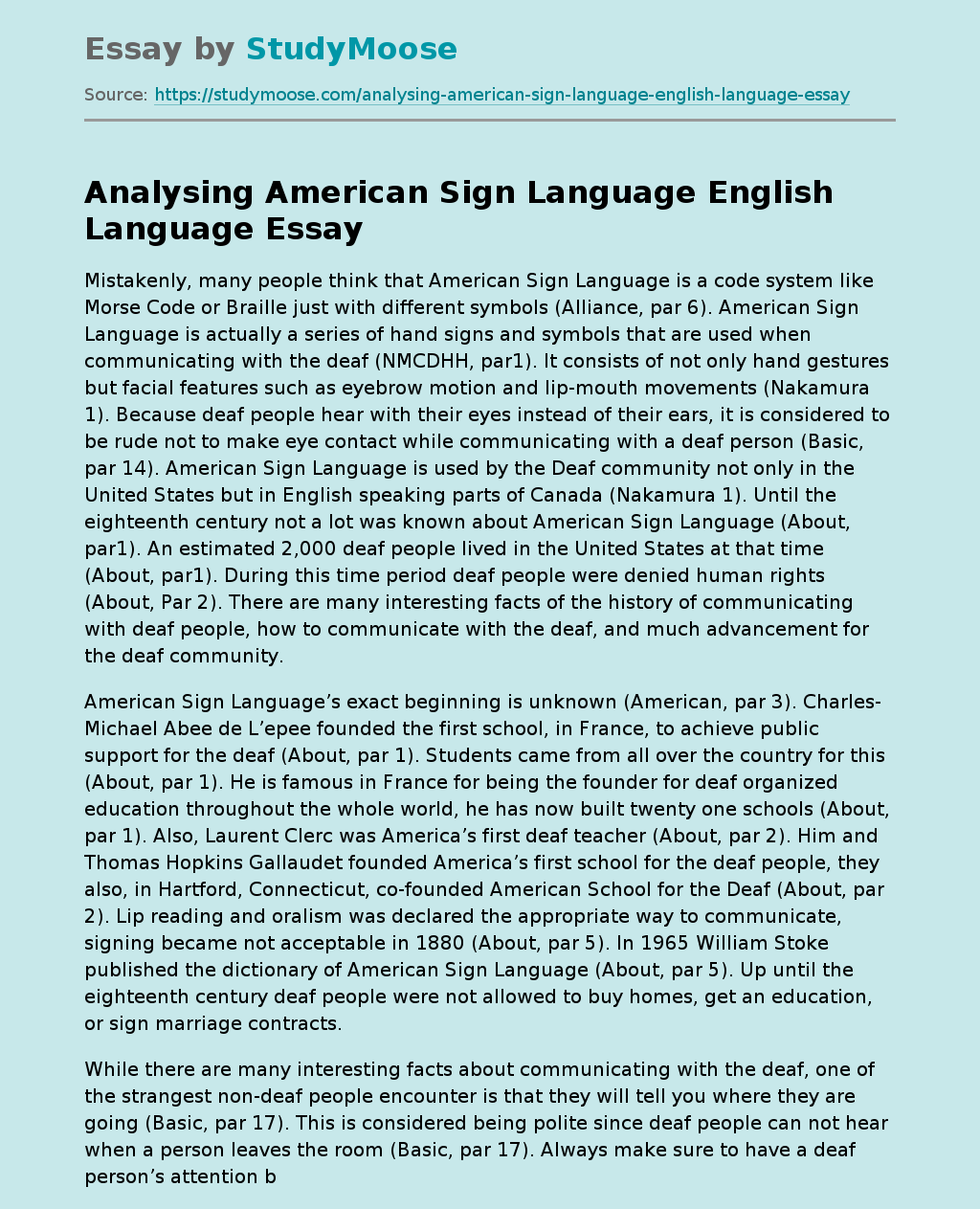