Learning about the stories through Watson’s eyes can cause mis-understandings, for the readers, or benefit them. For example, in ‘The Speckled Band’, Holmes says to Watson, ”Do you see it Watson, do you see it? ”, Watson replies, ”No Holmes I did not”. Insert a phrase explaining what Watson has not seen. Some of the advantages of this method would be it allows the readers to try and solve the mystery themselves, it gives readers an insight into Watson’s feelings and we see Watson’s relationship between him and Sherlock Holmes.

Don't use plagiarized sources. Get your custom essay on
“ Analysation of the detective genre, Sherlock Holmes ”
Get custom paper
NEW! smart matching with writer

In contrast, his views may be biased and we can only see what Watson sees; so it he misses a detail, the readers do also (even though this can heighten suspense throughout the stories). We cannot see Sherlock Holmes views, only Watson’s. The first story I am going to analyse is ‘The Speckled Band’. This story is about a young woman, whose sister strangely died apparently of shock in front of her as she left her room.

The two women lived with their stepfather, who was a strange man that never really got on well with the two women. After hearing strange noises in the room where her sister slept she rushes to Sherlock Holmes for help.

After examining the incident Holmes soon catches the stepfather in action, and it is revealed he trained a snake to sneak into the room and bite the young women. The snake is caused a fright after Holmes hits it with his walking stick, and it returns back to bite the stepfather.

This story is a ‘Locked room’ mystery, as the incident happened inside one room. This causes tension as it is soon revealed no one else could have possibly been inside the room, this confuses readers and make them want to read on to find out what could have possibly happened.

When the young woman is first introduced she is wearing black and is heavily veiled, this tells is she is in mourning. Sherlock Holmes then realises she is shivering, he assumes it is the cold that has caused her to shiver, she then replies with, ” … it is not the cold which makes me shiver… it is fear, Mr. Holmes. It is terror. ”, This causes suspense as we want to know what has possibly made her so scared that she is shivering with fear. Watson then describes her physical state to us, she is described as having a face all drawn and grey, and she is tired with frightened eyes.

A simile is used ‘like those of a hunted animal’; this gives the reader a perfect picture of her distress in our minds. Her physical state tells us she is under stress and may not have slept in days due to fear, this again urges the readers to want to know what has happened to her. Mr Holmes then goes on to point out small but meaningful clues about her which tells him where the lady has been that morning. This tells the readers Holmes is experienced with cases and he already has a series of clues in his head.

We then see that Holmes is becoming aware of the element of danger; he predicts that there will be horrors before the night is over, and tries to convert his mind to a more cheerful matter, ”but we shall have more horrors enough before the night is over: for goodness’ sake let us have a quiet pipe, and turn our minds for a few hours to something more cheerful”. This creates tension as it tells the viewers even Holmes is scared of the approaching danger, which tells us it must be horrifying as after all that Holmes has seen even he is becoming worried.

Later in the story he advises Watson ,”… do not go to sleep; your very life may depend on it. Have your pistol ready in case we should need it. I will sit on the side of the bed and you in that chair. ” This is the sentence that tells us Holmes is prepared and is aware of what is coming. When he tells Watson not to go to sleep, and that his life depends on it, this builds tension as it shows death is in question and whatever is approaching is so dangerous that it may kill you. This frightens the readers and makes them feel worried and scared for Watson, Holmes and Miss Stoner.

Now all the readers can do it sit and wait in suspense, until it is finally revealed what happened to Miss Stoner’s sister. The second story I am going to explore is ‘The Man with the Twisted Lip’. This story is about a woman whose husband has strangely disappeared; the story opens in an opium den. If you’re going to mention the opium den you need to comment on it further. One day as she walks through the back streets of London she looks up at a random window and sees her husband looking down at her.

She rushes up to the room but is turned away by the keeper of the house, before she sees her husband. She then returns with the police but all she can find is the local dirty beggar, known to the police as Hugh Boone. This begger is arrested on suspicion of the murder of the husband. However the wife then receives a letter from her husband which means he is possibly not dead. Holmes works out that the beggar is the husband in disguise, and it is soon revealed he has been living a double life. 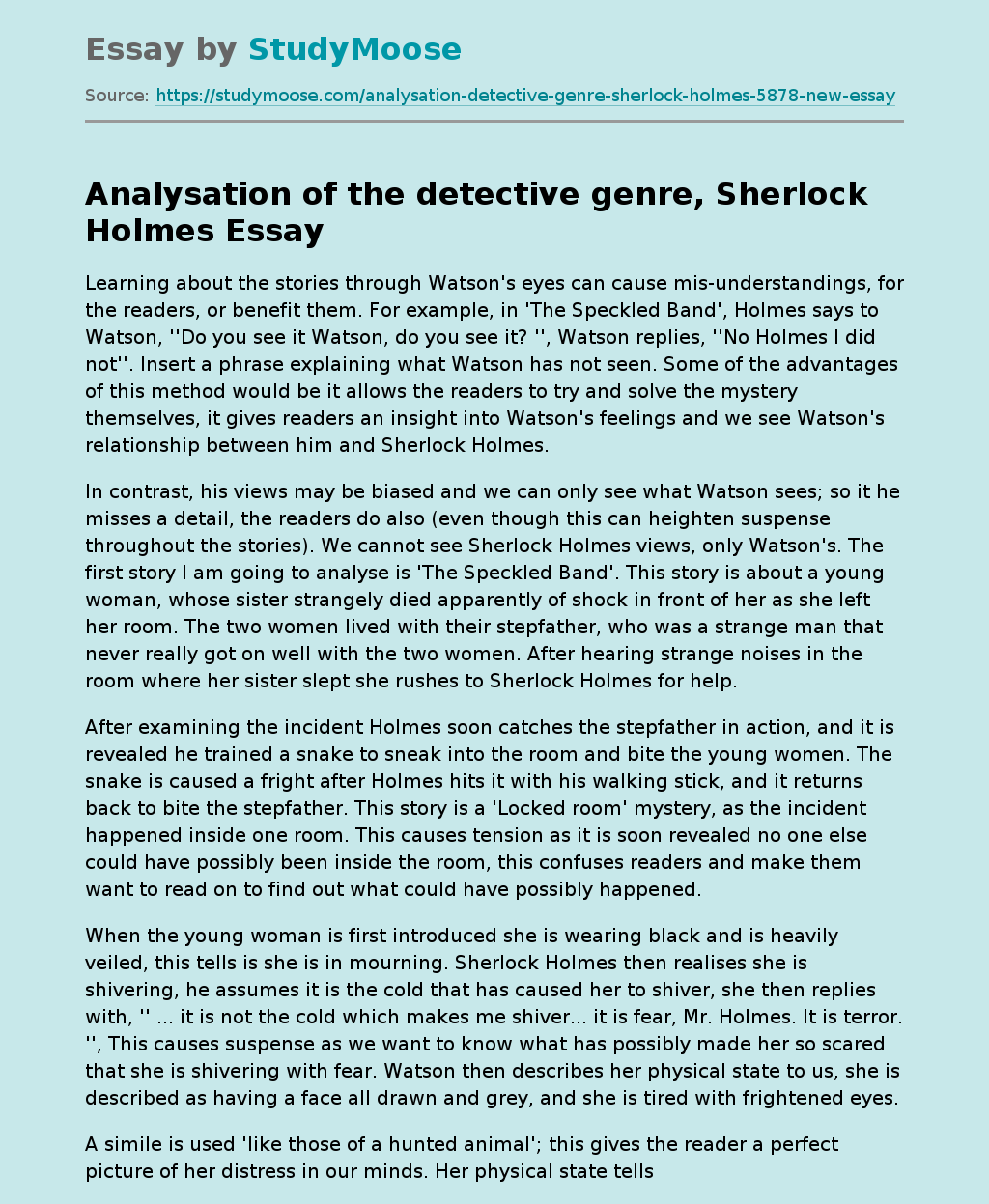