A poem from Wintering out (1972) still early days in the “troubles” Anahorish is a place in south Derry, just a few kilometres south of Heaneys family farm. In gaelic it translates roughly to “hill of spring water”

Don't use plagiarized sources.
Get Your Custom Essay on Anahorish Brief Poetic Analysis Just from $13,9/Page

The second verse begins with a darker approach, “and darkened cobbles
In the bed of the lane.” this suggests that Anahorish also had some of Heanys first “bad” memorys, possibly a young heaneys first glance at the troubles? Anahorish, soft gradient
Of consonant, vowel-meadow
This is simply describing the actual word, “Anahorish” soft gradient a refrence to hills, and vowel-meadow, a description of the high amount of vowels in the word, and another nature refrence.

Those mound dwellers
Go waist-deep in mist
To break the light ice at wells and dunghills.
Mist and ice are both forms of water, and so in heanys world, inspiration, however as the liquid and gas form, this represents inspiration which cannot be found, even though it is there. “to break the ice at wells and dunghills” means that you have to put effort in breaking the ice to reach the water underneath it, and so suggesting that you have to work, or search for inspiration. 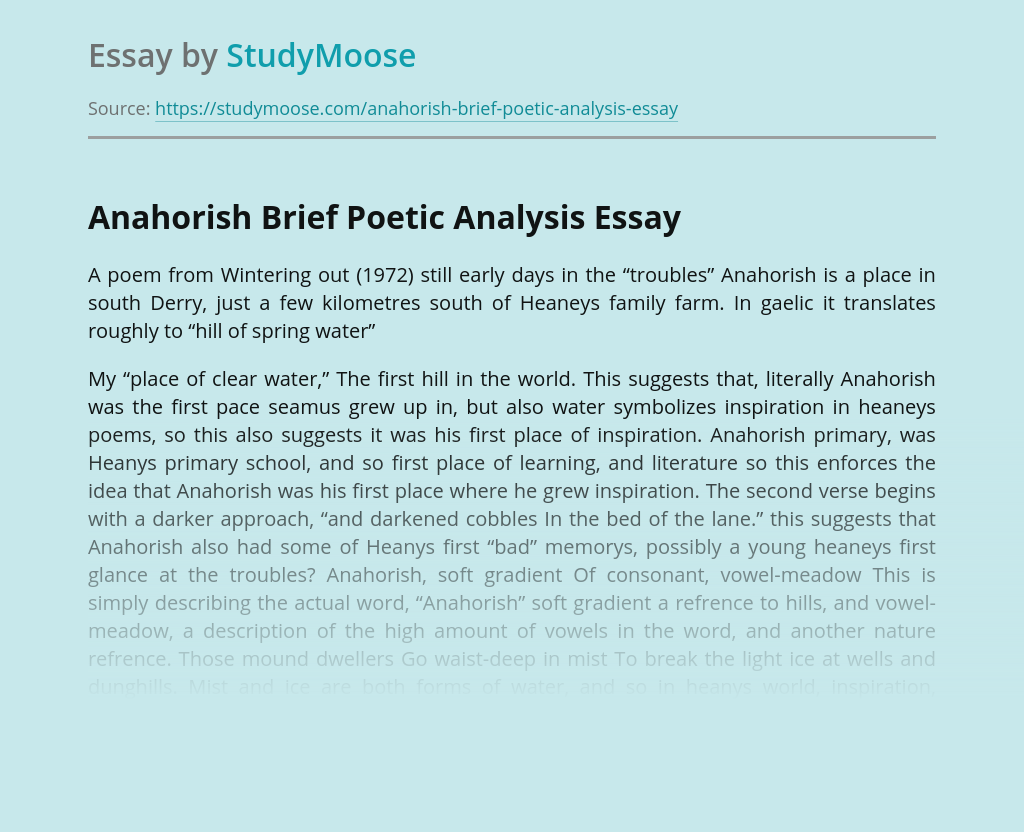 “Mezzo Cammin” is an insightful poem by Henry Wadsworth Longfellow. It was a poem that was written halfway through Longfellow’s life and titled as such. It follows the life of a middle aged man who is basically whining about all the things he missed out on in the past. This title comes from the first...

View sample
The key themes of "Romeo and Juliet"

“Romeo and Juliet” is the tragic tale of forbidden love, fate and destiny. The prologue is important as it introduces these key themes and creates dramatic irony. It is introduced by a chorus – to give us a commentary and summary of the action. The dramatic irony whets the audience’s appetite for the play, and...

Dylan Thomas wrote this poem for his passing away daddy, it was released on December 16, 1952, in addition to six other poems in” In Country Sleep “. The Poem is a villanelle. It is comprised of five tercets, a system of 3 lines of verse, followed by a quatrain, an unit of 4 lines...

“La Belle Dame sans Merci” is a poem written by John Keats who was a romantic poet. The first three stanzas of this poem are spoken by the narrator who is talking to the poet, asking him why he’s wondering by himself and looks so sad. He addresses the poet as “wretched Wight” roaming outside,...

This essay intends to examine the poem “The Send Off” by Wilfred Owen. Owen wrote this poem while he was stationed at Ripon army camp. He was based there after being a patient at the Craiglockhart War Hospital, this is where he met Robert Graves and Siegfried Sassoon. Owen was at Ripon between March and...