Anaconda: Biggest Snake in the World

a. A scientist of Brazil was sailing a boat in the Amazon River. His goal was to find the biggest snake in the world, the anaconda. Some tragedies occurred in this river due to the deadly matatoro, Spanish for “bull killer”. As he was cruising, an elongated, green figure appeared on the surface of the water. An anaconda. The scientist was so fascinated by this beautiful but deadly reptile, he crept closer to get a better look at it.

Don't use plagiarized sources. Get your custom essay on
“ Anaconda: Biggest Snake in the World ”
Get custom paper
NEW! smart matching with writer

Then, snap! The snake bit his head, then wrapping its body around the scientist, suffocating him to death. Dinnertime! b. Slowly, the anaconda consumed the whole body, crushing the bones to the stomach. c. I will speak of several things about the aggressive anaconda including its

d. As the largest snake in the world, an average-sized anaconda can be 30 feet long and 550 pounds. Imagine five 10-year-olds lying down head to foot to match this extraordinary length.

Also, to match its weight, it would take approximately eleven kids. Anacondas can be big around as a grown man. e. It can open its mouth wide enough to swallow its prey whole. This is because the anaconda’s jaws are held together with stretchy ligaments. f. The anaconda’s eyes and nostrils are positioned on the top of its head, allowing it to see and breathe while the rest of the body is submerged under water. g. The colorings of its scales create an excellent coat of camouflage of spots and stripes along its body.

Its scale colors vary from greenish to orange.

h. These creatures live in slow-moving rivers, swamps, and nearby pools of the Amazon Rainforest. i. Anacondas are also located in the Guianas and throughout the regions of the tropical South America and the Orinoco Basins as well. j. They are also found in savannas, grasslands, and deciduous forests. When not in the water, they are usually spotted by its edge, shading itself from the sun. k. The waters are their main source for transportation, hunting, and escaping from dangers.

l. Anacondas eat amphibious animals, like frogs & toads, as well as fish, caiman, birds, ducks, turtles, mice, hamsters, rats, deer, and pigs. m. They are nocturnal, which means they hunt at night. But they don’t go search for food, instead they expect for their prey to come to the water for a drink. n. It takes several weeks for an anaconda to digest one meal. o. Each day, they can eat up to 40 pounds.

p. So the next time someone gives you a big bear hug, think of your reptile buddies, the anacondas.

Anaconda: Biggest Snake in the World. (2017, Feb 13). Retrieved from https://studymoose.com/anaconda-biggest-snake-in-the-world-essay 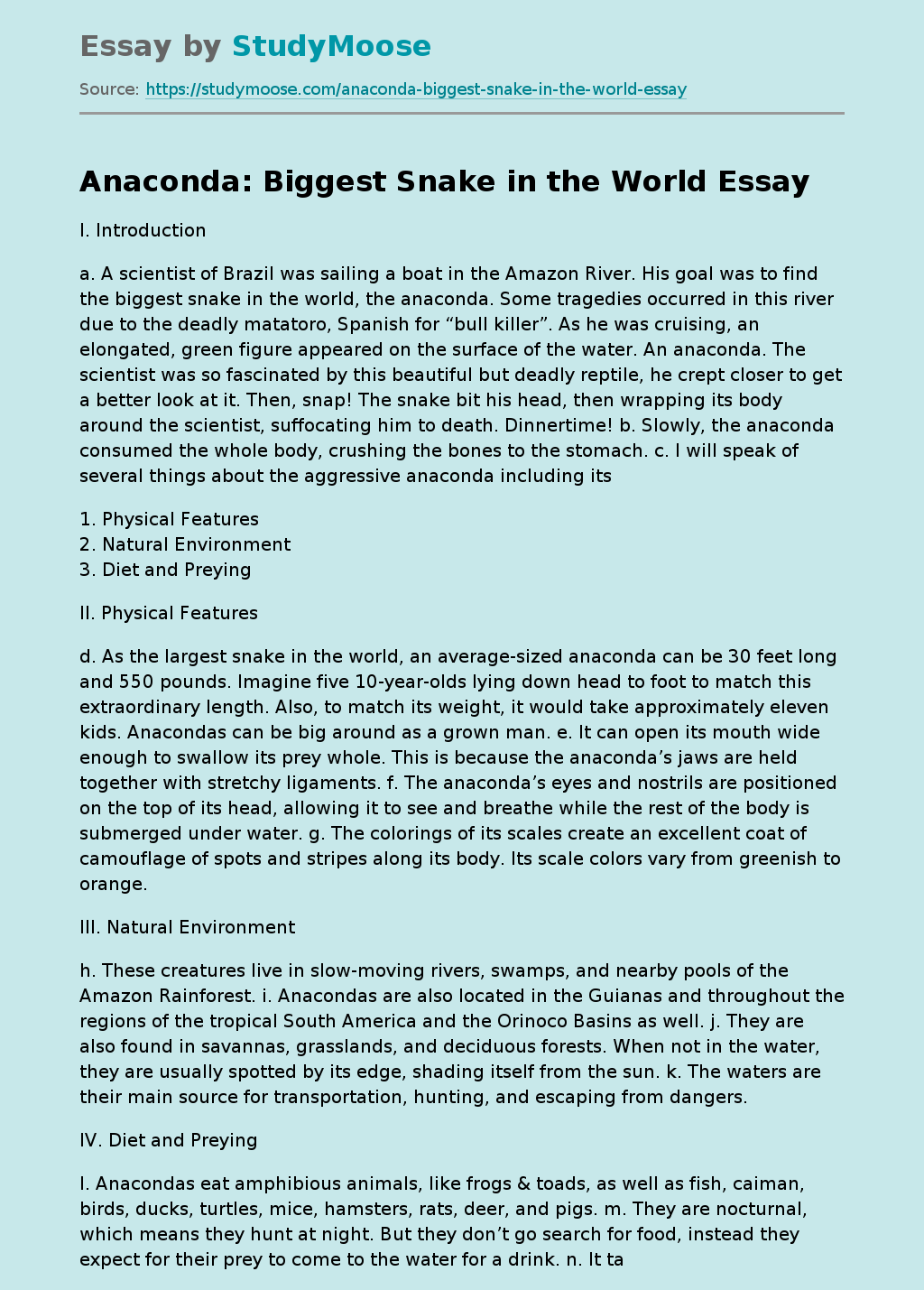