An Irregular Warfare Strategy for Somalia

The use of Irregular Warfare has been ongoing for years around the world. Irregular warfare is described as a violent struggle among state and non-state actors for legitimacy and influence over the relevant populations. I will discuss where the U.S. may apply military force in conjunction with other means of national power to stabilize the nation of Somalia. I will also discuss why it would be considered as an Irregular Warfare environment.

Somalia gained its independence from British control in 1960, where the British relinquished control and gave Somalia to the United Nations.

Don't use plagiarized sources. Get your custom essay on
“ An Irregular Warfare Strategy for Somalia ”
Get custom paper
NEW! smart matching with writer

Somalia was governed by civilians until 1969; after which the military rebellion by General Muhammed Siad Barre took place. General Muhammed Siad Barre was a military tyranny that was in command of Somalia and it’s military. His tyranny lasted over 2 decades. During the 1970s the United States government communicated with General Barre and donated over 100 million dollars to help stabilize the Somali economy. The United States knew it was within there best interest to keep General Barre in power of Somalia for a while.

The United States also knew that by the late 1980s the Somali economy would be unable to sustain itself and foreign aid would be withdrawn. After the collapse of Somalia’s economy, the United States revolted against General Barre’s oppressive regime. Different warlords of Somalia fought together against General Barre, ending his power and forcing him to flee the country.

The United States maintained the tyranny by supporting General Barre and his dictatorship because they had an agenda.

They then used their power of the situation to overthrow General Barre in the end. In 1991 The United Somali Congress (USC) was formed and a temporary president was appointed to govern the nation. With dissention within the USC they were later over thrown by the Islamic Courts Union. The Islamic Courts Union had the support of the people because they offered services such as schools and health care. They also took on the responsibility of law enforcement which was paid for by local businesses to lower and maintain the crime rate within the area. The Islamic Courts Union took on the responsibility of halting robberies and drug dealing, as well as stopping the showing of what it claims to be pornographic films in local movie houses.

The Islamic Courts Union also addressed problems throughout the region by establishing community services and security which in turn help them to gain the trust of the local residents. Local warlords became concerned over the growing power of the Islamic Courts Union. The Warlords decided to join together to create the Alliance for the Restoration of Peace and Counter Terrorism (ARPCT. The Islamic Courts Union lost their power over Mogadishu in 2006, when they were defeated and forced to Kismayo, which is in the southern part of the country. Conflicts within the nation of Somalia were sometimes planned as a means to an end.

Whereby the United States Government supported a certain regime before they used their power to gain control of the situation and overthrow the tyrant. In other cases the use of national power was used such as the Islamic Courts Union to gain control over Somalia by implementing logical line of operations by providing the people their needs and services to gain their trust. In these situations it would be considered as an irregular warfare environment, because they were violent struggles for power within the nation.

The use of power can cause conflict within nations and among nations; however, being able to manage conflict can bring about some form of peace within and with nations. This essay discussed some examples of Irregular Warfare and how it played a part in Somalia. It also discussed some examples of Irregular Warfare that was used throughout the history of the Somalia conflict.

An Irregular Warfare Strategy for Somalia. (2016, Aug 17). Retrieved from https://studymoose.com/an-irregular-warfare-strategy-for-somalia-essay 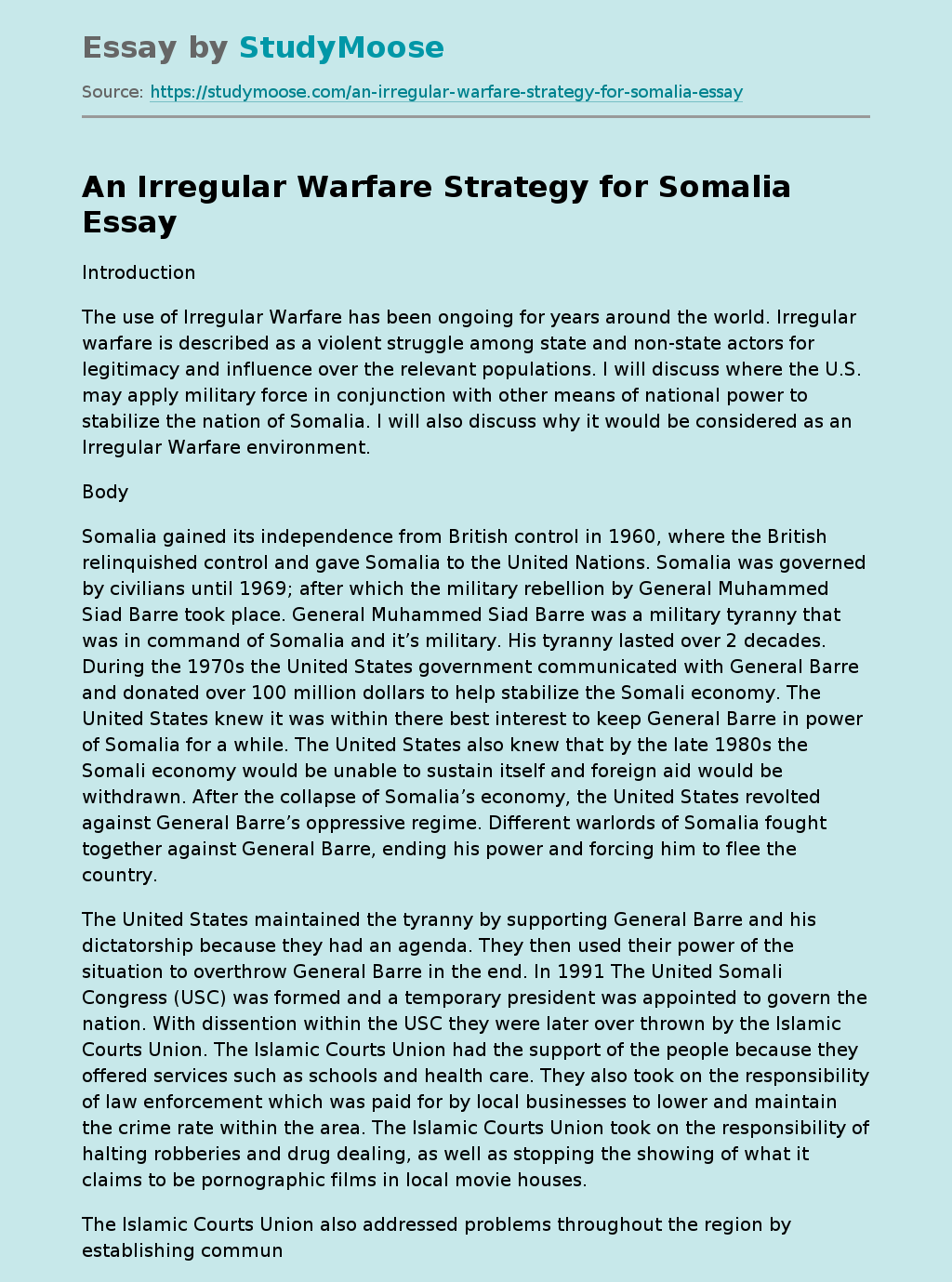