An Introduction to Qualitative Analysis

Don't use plagiarized sources.
Get Your Custom Essay on An Introduction to Qualitative Analysis Just from $13,9/Page

State the identity of your unknown (along with its sample number). Give the reasoning you used to arrive at this conclusion.

The Group 2 elements are Mg, Ca, Sr, and Ba. To identify an unknown containing two or more cations of Group 2 elements, first add CrO4 into the solution. Then we could identify them with their colour. Next we add C2O4, if the ppt is formed,

In this lab, we carry out precipitation test of four cations and four anions, and use the observations to identify two unknowns. First we mix Mg2+, Ca2+, Sr2+, Ba2+ with K2CrO4, and observed that Sr2+ and Ba2+ forms a ppt. Then when we mix (NH4)2C2O4 instead of K2CrO4, we observed that all of the cations forms a ppt except for Mg2+. Next, we did the same thing by using Na2SO4 and NaOH instead of (NH4)2C2O4 . Lastly, we examined unknown B and found that it has the same chemical properties with Ca2+. So we conclude that the unknown substance should be Ca2+. In part II, we mix CO32-, SO42-, Cl-, and I- with HNO3 to each of the test tube and notice no ppt formed.

Secondly, we mix Ba(NO3)2 instead of HNO3 with the anions, and we observed that CO32- and SO42- forms a ppt. Then we add HNO3 to the ones that formed ppt, and the ppt disappeared. Next, we mix AgNO3 instead of Ba(NO3)2 with the anions, and observed ppt formed with all of the anions except for SO42-. After that, we added HNO3 and NH3 separately to the anions and we observed no change in SO42-, but the precipitates that formed in CO32-, Cl-, and I- disappeared. And there is a ppt formed when NH3 is added to SO42-, and the other ones’ precipitates turns to a lighter ppt. By using these observations, we found out the unknown ion contains the same chemical properties as SO42-.

An Introduction to Qualitative Analysis. (2016, Mar 25). Retrieved from https://studymoose.com/an-introduction-to-qualitative-analysis-essay 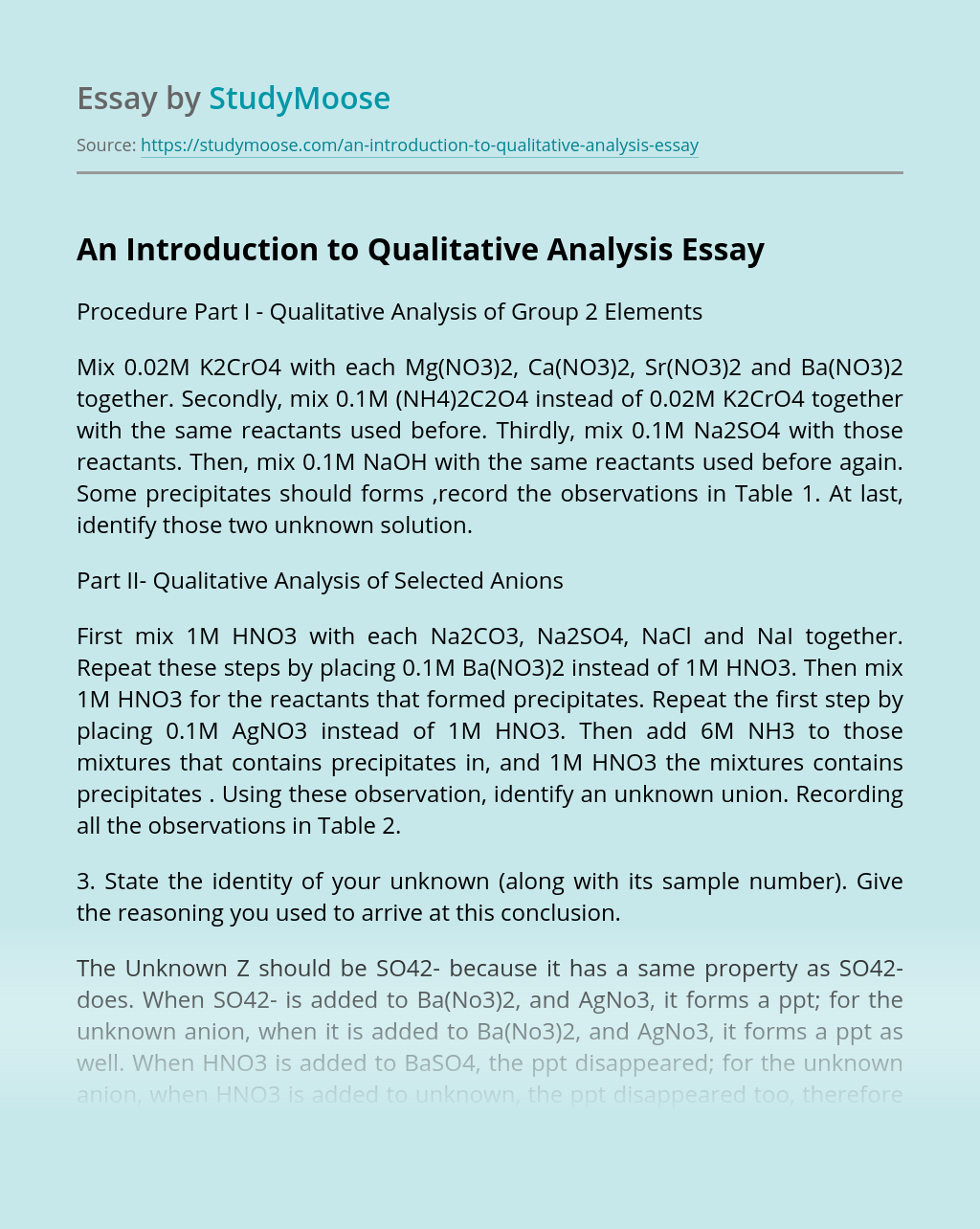 Rate this post When water is heated limescale deposits can form, especially in machines such as fully automatic coffee makers, espresso machines and all hot water units. In this context you often hear about hard and soft water. The hardness of the water indicates the proportion of limescale. Your water supply company will provide more...

Get Essay
Scientific Investigation of the Peroxidase Enzyme & Temperature

Rate this post Abstract In this lab we tested the effect temperature has on the rate of enzyme activity. The way we figured this out was by taking four different temperatures and testing the different absorbance levels they produced every 20 seconds for two minutes straight using a spectrophotometer. The important part of this experiment...

Rate this post 1.0 Introduction In line with Levitt (1960), Marketing Myopia refers to the narrow view of myopia, marketing and business environment. This kind of advertising program without any demand with clients but an organization will is to sell goods or services within particular economic markets. It tilted a business to focus on its...