Comparison Between Chinese and Foreign Humor

An intercultural comparison between Chinese and foreign humor

Humor is a wonderful work of human civilization and wisdom, she smiled as a bridge, bond people in different culture, and made people recognizing the power of the humor in their normal communication.

Don't use plagiarized sources. Get your custom essay on
“ Comparison Between Chinese and Foreign Humor ”
Get custom paper
NEW! smart matching with writer

This paper will trace the historical origins of humor. From the humorous discourse features, themes, social functions, performance practices and seize of the subtle to start the similarities and differences between Chinese and Western humor.

Humor is a wonderful work of human civilization and wisdom, she smiled as a bridge, bond people in different culture, and made people recognizing the power of the humor in their normal communication.

Origins and scopes of humor

Humor comes from the Latin word ‘humor’, it is an ancient Greek physiology term refers to the ‘fluid’. Greek physician Hippocrates believed that the human health and temperament of different types of four kinds of body fluids on the mixing ratio. Temperament theory in ancient Greece, medieval and Renaissance have a great impact.

Thus, humor is the original meaning of four kinds of body fluids determined by the proportion of the human mind, body, customary tendency, temperament, or temporary mental and emotions. The first of the humor into the field of aesthetics is a famous British dramatist, Ben Jones, gradually dilute the meaning of humor physiology, aesthetics increasingly in-depth the study of humor. Late in the 17th century, humor began to have the modern meaning; In the 18th century, humor for the aesthetic features of drama, fiction, poetry, prose and writing style with humor for the writers and artists have been common.

Such as in : Sunday school teacher: Hands up all those who want to go to heaven? Hands up …… What about ou Terry? You haven’t got your hand up-don’t you want to go to heaven? Terry: Sorry, I can’t. Mum told me to go straight home. The suspense in the beginning of the first discourse, two, third and fourth inningdirect rendering. The little boy’s ‘Sorry, I can’t. ’ is a reversal, the last one is a hilarious mutations. Cultural context is an abstract, general concept, an abstraction form in people’s everyday social life.

Because discourse is a communicative form, while the communication is carried out in certain situations, therefore, discourse analysis must consider its contents, participants in communicative activities, speech, media and other factors. In addition, there is also a certain discourse of environmental factors, such as ‘context’, Marlinowski called it ‘Situational context’. Halliday thinks, from the language point of view the use of situational context the most important three factors are: language field, the tone and manner.

Language field is corrected in the event of things; tone is who is communicative, their basic conditions, characteristics, status roles, role relationships between participants; manner refers to the language in the role of communication, including communication channels and modified way. From the above humorous point of view, the language field is the scene ask questions in class; communication of both the teachers and students; both in communication is the unequal status of the teacher is the speaker, students aresubject to speaker. Student’s response should be to ‘support’ or ‘fight against’.

The confrontation is the beginning of reversal, which produce humor. Communicative role of the conversion from the point of view, discourse is the speaker and the recipient as a center of rotation.

Humor is mankind’s an aesthetic pursuit, is a reflection of real life, first in its themes and content reflect the unique customs of the ethnic, social and cultural. By traditional Chinese Confucianism deeply rooted that people talk about sex pale, therefore, traditional Eastern humor neutral topic is taboo.

The humor in the West accounted for a large proportion of these topics.

Classified according to their social function of humor as: negative humor(Deny the shortcomings of life and negative phenomena), positive humor(Affirm the advantages in life and positive phenomenon) and pure humor(Does not contain affirm and negative, just full of fun to everyday phenomena of reflection). Europe and the United States purely for entertainment humor in a significant proportion of the pure humor, this is the time when humor from the bud will form adistinctive feature.

The Chinese sense of humor seems to bear a heavier historical mission – skewer the current ills. Throughout hundreds of popular since the traditional dialogue segment, the vast majority of satire piece.

National characteristics of humor in artistic expression on the subject matter as far as clarity. It is often rooted in long-standing cultural traditions of a nation and psychological quality, the performance is very subtle, delicate. China has always been deliberately seeking humor in the end, the taste of the progressive layers.

Most indicative of the Chinese culture of humor in the form of humor than the comic. Crosstalk of the four aspects of the structure corresponding to the four parts of humor. Comic from start to finish with multiple suspenses, so that the audience is always with interest, from the tension eased to meet expectations, and then across to the new expectations and new meet. The European and American humor often only one piece of suspense, comedy to be more suspense, but because of the integrity of comedy, the plot of coherence nd requirements, restrictions on the use of a lot of suspense. Crosstalk is not, although it has some plot lines, but not sticking to the plot needs the opportunity to abandon the use of suspense. On the contrary, sometimes to the medium of suspense, clever plot jumps from one to another with no associated plot.

Subtle sense of humor is the world’s nations  common feature. Each nation’s sense of humor by their historical and cultural tradition, in the long-term artistic practice in the form of subtle style, extent and methods vary.

From the perspective of contemporary humor writing, in the subtle nature of the pursuit, China and Western countries along two different directions. Overall, the humor works of Western-oriented and strive to concise of implicit, philosophy combine to make more room for humor after taste. The Chinese contemporary humor, its ability to master the subtle and bright scales.

Western countries, China’s humor and humor in their culture, nurtured by the soil to form a different style. Through this cross-cultural comparison, our team has a better understanding of world culture, to accelerate the pace of China into the world.

Comparison Between Chinese and Foreign Humor. (2018, Nov 03). Retrieved from http://studymoose.com/an-intercultural-comparison-between-chinese-essay 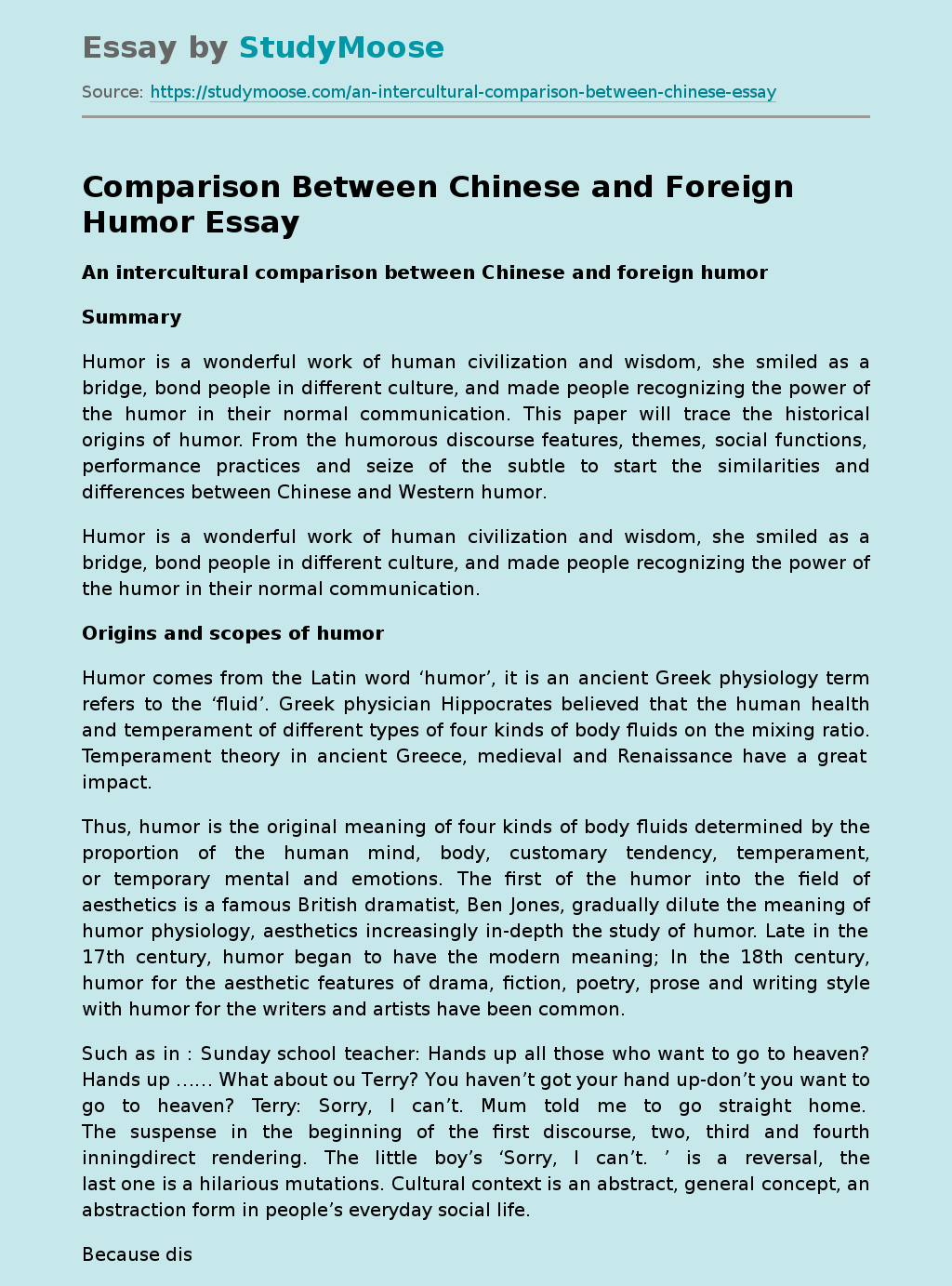