Arthur Birling is a self-centred man intent on climbing the class ladder, even at the expense of his family and employees. He regularly uses his obsessive behaviour over status to invoke popularity or power within a particular crowd, which is evident in the very first scenes of the play when Birling says to Gerald: ‘It’s exactly the same port your father gets from him’, suggesting Mr Birling bought it in order to imitate a more prominent societal figure as well as to gain a rapport with Croft.

Don't use plagiarized sources. Get your custom essay on
“ An Inspector Calls- How Priestly Presents Arthur Birling ”
Get custom paper
NEW! smart matching with writer

Similarly, Birling tries this technique with the Inspector, however this time to gain leverage over him by asking if he sees much of ‘Chief Constable, Colonel Roberts’, following up his threat with a disclosure of his superiority; “He’s an old friend of mine…I see him fairly. We play golf together…”.

This was intended to make the Inspector feel belittled and impressed by Birling’s relationship with the Chief Constable, however Priestly makes this decidedly lost on the Inspector, because as a symbol of socialism, he wouldn’t care.

Proficient in: Books And Reading

One thing Priestly in particular was grateful for after the World Wars was the newfound merging of classes, reflected her in An Inspector Calls by the Inspector’s indifference towards Birling’s titles and wealth. It shows that Birling, regardless of how much money he has or who he knows, is still being investigated for neglecting his social responsibilities. This ultimately shows Socialism as uncorrupted when juxtaposed against the 1912 society where the belief was that if you were rich enough, you weren’t guilty of anything, which is why Birling is outraged by the Inspector’s visit; “…we’re respectable citizens and not criminals!”

Despite the possibility that Mr Birling perhaps had an uneasy upbringing, occasionally indicated by his faux pars, which his wife readily berates him for (‘(reproachfully) Arthur, you’re not supposed to say such things-‘), Priestly leaves no room for the audience to sympathise with Birling because in doing so, Capitalism would be accommodated for.

To remedy this, Birling is presented as a fool to the modern and 1945 audience by describing the Titanic as ‘…unsinkable, absolutely unsinkable.’ As well as wrongly predicting that there wouldn’t be war. As a result, the audiences, likely emotionally affected by these events, would be angered at Mr Birling’s stupidity, making him instantly unlikeable.

Coincidentally, J.B Priestly transforms the illusion of grand Capitalism to one of supreme naivety at Birling’s failure to see past his own self-importance. This sides the audience with what seems to be the only other option that they won’t condemn themselves to this 1912 attitude; Socialism. In essence, Priestly shows that Birling and people like him are a negative part of society because of their refusal to hold any responsibility for anyone other than themselves; “I can’t accept responsibility”. This in turn steers the audience away from Capitalism by using Mr Birling’s selfishness as a warning to us all: If we don’t accept the responsibility we owe to other people, then no matter who we are, or which walk of life we come from, we will be as foolish as Mr Birling. 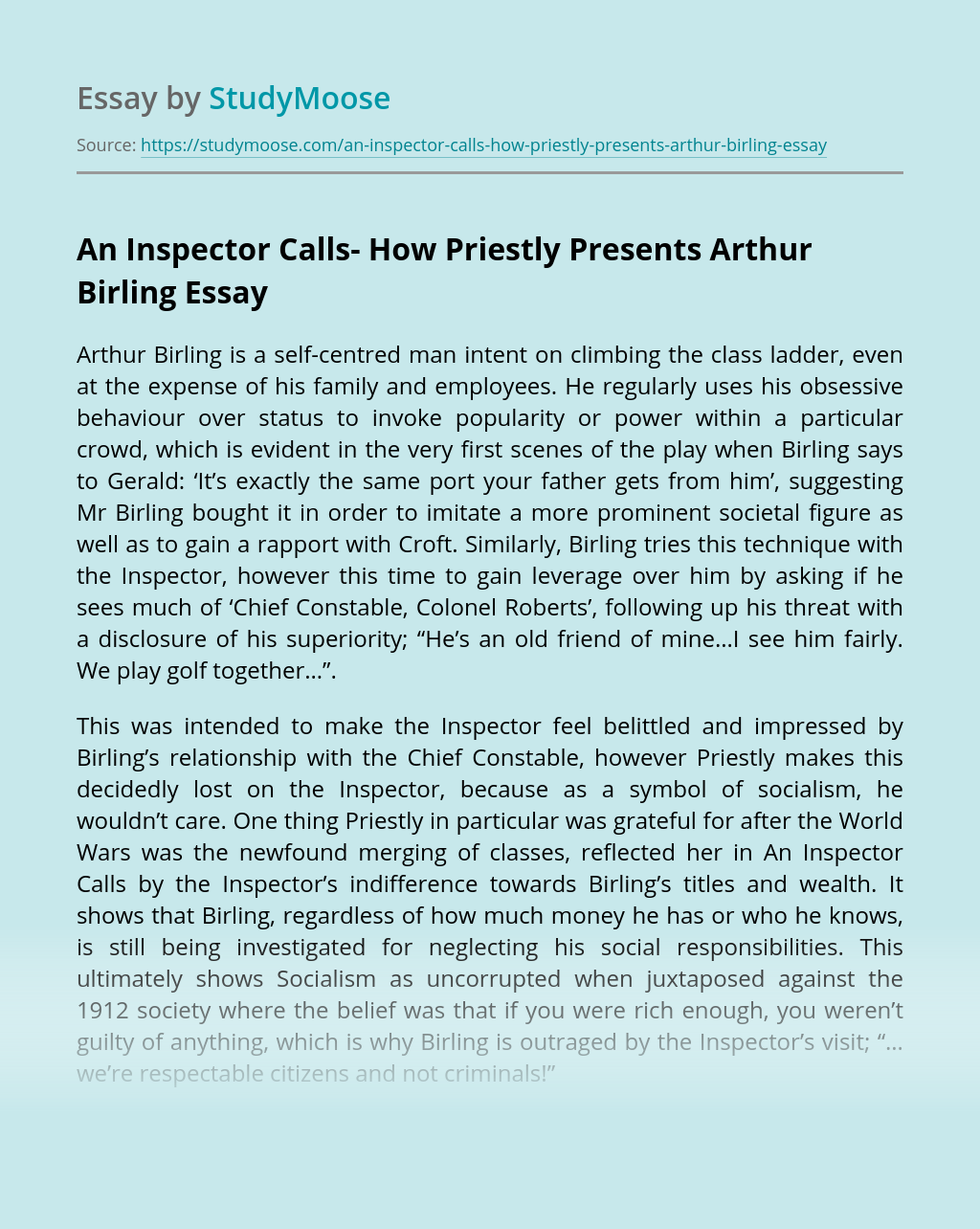