Part 1 Questions
1. The Europeans poured have poured something into the water which sterilized the water and killed the toxins that become disruptive in the digestive system when they are consumed. They Europeans may have poured what are called oral rehydration salts into the well, which quickly works are combatting the cholera, and will prevent further outbreaks from occurring.

2. Ethical issues that are raised by pouring the treatment into the wells without the consent of others is that people should be entitled to choose whether or not they want to chance their lives by consuming a mystery cure.

The villagers have no idea what is being poured into the wells, which further down the line could cause different health issues, and in turn people won’t know where to begin to find a cure if they are unsure of what caused it. Bottom line, it takes away the person’s right to choose whether or not they want to accept the “cure”.

For instance flu vaccines are readily available, but people still choose not to receive one out of fear that it will enhance the likelihood of having the flu that season. The only factor that makes it more ethical is the fact that it worked and nobody else became sick, but that should make people more skeptical knowing that their drinking water is 100 percent accessible and easy to tamper with.

3. The Europeans were not justified in imposing their cure on the villagers. Yes the “cure” may have worked in Europe, but since it had only happened one time, they may not know if their “cure” was really what helped in their situation.

It could have been something completely different that went unaccounted for. They definitely could have taken other steps beforehand that would have made it more acceptable, such as: informing the people of what they were doing and asking for permission. The elder had every right to drain the well out of fear that the Europeans could have been tampering with it and making the situation worse.

4. It is not appropriate to force a cure on a population. It takes away peoples’ choice. As long as people are educated about the situation and their options, they should be able to choose. Like with the Fluoride situation, the water in the area is not their only source of drinking water, families could very easily buy bottled water in order to prevent ingesting what they fear to be tampered with water.

5. It is clear that whatever the Europeans poured into the well did help the villagers. Since they isolated the drinking water to only one well, and people stayed away from the dyed water it helped to prove their validity much more, since the people did in fact get better after a few days and no new cases had occurred. The results were not scientifically reliable since there is still an amount of doubt since there was only one other trial. I would say the results are more indicative than anything since there was really nothing formal about the process.

1. I would say the villagers would needs to drink from the water repeatedly in order to speed up the production of the bacteriophages killing the harmful bacteria. The basis of my answer is that if a villager already displayed the symptoms of cholera and only drank the water once that it would be ineffective. The symptoms of cholera include vomiting and diarrhea which means the newly ingested water with the cure would quickly be expelled from the body.

2. People could see improvement as quickly as a day. They may not be back to 100 percent, but the symptoms will slowly start to go away. It all depends on how many phages are consumed and their rate of production. Very quickly they can multiply. I would expect the effectiveness to increase over time in an individual and then by the time they are better, the bacteriophages will have no more cholera bacteria to feed off of and then the phages will slowly die off because they rely solely on bacteria in order to survive.

3. Yes the process of viral and bacterial co-evolution will continue indefinitely because both will continue to grow, modify, and adapt to changes that the other has made.

4. No the villagers should not be concerned that this virus will cause damage to their intestines because that is solely what cholera targets, and the purpose of the phages are to combat the cholera bacteria, which would in turn help their intestines.

5. The release of a toxin from the cholera bacteria is what causes people to experience the dreadful symptoms. A negative health concern of killing the cholera at a quick rate is that since the phages will prevent symptoms from increasingly becoming worse, the “dead” cholera in the intestine may sit there for a longer amount of time instead of running straight through the person which may do more damage to the intestine.

7. If the bacteria became lysogenic, people would see improvements much faster, because more phages are being produced to combat the cholera bacteria.

8. Eventually the bacteriophages will die in the intestine since there will be no more bacteria to combat and live off of.

9. A risk to phage therapy is that the virus and bacteria both evolve over time. Using this method more frequently may cause the virus’s to evolve more quickly. If that is to happen there will be new problems to solve.

10. The next bacterium that is infected will actually produce more cholera and make the symptoms occur even more quickly. The affected human will become even sicker and could possibly die.

11. Given this information I would still try the phage therapy. The symptoms would be awful, and I would be willing to try anything for a chance for the symptoms to get better. I would say this is a safe and effective form of treatment under monitoring.

1. The phage treatment had much quicker and effective results than the antibiotics.

2. Factors of the human body that could alter the effectiveness of the phage treatment would be temperature, acidity, and the strength of the immune system. These factors could have different effects on the phages. The results would be different for each person, since the internal environment is different from person to person given the situation.

3. Advantages to antibiotics are that they still work, just not at the fastest rate. You know exactly what is being put into your body and how it is supposed to work.

4. Advantages to phages is that they work at a faster rate than antibiotics, they invade the cell and get right to work whereas the bacteria often has time to adapt and keep reproducing with an antibiotic.

2. Yes there are some diseases that lend themselves more to phage therapy such as salmonella and other types of food poisoning that target specific areas of the body. And yes there are some infections that lend themselves more to antibiotic therapy like a simple cold, or an ear infection. Antibiotics are more than capable of handling something simple like that. It is when infections become more serious and detrimental to a persons’ health that other methods of treatment should be discovered.

3. Yes I think restrictions on phage therapy should be loosened. It may cost more, but there are people willing to pay the price for more effective treatments. As long as the phage therapy is being used for the greater good, then I say why not take advantage of it. 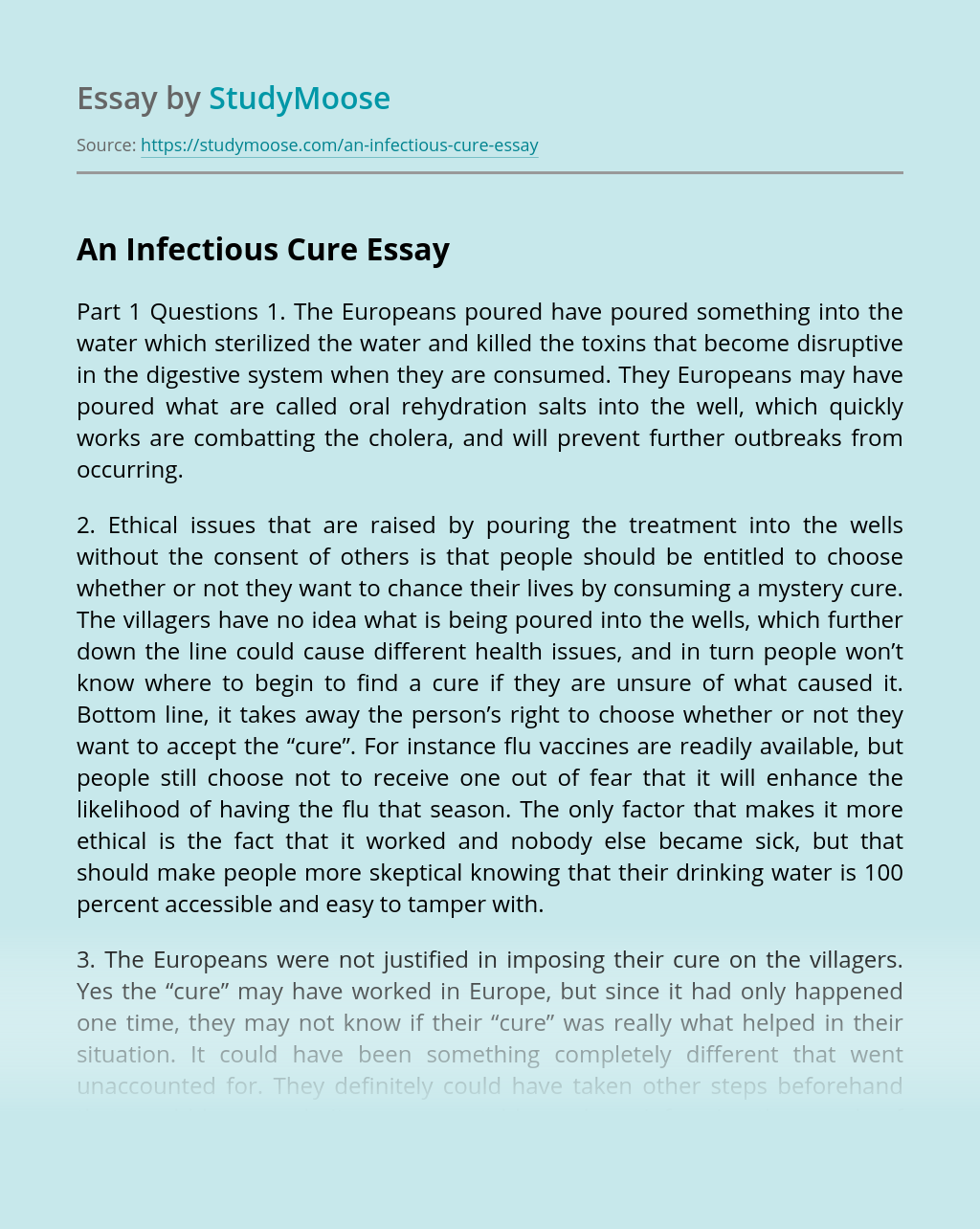