Mohandas Gandhi, the father of non-violent resistance in the modern age, believes the world should stand up for what is right in a peaceful way; leading to the creation of his philosophy discouraging revenge—“an eye for an eye will make the whole world go blind. ” He tries to simply convey that vengeance will eventually spiral out of control and wipe out everybody because revenge does not terminate a conflict, rather, instigates further brutality amongst more people, leaving the “whole world…blind.

Don't use plagiarized sources. Get your custom essay on
“ An Eye for an Eye Will Make the Whole World Go Blind ”
Get custom paper
NEW! smart matching with writer

Gandhi’s theory has influenced many people, most notably, Martin Luther King, Jr. , to respond to controversial matters passively. However, the theory of the world becoming “blind” due to revenge is flawed, regarding justice. The metaphor implies that retribution as means of justice is fundamentally catastrophic. Humans should do what is right no matter what to create a world where plotting for revenge does not exist; like in the Bible, “Be compassionate as your Father is compassionate.

Do not judge and you will not be judged.

” (Luke 6:36-38) Using punishment as a way of dealing with things is seen as the opposite of the solution. For instance, Osama Bin Laden and his followers, known as terrorists, have used violence to solve his belief of oppression on Muslims by the U. S foreign policy which concluded in thousands of deaths in the 9-11 attacks which included his own followers and his death in 2011.

The terrorists who followed Bin Laden, blinded by hatred and misleading beliefs from Bin Laden, went as far as self-sacrifice as an attempt to make change instead of trying to reason with words and nonviolent actions; something Gandhi wanted to accomplish.

Although Gandhi may not have influenced everyone, he did accomplish spreading his theory of nonviolence to Martin Luther King, Jr. , another successful rights activist that permanently changed the way the world viewed segregation, who stated, “Nonviolence is the answer to the crucial political and moral questions of our time.

Gandhi’s essence of his argument is morally correct; however, this expression questions the ability for a person to obtain justice. This saying assumes all humans are guilty and justice is harmful. Justice means to treat people how they deserve, in as much as the people have the authority to do so. “Whoever strikes a man a mortal blow must be put to death. ” (Exodus 21:15. ) “An eye for an eye” or the “tit-for-tat” system is necessary in a just and equal society.

For example, a criminal who kills could either get the death penalty or life in jail without parole. The criminal has lost the maximum amount of rights as possible, just like the victim. On a smaller scale, a robber would get fined or a year in prison to compensate for the violation against the person robbed. Therefore, “an eye for an eye” means proportionate justice. This system does not “make the whole world go blind,” assuming all humans are innocent and the fact of the possibility of all humans becoming criminals and murderers is slim.

An Eye for an Eye Will Make the Whole World Go Blind. (2017, Jan 20). Retrieved from https://studymoose.com/an-eye-for-an-eye-will-make-the-whole-world-go-blind-essay 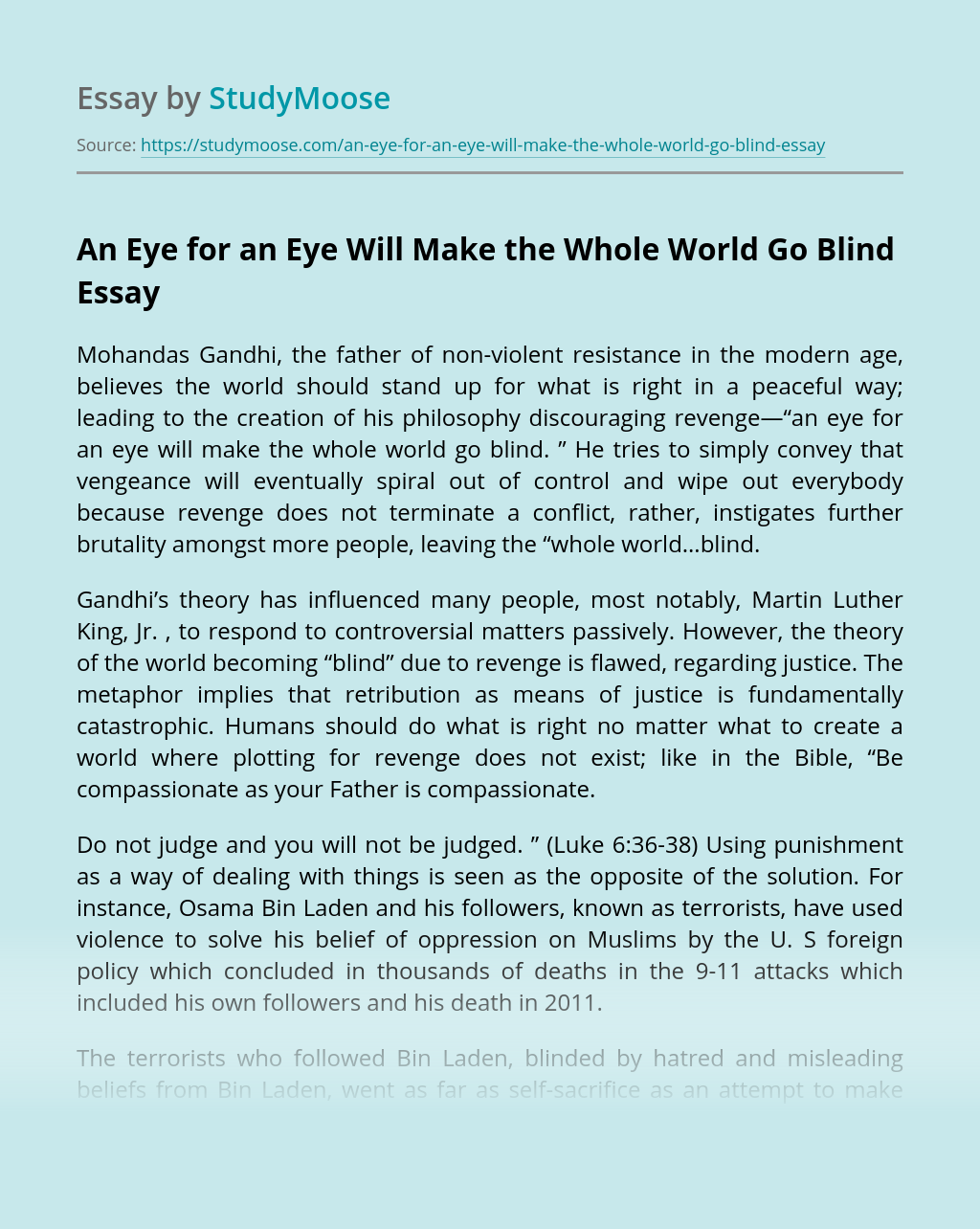