Mark Twain’s classic novel, The Adventures of Huckleberry Finn is strewn with controversy over whether or not the nature of the story is ironic or racist. The progression of the characters, namely Huck, suggests that growth and awareness on the issue of race are gained, however the end of the novel betrays all of this new understanding as Huck reverts back to a “helpless accomplice” as Tom Sawyer enters the picture (Marx 1469).

What does that say about the book as a whole and of Twain? Is this a progressive story wrought with satirical points that are meant to shake a finger at narrow minded readers, or is it a story in favor of nineteenth century ideology? Is there a middle ground that can accommodate both perspectives? In this essay, Twain’s uncomfortable ending to The Adventures of Huckleberry Finn will be examined through different perspectives that may shed light on this issue from an unbiased standpoint.

Don't use plagiarized sources. Get your custom essay on
“ An Examination of the Ending of Mark Twain’s Novel The Adventures of Huckleberry Finn ”
Get custom paper
NEW! smart matching with writer

Many scholars believe that Huckleberry Finn is a progressive story painstakingly designed to subtly mock racism and the white ideology of the nineteenth century.

Twain uses language and aphorisms strategically such as, “…here was it all come to nothing, everything all busted up and ruined, because they could have the heart to serve Jim such a trick as that, and make him a slave again all his life, and amongst strangers, too, for forty dirty dollars.” that suggests that his desired affect was shame (Twain 1417).

This is the highest point of enlightenment that Huck reaches in the novel and, from the perspective of satire, the perfect place to end it.

If it had ended there, it would have been moral fiber, bringing Twain’s desire for change to the forefront. However, the story continues and the character that grew so much suddenly reverts back to the person he was before his journey with Jim. In this excerpt from Leo Marx’s essay on the controversy in Huckleberry Finn, he describes why he thinks the ending is a failure; “The most obvious thing wrong with the ending, then, is the flimsy contrivance by which Clemens frees Jim.” (1468). All of the characters seem to shift in nature, even Miss Watson as it is discovered that she freed Jim two months prior to the end of the journey.

Can the story still be seen as a satirical device with an ending that exposes the racist nature of its characters? There are many moments in the novel that suggest Twain had a racist nature. The countless uses of the n-word and the startling expressions revealing the supposed disposable nature of African Americans such as, “Good gracious! anybody hurt?’ ‘No’m. Killed a nigger.”” make it difficult to view the author as anything but backward (Twain 1422). Jane Smiley reflects on some of these points in this excerpt from her essay “Second Thoughts on Mark Twain’s ‘Masterpiece'”; “As with all bad endings, the problem really lies at the beginning, and at the beginning of The Adventures of Huckleberry Finn neither Huck nor Twain takes Jim’s desire for freedom at all seriously;” (1475). The obvious methods of escape that would have ensured Jim’s freedom are conveniently ignored by Twain as he sets the stage for his idyllic raft ride down the Mississippi River. Is this harmless or suggestive of his desire for amusement, even at the expense of human life?

The ending of the novel does not contradict this perspective as all of Huck’s character development is lost when Tom Sawyer steps in and, knowingly, prolongs Jim’s imprisonment. When asked why Tom wanted to free Jim if he was already free, Tom replies, “Why, I wanted the adventure of it;” (Twain 1462). While some may see this as an attempt to make Tom look bad, it is equally reasonable to view this as evidence of Twain’s cruel and sadistic nature. Finally, the middle ground and the attainment of an unbiased perspective. What if the and learns from them but regresses when called upon to be more mature than he is capable of being. While it is more appealing to view the protagonist as the good guy who makes all the right decisions and does not sacrifice other character’s wellbeing, how realistic is that? Especially in this story because Huck is a child and childhood is driven by influence and mistakes. To ask of Huck the responsibilities and values that most adults of the time couldn’t even grasp is a fantastic concept. Regression is a part of growth and to hold Twain accountable for telling the real story seems unfair.

It is impossible to tell exactly what Twain set out to accomplish with The Adventures of Huckleberry Finn; assuming of course that the technology for time travel is still undiscovered. Evidence for any perspective can be exposed but it is the necessity for finality and closure that drives people to uncover an explanation. An ending that contradicts the growth that precedes it isn’t satisfying; but that is reality. Understandably people are up in arms with Mark Twain, but no amount of prying will ever convince Huck to put an end to Tom’s foolish game. Now that the failures of Huck Finn have been picked apart, maybe it is time to move past it and fix the injustices occurring right now.

An Examination of the Ending of Mark Twain's Novel The Adventures of Huckleberry Finn. (2021, Sep 14). Retrieved from https://studymoose.com/an-examination-of-the-ending-of-mark-twain-s-novel-the-adventures-of-huckleberry-finn-essay 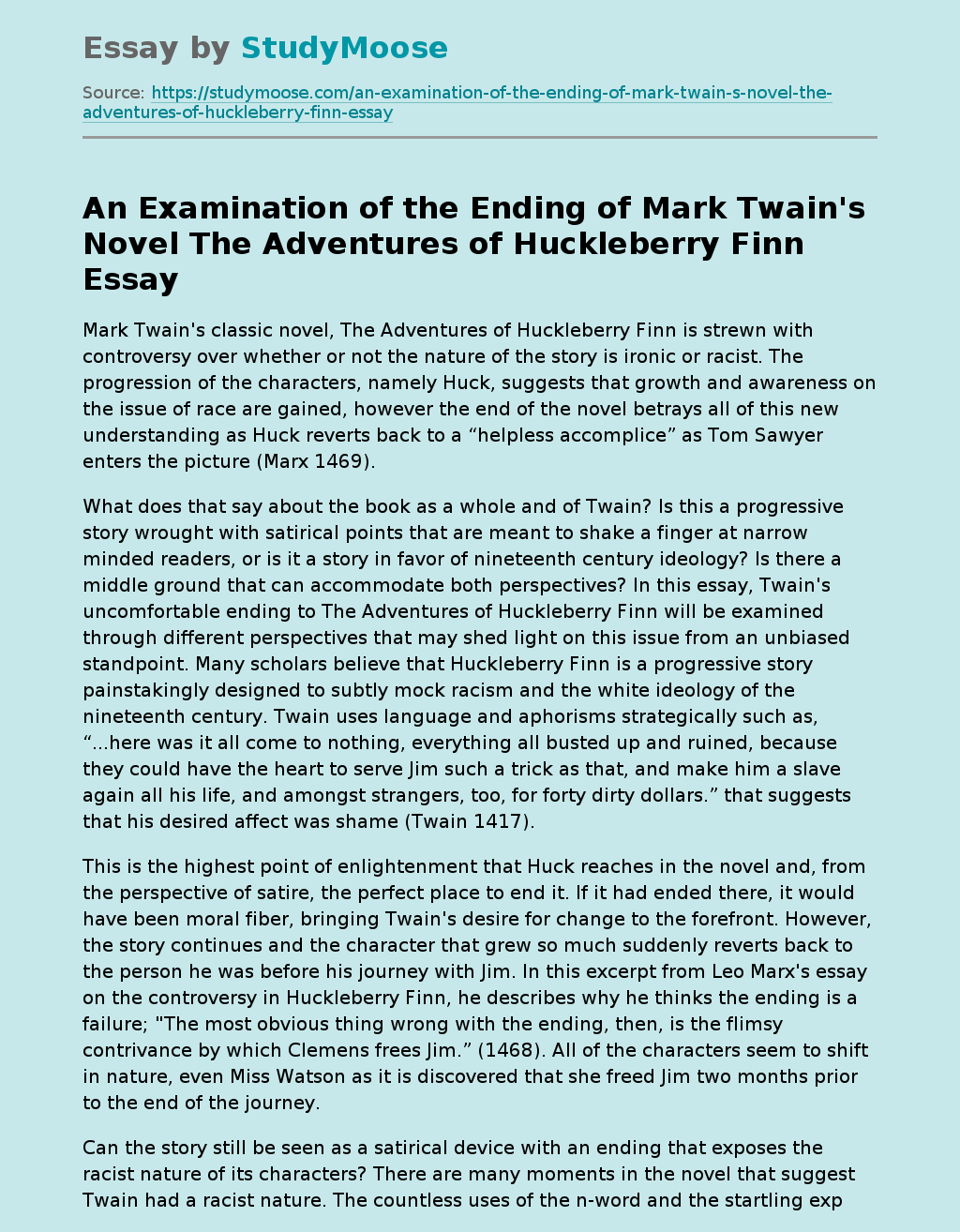