An abortion is most typically defined as a premature termination of fetus from the uterus. In scientific terms, “An abortion is a procedure to end a pregnancy. It uses medicine or surgery to remove the embryo or fetus and placenta from the uterus. The procedure is done by a licensed physician or someone acting under the supervision of a licensed physician” (Medline Plus). Upsides to this operation is helping women who are unable to care for a child or were raped continue their lives without an unwanted child, it should be a women’s right to be able to decide what happens to her body and her pregnancy.

Don't use plagiarized sources. Get your custom essay on
“ An Argument in Favor of Abortion Because Women Deserve the Right to Have a Choice ”
Get custom paper
NEW! smart matching with writer

Personal downsides may include post-traumatic stress, guilt and embarrassment from others. Morality, separation of church and state, and dangers of legal abortions are a few main arguments dividing the world on this subject. Abortion shouldn’t necessarily be a go-to but it should definitely be an option. A lot of thinking and decision making goes into this choice, it is not an act of whim as most pro-life supporters may argue.

This procedure will always be a part of our society, whether anyone agrees or disagrees or even whether it is legal or not. By comparing the positive and negative sides of abortion, we can see that continuing to keep abortion a legal operation is the best decision because women deserve the rights to have a choice in this life changing event. Many people who are against abortion have chosen that side for religious and moral reasons.

They believe that the fetus is a living person and an abortion is considered to be murder in their opinion. This idea brings in the question of when is something or someone considered to be alive? Does is happen at conception, when the brain is developed, or at birth? Some say you are a living person when you can understand things such as cause & effect, and have emotions towards others and things.

Most Christians and pro-life supporters believe that life begins at conception therefore it is a doing of murder which is against the Ten Commandments, a list of historical rules and laws written by their God. In the past, abortion was a normal procedure for women who had committed adultery but as time went on and ethics around the world changed, so were opinions on such topics as this. Scientifically, there is a difference between a human being and a living being. Bacteria, bugs, etc are all examples of living things but nobody is fighting for those rights?

A fetus is not a human, even after conception. A fetus is simply the potential of a human life. Approximately 75% of conceptions result in a miscarriage according to 2014 statistics. By definition, a human being is a separate individual who relies on multiple others for survival while a fetus not only resides inside a woman, but relies on her and only her for a future life. Women all around the world have been fighting for gender equality for decades. Many countries have been quite successful including the United States, but there is still much more inequality that needs to be addressed. Abortion is a big controversy due to the fact that it is not only a life changing decision but because of the ethics and morality behind it. The right to an abortion is key for a woman to achieve her full potential. The approximate price of taking care of a baby in its first year is roughly $12,000.

Many women can barely even afford to have an abortion, let alone care for a human life for another eighteen plus years. 2015 statistics say that about 18% of abortions are performed on teenagers. Teenagers who are still in school and have their whole lives ahead of them. Should one adolescent mistake obscure or possibly sabotage this? Teenagers are also more likely to miscarry during their pregnancy or have a complicated pregnancy. The medical risks of teenage pregnancies are very real for both the mother and the child. Lack of prenatal care (due to being pregnant unknowingly or embarrassed to tell someone) is necessary to prevent or predict birth defects, and high blood pressure is more common in pregnant teens than those in their twenties possibly causing premature birth and low birth baby weight. Most teenagers are not mature enough or even ready to mature for a child. It is in their best interest to keep abortion a safe and reliable option. A popular argument used by those who are against abortion is that adoption is a simple alternative.

In Randie Bencanann’s article, “Adoption Is Not a Universal Alternative to Abortion, No Matter What Anti-Choicers Say” she explains that while working in the adoption acency for almost thirty years, she came out only supporting abortion more strongly. After seeing the abundant amount of children unable to find homes and how many of their mothers had been unable to go through with the procedure because of price or embarrassment. “Some women were, and are, able to get solace from providing a good home for their child and giving joy to new parents. Even so, though, the process also nearly always involved anxiety and long-term sadness.” (Bencanann). She stated that the feelings the mother had about setting their child up for adoption was very similar to the guilty feeling of an abortion but worse after having nine months to attach to them. There is a view called “gradualism” in which as the fetus develops further, people are more likely not to have an abortion due to personal feelings and ethical reasons, therefore making giving them up to strangers or people they don’t know too well much harder.

According to the Dave Thomas Foundation for Adoption, “There are 423,773 children in the U.S. foster care system; 114,556 of these children are available for adoption. Their birth parent’s legal rights have been permanently terminated and children are left without a family”. Clearly, more children do not need to be added to these statistics. Adoption is not a bad decision of course, but I feel as though abortion should still be an option for the mother who may not want to get attached to their child just to give them up. A few other examples in which someone would not want to terminate their pregnancy due to ethical reasons include the right to life, abortion in self-defense and moral parenthood.

Personally, I think that the positives outweigh these negatives. Women who are raped, or underage may not want to take care of a child. They may not have the means to fully support a child on their own and the amount of children in adoption and foster care is more than enough already. In other arguments, women should be entitled the right to their own body and what happens to it. A baby is a lifetime commitment that some women cannot handle. In the late 1960’s and early 1970’s, women’s rights were becoming a more highly accepted thing, bringing in effect the controversial court case of Roe v. Wade. Two women, Linda Coffee and Sarah Weddington who were recent graduates of The University of Texas Law, began fighting in support of pregnant woman Norma L. McCorvey, also known as Jane Roe. At this time abortion was extremely looked down upon and banned or avoided at all costs by most states. Roe was unable to afford leaving her state to one in which the procedure was accepted.

Coffee and Weddington took it upon themselves to file a lawsuit against Henry Wade, a Dallas Country District Attorney. The case was eventually ruled unconstitutional because it was considered to be a woman’s “zone of privacy” and therefore protected by fundamental human rights. Roe v. Wade proved to be a huge accomplishment in both the women’s right movement and also pro-choice support. Before the court case Roe v. Wade in 1973, approximately five thousand women died per year due to unsafe abortions. Abortion legality allows women to attain the procedure at the correct time and in a safe and way. Today, it is a very safe and common procedure in the United States but in countries where abortion is illegal, people continue to perform it but in dangerous and harmful ways and in these countries it is the leading cause of effects on maternal mortality. Keeping abortion legal in the United States is the best and safest solution for women.

Continuing the legalization of abortion is only the smartest, safest and fairest decision. It is in the best interest of everyone involved because of how life changing a child is. There are many different options for pregnant women and abortion should not be taken away as one. By reading through a few articles I have discussed and argued the idea of abortion in a positive way using scientific facts and statistics and real life examples.

An Argument in Favor of Abortion Because Women Deserve the Right to Have a Choice. (2021, Sep 16). Retrieved from https://studymoose.com/an-argument-in-favor-of-abortion-because-women-deserve-the-right-to-have-a-choice-essay 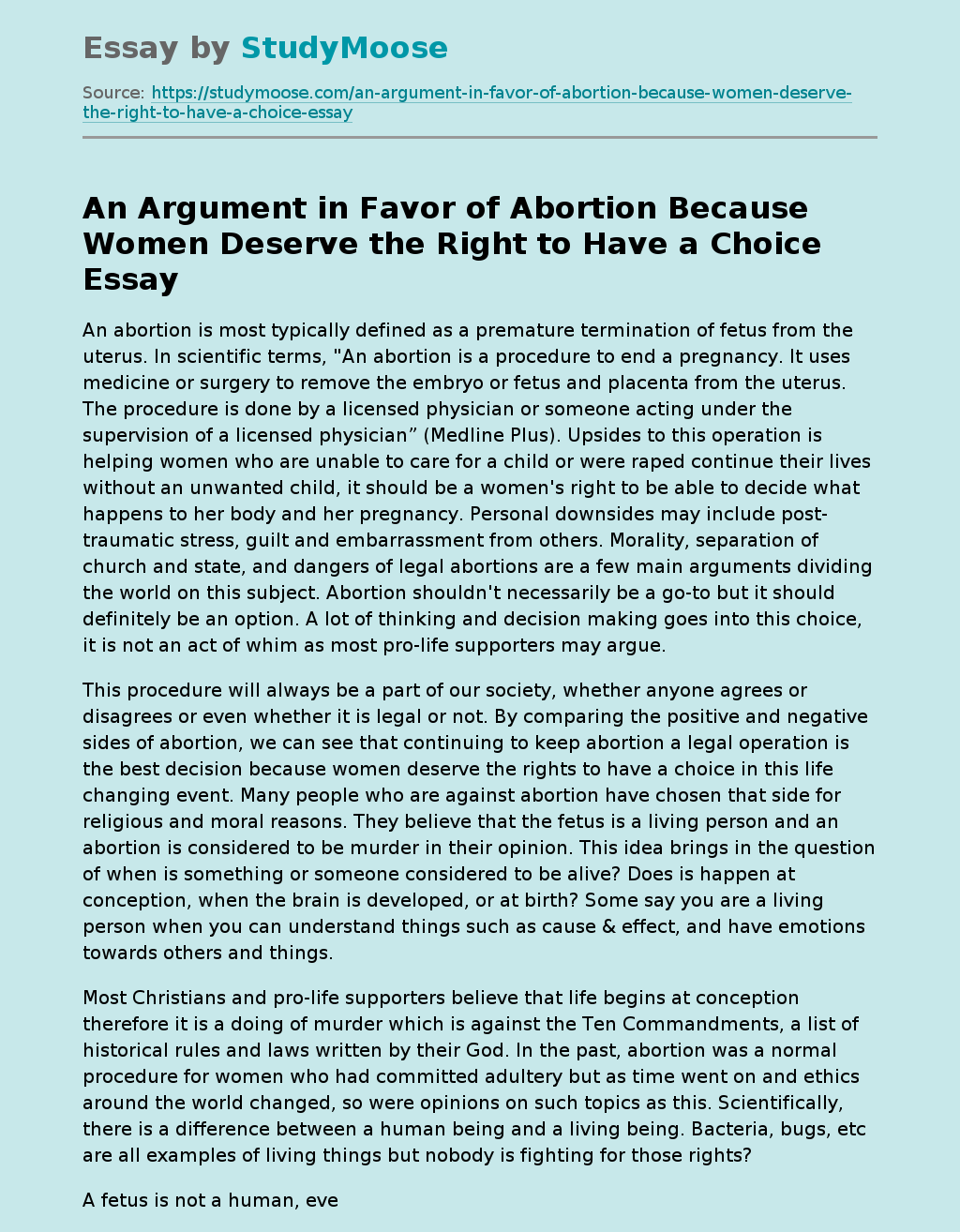