An Argument Against Death Penalty in the Eight Amendment

“The death penalty is not one of the ‘cruel and unusual punishments’ prohibited by the Eight Amendment.” (Winters 12).

Capital Punishment has been around since the beginning of time as has the controversy surrounding it. There have always been pros and cons to the death penalty as have the arguments that go with it. The crimes that were deserving of the death penalty have changed over the years but some have stayed the same throughout the centuries. Some people have said that by allowing the killing of a criminal, it will only teach others that revenge is what capital punishment is all about, instead of seeing it as a means to removing a danger permanently from society.

Don't use plagiarized sources. Get your custom essay on
“ An Argument Against Death Penalty in the Eight Amendment ”
Get custom paper
NEW! smart matching with writer

Hopefully this essay will educate the reader on the importance of capital punishment.

According to the encyclopedia Britannica, capital punishment, ” is the penalty of death, pronounced by a competent court.

” (Encyclopedia Britannica 809). This means for a criminal to be sentenced to death, the court must be fair in all mannerisms towards the criminal and in the sentencing. “In 1608 the first recorded execution in the new colonies occurred in the Jamestown colony of Virginia. Captain George Kendall [who was accused of being a spy)…In 1632 Jane Champion…became the first woman to be put to death [for the killings of her masters children].” (Rein 1). This shows that people back then were determined to have a safe environment to live in. Since the beginning of the use of capital punishment there have been many various forms of execution that was used. The forms that have remained though are; hanging, firing squad, lethal injection, gas chamber and electrocution. Some argue that these forms of execution violate the eight amendment, but do they really? If one looks at in the way the victim of the killer died then compared to that, lethal injection sounds fairly kind. Not all states endorse the methods of capital punishment and not all states support it.

In analyzing capital punishment, a person must look at it from all angles. People need to be aware that it is not used as a means of “revenge”, but as a permanent removal of a dangerous criminal from society. It has been noted that for the victims family, knowing that the killer of their daughter/son has proven to a form of closure for them. It doesn’t make their grief any less, but there seems to be a sense of relief knowing that the killer can never hurt anyone again. There have been accusatory remarks towards those that believe in capital punishment, implying that it is used as revenge. This is clearly not true, it is used as a means of justification for the crime committed.

It has been said that the use of capital punishment has been racially biased, again, that is not true, capital punishment is used on all races, all ethnicity and all genders. There have been clearly more males put to death then females but that is understandable because men have proven that they are more likely to kill then women. Statistics have shown that in a murder, it is usually against the same ethnicity as the killer. For a white who killed another white, “51.7 percent” while a white killing a black the percentage was much lower, “1.5 percent.” (Rein 49) This seems to prove that these are not killings based on ethnicity and the sentence is not racially biased.

Is capital punishment ethical? That can depend on who the question is put before. When it is used as a means to permanently remove a danger from society then it is absolutely ethical. According to the Egalitarian view on capital punishment, if one is guilty of killing then he should be killed. This seems to follow the old adage “an eye for an eye.” (MacKinnon 307). This may sound like revenge, but it isn’t. Does the one accused of murder deserve to live after he/she has taken the life of someone? The answer should be , no. If they have deprived a person of their life, deprived a family of a loved one then by all means, that person should pay for their crime. There have been conflicting thoughts on the egalitarian thought of punishment. If the victim is raped and then murdered, the legal system can not have the criminal raped and then murdered, that would be violating the eighth amendment. So really there needs to be a medium where the punishment fits the crime and the criminal.

Does the criminal want to die? Probably not. Is he sorry for what he has done? Probably not, he is just sorry that he got caught. In more cases then naught, the criminal is not sorry for what he did. He was just sorry that he got caught instead of remaining out in society where he was free to commit the crime again. Is the criminal afraid of capital punishment? Probably so, no one wants to die but he may be to “tough” to admit being scared. He would rather sit on death row saying how he doesn’t care, he isn’t scared etc…but at the last moment, right before he dies a single tear winds its way down his cheek. This is human emotion that only an extremely hardened criminal could deny. It is not natural for the human spirit to give up and die, it always wants to fight, fight to live. That is why, in some instances, it has taken longer for the criminal to die because his spirit won’t give up that last breath.

If capital punishment was removed from society, everyone would suffer. The reasons being; it is justifiable and it is seen as a deterrent to other or more crimes. Justice is served when a killer is punished for the crimes he committed. Knowing that the killer won’t get away for the crimes he has committed and knowing that our justice system will hand down a fair judgment punishment reassures society that they can believe in and trust the legal system. By acting as a deterrent, the thought of being killed for a crime will hopefully scare would-be criminals from acting on their intentions. If the criminal knows that he is just going to get life in prison, that may look rather appealing, no work, free food, free lodging etc… Instead, if the criminal knows that by committing a heinous enough crime then he will be punished by the removal of his existence.

An Argument Against Death Penalty in the Eight Amendment. (2021, Sep 27). Retrieved from https://studymoose.com/an-argument-against-death-penalty-in-the-eight-amendment-essay 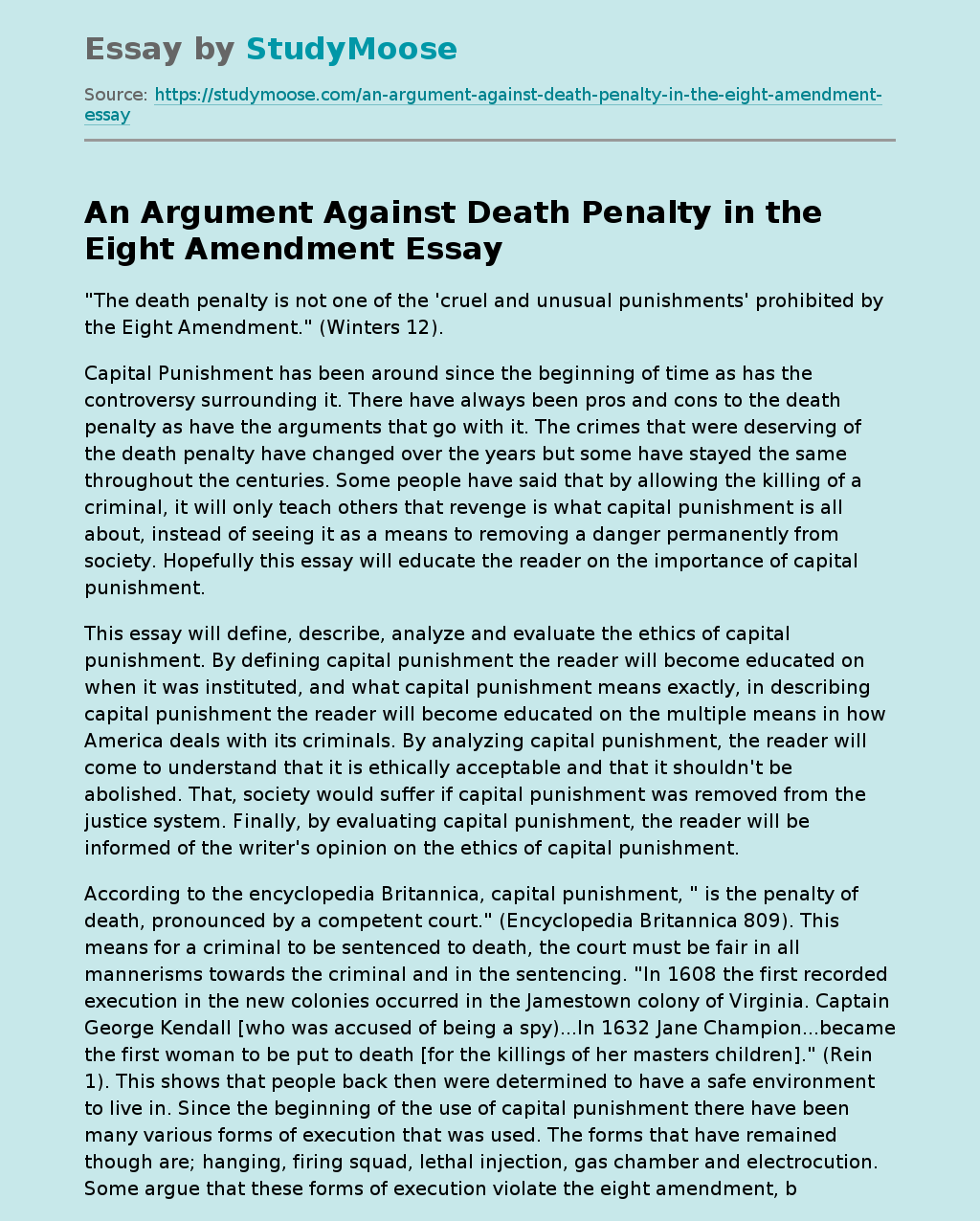