An Analysis on Markus Zusak's The Book Thief

Sometimes, the thing that you don’t see yourself being good at might be the thing that you later become obsessed and passionate about. I mean, the chances of things, that you least expect, to happen death , for example are probably just lingering around the corner. Maybe not now, but eventually. And maybe not to you, but to those who surrounds you.

In the years of 1930s to 1940s, the Second World War or World War II has emerged, proceeding Germany’s defeat against Britain and France initiated by the Nazi Party Leader and German Chancellor, Adolf Hitler (HistoryPlace.

Don't use plagiarized sources. Get your custom essay on
“ An Analysis on Markus Zusak’s The Book Thief ”
Get custom paper
NEW! smart matching with writer

Where a lot suffered greatly, literature including music and the arts. Local and international book authors were to leave the country for not writing glorification of the war, of Adolf Hitler, of the Aryan ideal, Nazi Germany and etc.

In part to share the stories his parents told him about growing up in Germany and Austria during the World War II, the 2006 Kathleen Mitchell Awardee, Markus Zusak, came to a concept of a young adult, historical fiction, novel, called The Book Thief (Zusak).

Later then adapted into a feature film in 2013 by the Australian film writer, Michael Petroni, under the direction of the 2011 Primetime Emmy Awardee film director, Brian Percival. Which story’s revolves in Liesel’s childhood a childhood not typical as other’s that all started when she was fostered by Rosa and Hans of Heaven Street in the outskirts of Munich. She arrives without the knowledge of reading, but with the help of her foster father, she learns to love the power of words and the art it brings, and starts to write her own too. She, at that time, is exposed to the horrors of the Nazi regime, caught between innocence and the maturity demanded by her destructive surroundings. Liesel learns about her mother being a communist that probably be the reason why she (and her late brother who died on the train) is up for adoption. In a book burning ceremony, Liesel’s love for literature prevails and steals a book from a pile of the burnt ones. In that very scene, Liesel’s character perfectly portrayed the people being deprived from reading specific book genres for the government, at that time, banned books and Jewish authors who write things not promoting Hitler and the Nazi regime (CN, Trueman). Yet, Liesel finds courage in words and begins stealing books despite of the government’s rule. As the political situation in Germany continues to deteriorate, her parents conceal a Jewish refugee named Max, who is a son of Hans’ late friend whom he owes his life to. Liesel, later grew closer to Max, sharing him her love for words and literature. Despite Hitler’s strict laws regarding literature during the war, the walls of the Hubermanns’ basement continues to be filled with words and Liesel never stopped reading, which I find a beautiful portrayal of hope in a wartime. Zusak’s creative idea of choosing Death as the narrator translates our perspective of Death from something everyone is scared of, or the old Grim Reaper, to a part of us that knows all the time that we’re going to die, reminding us to live properly, and that Death is a friend in disguise. “you’ll meet me soon enough. Not before your time, of course.” – Death. Death has successfully played his role, which is to sustain the audience’s curiosity of the narrator’s identity because I, myself, was wondering from whom the voice is from, I even thought it was Max’s one of the factors that gave me the thrill and spiced up my desire to finish the movie.

Then, Max painted the pages of his book, about Hitler, with white paint and gave it to Liesel as a Christmas gift for her to fill them with words. “Words are life, Liesel. All those blank pages…they’re for you to fill.” – Max. One night, Liesel went to the basement and decided to start writing on it and she did but luckily and unintentionally she slept there which is a blessing in disguise for it saves her from the bombing that happens that night. The bombing destroys the Heaven Street, leaving only broken debris of their neighborhood. At some point, the book saved Liesel because if she didn’t come to think of writing that night, she might probably be sleeping upstairs and worse, killed by the shower of bombs together with her foster parents and their neighborhood. I am amazed how Zusak come up with such scene for it teaches us, audience, an important lesson to value things, big or small, because no matter what size it is, it will always have its role to play.

Overall, Zusak was able to present his purpose with creativity which is to tell his parents’ childhood stories during the war. His creativity, together with Brian Percival’s, made the film worth to finish till the credits. Though, I seem not to understand some parts where the characters spoke German language, it may have been better if they provided subtitles in that certain parts. And the rest, it was all a masterpiece.

An Analysis on Markus Zusak's The Book Thief. (2021, Nov 21). Retrieved from https://studymoose.com/an-analysis-on-markus-zusaks-the-book-thief-essay 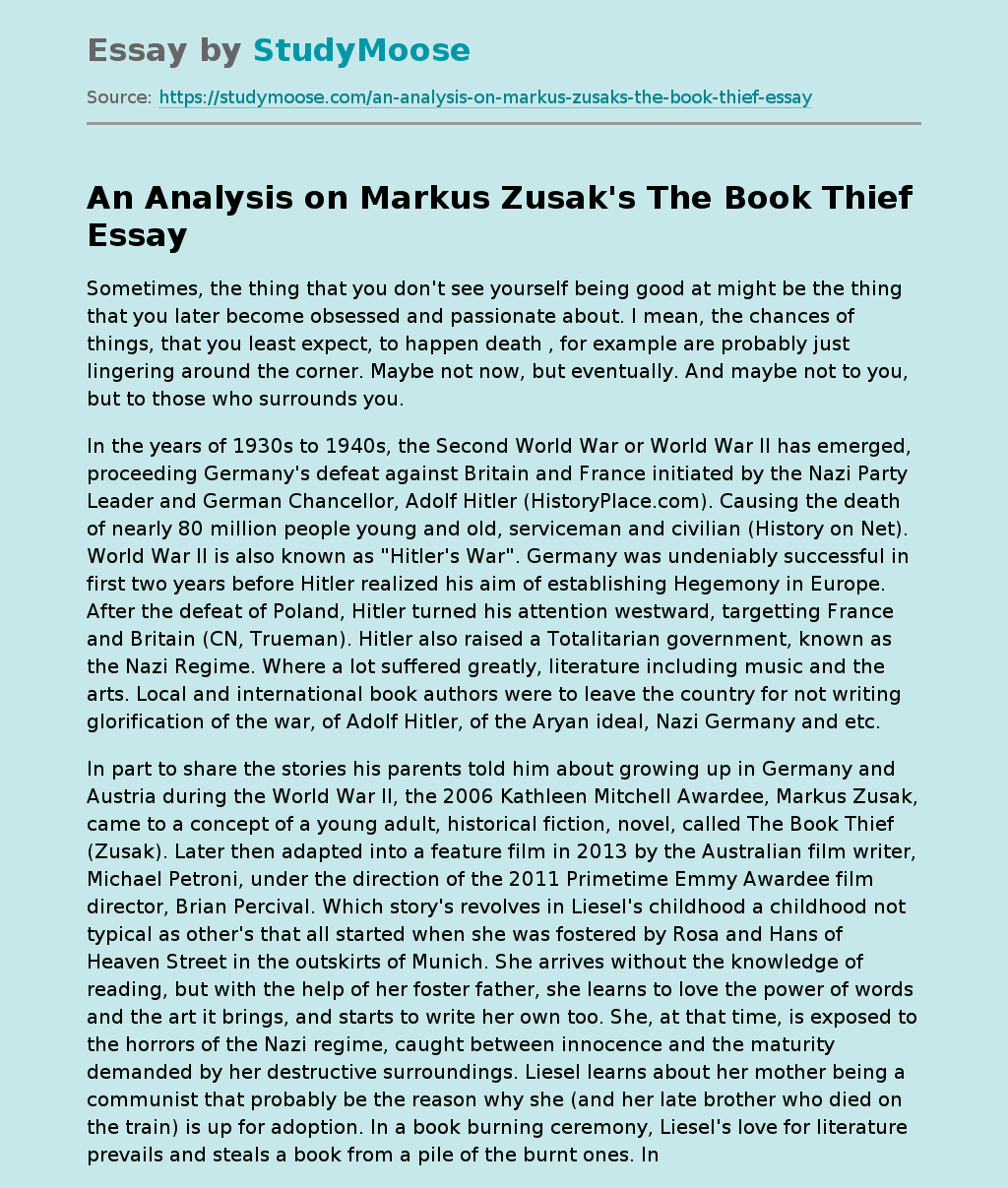