An Analysis on "American Gothic" by Grant Wood

“Without atmosphere a painting is nothing.” This is a quote by Dutch painter and Etcher. There have been several painters who focused on the atmosphere of the locations or spots that they chose to draw on their canvas. However, some of the painters founded themselves mysteriously involved into the environments of places that they visited. One of those painters is Grand Wood, who painted the American Gothic. Wood made certain atmosphere the bases of his painting and through his unique style of painting impressed everyone who liked good artwork.

Don’t waste time
Get a verified writer to help you with An Analysis on “American Gothic” by Grant Wood
Hire verified writer
$35.80 for a 2-page paper

As a result, the painting stands amongst the likes of Mona Lisa and other highly famous paintings today.

There, along with many other paintings, American Gothic was also displayed for the visitors to see.

Experiencing American Gothic through Computer VS in Person
When I visited the gallery 263 and finally looked at the American Gothic painting by myself, I realized the importance of seeing an artwork by one’s own eyes instead of looking at in on a computer or in books. The painting made that was oil painted on Beaver Board was 78 x 65.

3 cm in size and there was the signature of Grant Wood on the lower right corner on the canvas along with the year 1930. Since I was there just to see and analyze the American Gothic, I stayed in front of the painting after other visitors moved towards other paintings.

Masterpiece Turned Into Senseless Parodies
As we all know there have been countless parodies of the American Gothic out there, some of which are harmless parodies while many of them are totally absurd attempts. After looking at the painting for several minutes I got a bit uncomfortable because I found the two characters (Painter’s sister and his dentist) a bit creepy. The way the lady is looking at her father, who seems to be a hardworking farmer, and way the farmer is looking at us holding a pitchfork in his hand is what gives the painting another meaning than just two individuals standing in front of a farmhouse made using Carpet Gothic style. However, creating parody after parody by different people is what I find disrespectful to the legendary art such as this one. If you praise something, you should respect it and not make fun of it or use it is a source of humor because I found everything in the American Gothic but humor.

Existence of Conflict in Concern with the Expectations of Society Earlier we have discussed themes and roles of the artist that conflicted within the expectations of society. If we talk about whether or not the American Gothic had elements that conflicted within the expectations of society, we would have to say yes. For the reason that not everyone sees a particular thing in the same way, various people perceive certain things in different manners. Same is the case with American Gothic as Lunday, in one of her most interesting articles said that; “Some perceived the work as a scathing parody of the Midwest—one outraged farm wife even threatened to bite off Wood’s ear.” (Lunday, 2012)

The Fame and Acceptance Earned By the Artwork
There is a complicit that American Gothic holds within the expectations of society. However, the amount of praise this painting has received completely outweighs the negative remarks or reviews that it received. As Lunday mentions in the very article ‘Honest and Creepy, Satire and Homage: Grant Wood’s American Gothic’: “Meanwhile, Gertrude Stein and other critics praised the painting as a cutting small-town satire, the visual equivalent of Sinclair Lewis’s Main Street. Still others saw the painting as honoring the Midwest and its strong values.” She furthermore said; “During the Great Depression, the masterpiece gave hope to a desperate nation, and it helped shape the notion of the Midwest as a land of hard work and honest values. Today, the painting is firmly embedded in our cultural vocabulary.” (Lunday, 2012)

Without Atmosphere a Painting Is Nothing
It is apparent that Wood believed that the environment of a painting is the most important element of a painting. This particular painting proves this point as the painter chose his dentist and his sister as his subjects just because there was no other model available to pose for the painting in front of the wood farmhouse. Wood took help of his mother in making his paintings as she would agree to become the subject for many of Wood’s paintings. However, while Wood decided to paint the American Gothic, he realized that his mother won’t be able to stand in the field for that long while he paints, so he chose his sister instead. Wood chose his dentist and his sister because he couldn’t afford to lose the opportunity of painting the Carpenter Gothic style farmhouse that he came across while visiting the small town of Eldon in his native Iowa. This reminds me of a quote by Rembrandt Harmenszoon Van Rijn, which seems completely fitting to what Grant Wood was all about: “Without atmosphere a painting is nothing.”

― Rembrandt Harmenszoon Van Rijn
Wood’s imagination was wide-ranging. He foresaw the fame and acceptance that this particular painting will get by analyzing the environs around the wood farmhouse. When he saw the house’s strange yet compelling arched window in the Carpenter Gothic style, the first thing that came to his mind was to find out what sort of people lived there. However, instead of knocking on the door, the painter decided to capture the farmhouse in paint and tease out the story for himself in effort to sort through the puzzle, piece by piece. (Lunday) “I imagined American Gothic people with their faces stretched out long to go with this American Gothic house. – Grant Wood.

Final Words
American Gothic doesn’t fall in the category of Primitive art as the elements it holds are usually found in such paintings and artworks that are related to modernism. Though countless individuals made parodies of American Gothic but actually the real artwork cannot be copied or reproduced to give another painter fame and fortune. The idea of anchoring a painting on the environs of a farm field and a farmhouse was the creativity of Grand Wood which cannot be repeated again in the history of arts. However, if one bases his art practices around the quote “Without atmosphere a painting is nothing.” there would be minor chances that we might see another painting somewhat as good as American Gothic.

An Analysis on "American Gothic" by Grant Wood. (2016, Apr 03). Retrieved from http://studymoose.com/an-analysis-on-american-gothic-by-grant-wood-essay 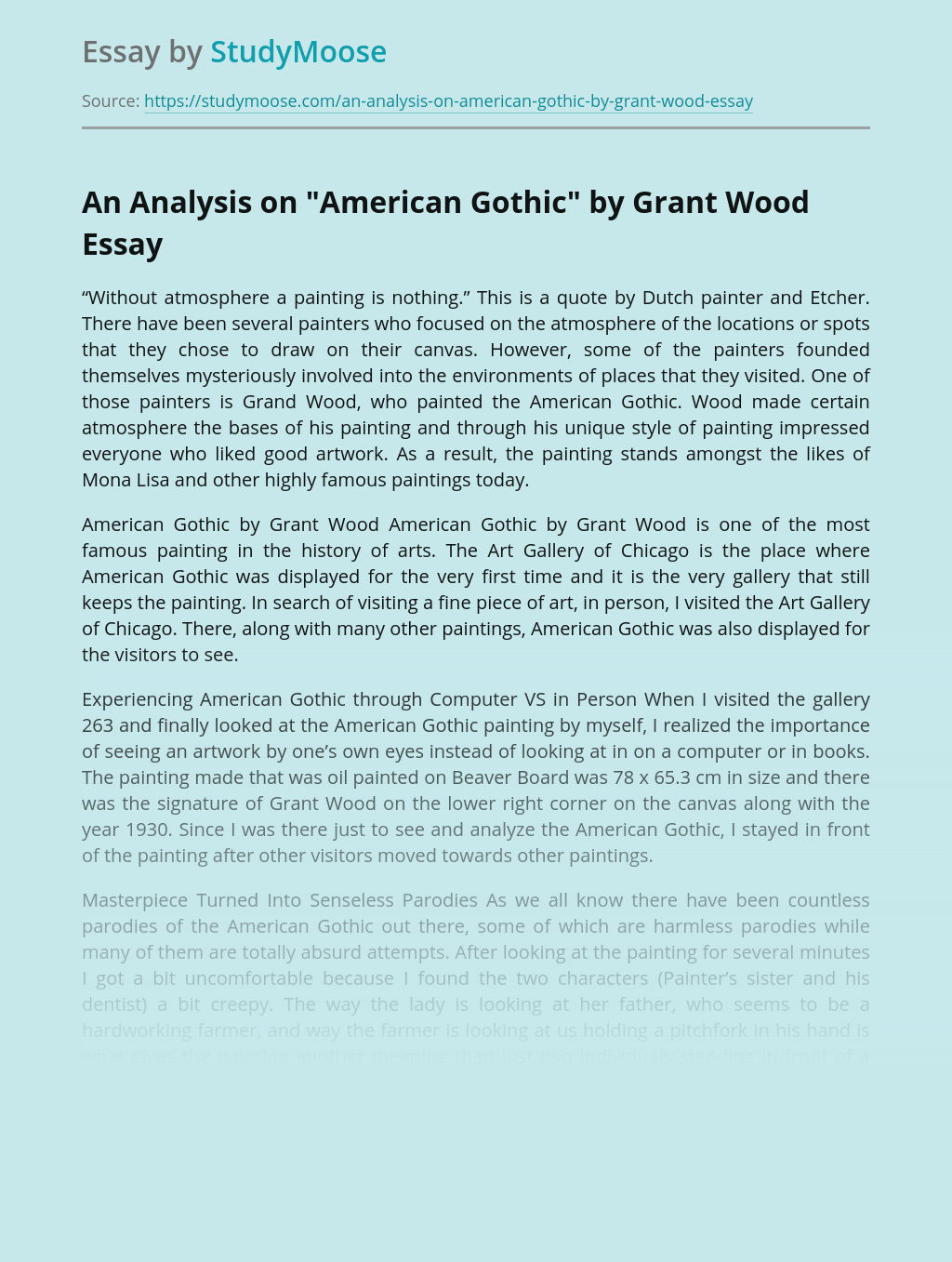 Don’t waste time
Get a verified writer to help you with An Analysis on “American Gothic” by Grant Wood
Hire verified writer
$35.80 for a 2-page paper
Stay Safe, Stay Original