An Analysis Of What Is Enlightenment By Kant Philosophy

The title of the essay was ‘what is enlightenment’ it was written in 1784, in the essay he basically replied to a question that was put forward an year earlier by Reverand Johann Zollner, he was also a government official. Reverand had posed an open question to all about removal of clergy from marriages, many people replied but the most famous one is by Kant. The essay reflected the present situation that existed when he wrote the essay. The situation had 3 basic characterstics: the present was different from the previous eras in some distinct way, second; it represented some important upcoming events; third; it meant that the world was moving towards something new.

Don't use plagiarized sources. Get your custom essay on
“ An Analysis Of What Is Enlightenment By Kant Philosophy ”
Get custom paper
NEW! smart matching with writer

In his essay Kant discusses the reasons for the absence of enlightenment and what is required from people for enlightenment to flourish.

Kant defines enlightenment that a person achieves when he frees himself from immaturity that he caused himself. Immaturity to Kant means an inability to be able to think on your own and to rely on other people’s opinions to make decisions, this also means that a person is immature if he is unable to use his own judgment and understanding of things.

Kant further explains that the immature person is so because he lets others decide for him and he becomes dependent on help from others so much so that acting and thinking on your own becomes some thing very difficult. Here to explain his argument Kant draws an analogy of the influence of government on its people with tamed animals, who are trained to not cross a certain boundary without their carts by making the animals aware of the dangers that lie ahead.

This makes the cattle afraid to even try and see for it self. In the same way the government provides its people with a set of beliefs and ideas that the immature person immediately agrees upon and which aids in furthering his immaturity.

Kant argues that it is extremely difficult for a man to reach maturity alone but it is easy for a number of people to do so together. The reason is that when a person starts relying on others for guidance he finds it increasingly difficult to break out of that pattern and start thinking on his own as any mistakes he makes will highlight the defects in his way of thinking. Kant also hints in his essay that a person needs certain qualities to leave immaturity, and these include fearlessness and vigor.

Kant explains that public use of freedom is absolutely essential for enlightenment to take place. He says once people start expressing themselves openly in public forums, these thoughts will eventually influence decisions taken by those in positions of authority.

Kant also differentiates between expressing of ones opinions and acting on those opinions, he uses an example of a clergyman at the church. He is appointed on the condition that he will teach the principles laid down by the church so he has to teach them as it is. However he can point out constructive criticisms in the way of working of the church which can then be reviewed by his seniors. Thus Kant points out that one can not achieve enlightenment without following the laws of the society, he has to obey the laws but at the same time he should have the courage to criticize what he things is wrong or should be changed. So for him any society that does not obey the laws cannot achieve enlightenment.

Kant lived at a time when Monarchy was prevalent in the world and it was considered one of the best ways of running a country. So a question arises here that is this theory acceptable in a democratic environment? My answer is No.

Kant says that revolutions are counterproductive as new ideas replace old ones those new ideas are imposed on the immature population like the older ideas were. So according to Kant the situation brings about no difference but this is not true for a democratic world where rulers are selected by the people and can be changed if majority of the population is dissatisfied. However one of the unique principles of democracy is that people have freedom. They have the freedom to think and either choose to extend the current governments terms or elect a new leader if they are not satisfied with the performance of the current one.

Thus it is evident that the slow and gradual change that Kant talks about can be implemented in Monarchial society, it may even be the most efficient way of bringing about change but in a democratic world this is not possible.

Another aspect is that in order for a theory to be effective it needs to draw a middle ground between theory and practice. Some philosophers lack the judgment to make the theory practical others are unable to complete their theory as they lack some form of practical experience. Kant’s theory is also lacking in some respects.

Kant’s theories in general have often been criticized as too vague to be practical and useful. All human beings live in a certain time period and place. It is often not possible to separate rationality from our personality, so often we ponder over some issues that others are facing in an abstract way but for anything the starting point should be our own situation. It has often been assumed by many philosophers that we can be rational and we can put our personalities aside to come up with principles that apply to all, but this is not true. Philosphers like Kant assumed this because most enlightenment thinkers were from the same period and place (Europe) this lead them to think that their answers were rational but they were not, they also reflected the culture that these ideas originated in.

Kant’s theory has resulted in criticism and arguments from many philosophers, however whatever one thinks about this philosophy one thing cannot be ignore; i.e. its historical significance. So many years have passed yet Kant’s theories continue to influence us and the concept of freedom introduced by him has been embraced very clearly by all and thus his work is also very important in helping us understand what enlightenment and freedom is all about.

An Analysis Of What Is Enlightenment By Kant Philosophy. (2019, Aug 19). Retrieved from https://studymoose.com/an-analysis-of-what-is-enlightenment-by-kant-philosophy-essay 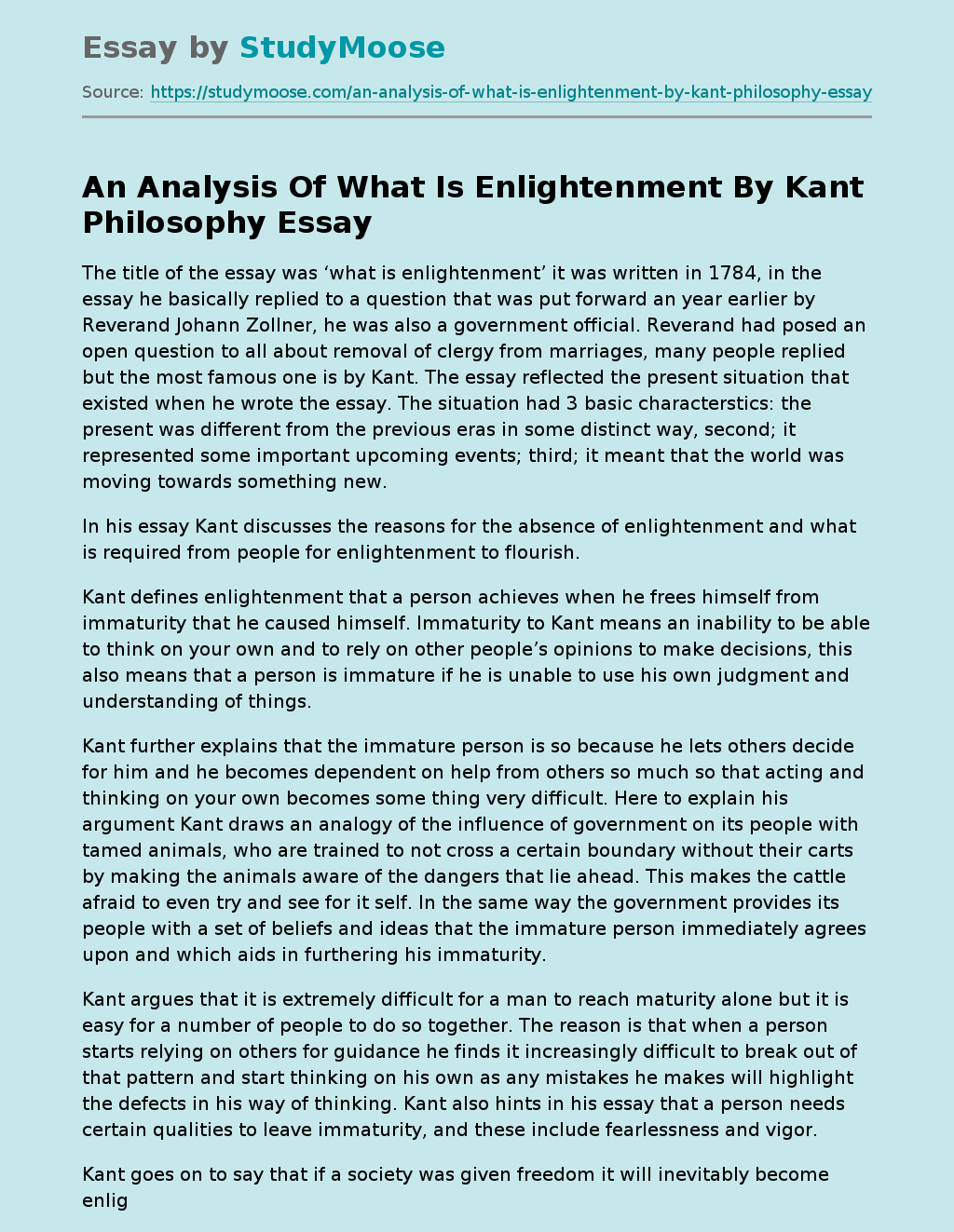