Equality between men and women is an ongoing issue in corporate America. The wage gap is prevalent in a multitude of professions, and although it gradually improves as years pass on, it is still a problem. From an economic perspective, there is a complicated combination of mathematical factors that result in the wage gap. Contrastly, feminist theories connect the gender wage gap to the underlying sexism of a patriarchal society. In this essay, I will be comparing and contrasting the economic and feminist approaches to analyzing and closing the gender wage gap.

Don't use plagiarized sources. Get your custom essay on
“ An Analysis of the Wage Gap Between Men and Women in the Workforce ”
Get custom paper
NEW! smart matching with writer

The first discipline I dove into was economics. An article published by The Economic Journal titled, “The Output Cost of Gender Discrimination: A Model-based Macroeconomics Estimate” (2016) mathematically and analytically interprets the causes and effects of the gender wage gap in the workforce.

The article is separated into four sections: the model, analytical results, numerical results, and concluding remarks. The model outlines men and women’s lives into periods: “In the first period, as children, women and men are indistinguishable…in their second period of life, agents become adult men and women, organised as couples, and differ in their productivity in raising children.

We assume that women are more productive than men in raising children but they are equally productive in market activities. Both men and women can use one unit of time, divided between time at work and time raising children.” This insists that women often have a motherly responsibility that prohibits them from advancing further than men in the workforce. This is applicable to some situations, even more so in previous decades where women were expected to spend most of their time at home. Companies must adhere to certain requests women can make i.e. maternity leave when pregnant / after giving birth), and that can affect a woman’s production compared to that of a man. This part of the argument could be considered controversial because of its underlying sexism, assuming that women will take time off for maternity. Continuing on, both the analytical and numerical sections of the article present the argument using complex equations specific to their discourse community. The average reader would not be able to comprehend the math at first glance, showing the intended audience for the article. Thus, this economic article presents its argument in a situational and mathematical form.

My second literary practice in the economics discourse community is a book called Promoting Gender Equality At Work, edited by Eugenia Date-Bah (1997). The entire book focuses on the wage gap for women around the world. In the section I analyzed, the author breaks down the gap into an economic perspective: “There are inherent conceptual and methodological problems in trying to separate the effects of adjustment from those of recession and also from longer-term trends. The secular rise in female labour force participation in most countries over recent decades and the longer term shifting patterns of sectoral representation of women workers need to be separated from the impact of recession and adjustment.” This quote explains in an economic dialect that the financial state of the workforce is going against any type of female improvement, which is keeping the wage gap as an issue. Women will not be able to progress so long as the economy’s stability is declining. This book uses linguistics that are not easily comprehensible to a person who does not have prior knowledge on economics, and in this case, macroeconomics.

Next, I move onto feminist studies (which is also my current declared major.) An article published by the NWSA Journal titled, “The Cost of Being a Girl: Gender Earning Differentials in the Early Labor Markets” (2008) explains that the wage gap, which is usually determined by adults in the workforce, actually begins in teen years. In a subsection titled, “Prior Research,” the article states that the gender wage gap is due to gender roles deeply rooted in society: “Lower productivity of women has been associated with proposed differences in education and experience between men and women. Earlier studies have argued that different levels of formal education between men and women account for the gender wage gap, but this explanation has failed to explain fully the gender-based differences in earnings…However, many similar studies have shown that years of experience on the job accounts for a substantial portion of the gender wage gap. Due to women’s traditional domestic duties, such as child rearing and housekeeping, the average woman on the labor market has fewer years of experience than the average man, which contributes to the difference in pay between men and women.” Similar to the economic article’s argument, the feminist discipline also places blame for the wage gap on the idea that women are to stay at home to be housewives. But, rather than using this stigma as justification as the economic article does), the feminist article sets out to demolish it. The article also lists other differentiations between men and women that lead to the wage gap, such as personality characteristics and occupational differences. Overall, feminist theory suggests that the gender wage gap is a result of the patriarchal society we live in, where woman is seen as less than man in a multitude of aspects; there is no mathematical justification for it, only societal flaws: “All these explanations focus on different aspects of employment that contribute to the gender wage gap, but even when all of these explanations are considered, a substantial part of the gender wage gap remains unexplained.” This further highlights the difference in approaches for each discipline. Concluding, in this article, the gender wage gap is accredited to many forms of sexism in society.

The feminist studies book I used as a literary practice is titled Women’s Work and Wages, edited by Inga Persson and Christina Jonung (1998). This book, despite being a part of the feminist studies collection, includes many economic linguistics and was edited by two economic professors. It is separated into three subsections: contents, figures, and tables. In the contents section, the feminist and economic ideals are immediately merged: “Research on the gender pay gap has traditionally focused on the role of what might be termed, gender-specific factors, particularly gender differences in qualifications and differences in the treatment of otherwise equally qualified male and female workers (i.e. labor market discrimination). An innovative feature of recent research on gender and race differentials has been to integrate the analysis of the gender pay gap as well as other demographic differentials into the study of wage structure in general.” This states that the skepticism of the wage gap being due to sexism must work together with statistical evidence in order to fix the issue. The figures and tables sections include lists of facts and references used to come up with the argument in the beginning and throughout the book. This specific piece of literature is a good example of the two discourse communities combining for the purpose of their arguments.

Both economics and feminist studies acknowledge the wage gap between men and women in the workforce. Their approaches to analyzing it differ slightly: economics focuses on the quantitative aspects, whereas feminist studies focuses on the qualitative. Economics are mathematically fact-based, whereas feminist studies are strongly opinionated with facts only to support the argument. Both discourse communities and all literary practices do agree on one thing: the gender wage gap is an issue that must be addressed and resolved.

An Analysis of the Wage Gap Between Men and Women in the Workforce. (2021, Sep 28). Retrieved from https://studymoose.com/an-analysis-of-the-wage-gap-between-men-and-women-in-the-workforce-essay 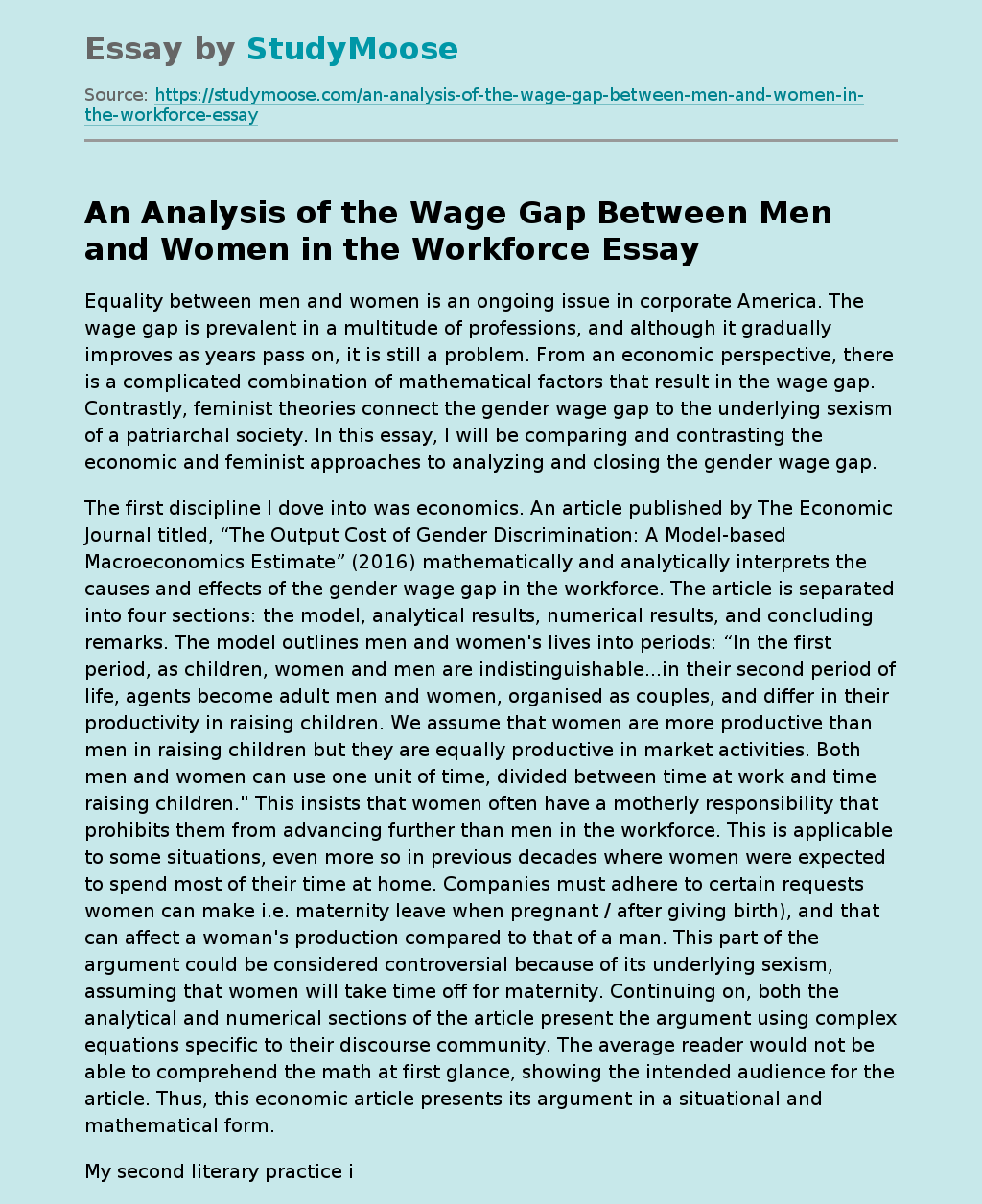