An Analysis of the Use of Puppets in Noh Drama

“A puppet is an inanimate object moved by a human agent before an audience with the intention of communicating something through the process of representation.” -Jane Law

It never occurred to me that Puppets might be utilized in Noh drama. Class discussion and the readings never approached the topic. I was very surprised to find references to it as I began to compile research for a journal entry assigned by my professor. The decision was easy, something had to be written about this obscurity.

Don't use plagiarized sources. Get your custom essay on
“ An Analysis of the Use of Puppets in Noh Drama ”
Get custom paper
NEW! smart matching with writer

If puppetry had not made its way into any of my class work the topic must be addressed. As I began my work it became clear that the relationship of puppetry and Noh is a mystery to most theater historians.

Brazell devotes one paragraph to puppets in his book. He takes the time to note the use of the puppets in the drama. He makes the connection between the ritual use of puppets and the transfer of puppets to the Noh drama and eventually to a dramatic theater tradition solely consisting of puppets.

Late medieval records mention Noh plays staged with puppets[they served as mediums in Shinto rituals to express the words and perform the actions of the godspuppeteers (ebisu kake) connected with the Ebisu Shrine at Nishinomiya and specializing in plays about the deity Ebisu were particularly well knownother puppeteers were connected with temples and presented tales about Buddhist deities and related themes. Not, however, until puppeteers joined forces with Joruri chanters and shamisen players was the Puppet Theater truly established.

Brazell does this in very vague terms alluding to medieval records she does not cite, the place of puppets on stage without describing their function or purpose, and writing one line about the establishment of a puppet theater. Brazell seems not to take this connection seriously. The paragraph about puppetry can easily be read or interpreted as smoke billowing out of Brazells train of thought.

Kuritz fails to make any note or reference to the use of puppets in Noh drama. This may either be because there is no actual primary texts that exist. Maybe he was uncomfortable with the lack of research on the topic. It is quite possible that he omitted it because it seemed obscure and unnecessary for his aims in the text (giving students an over view of theater history), which would be quite contradictory. It is unclear why he does not approach this issue.

With little help from the traditional journal/book essays I turned to the web. Takanashis history includes a link from puppet to Noh that was referenced by no other source. He links the creation of the puppets to the mask work of Noh. Takashanis history is very focused on the history of the Japanese puppet as related to modern puppetry.

It was in the 18th century, halfway through the Edo period, that Japan saw the debut of puppets, called “karakuri-ningyo,” with mechanisms fitted inside that made them move by themselves as for the Japanese puppets, their initial development dates back to the middle of the 16th century when “Nanban (foreign) culture” made its way to the country near the end of the Muromachi Era the Japanese (puppets], probably influenced by Japanese traditional, Noh plays, pursued abstract movements to express human emotions…the head of a Japanese puppet is created in the style of a Noh mask. Just; as a Noh performer wearing a blank mask expresses human emotions by slight movements, the abstract moves of the puppet stir feelings in the heart of the audience. (Takanashi)

As with the other texts, the Takanashi history lacks specific references and deals with vague ideas and referrals to medieval texts. Takanashis focus is so, the reader, once again, must question why the connection between puppets and their use in the Noh drama is not emphasized. Takanashi takes the time to point out the puppets derivative from Noh mask work, yet he does not mention the use of the puppets in the Noh drama. Like Kuritz, this may be a purposeful omission by the writer due to a lack of reliable sources.

Jane Laws text Puppets of Nostalgia provides a solid base with which to consider the theater histories and how they handle the issue of puppets. Law creates for us in her text the ritualistic and religious context from which Japanese puppetry developed. “the puppets were used in a ritual conducted by the local Shinto priest at night in the main inner sanctuary of the shrine.” (Law 40) Law goes on to connect these ritual puppets to the Noh Theater tradition. “Noroma ningyo designates four puppets used together to present short, humorous skits, usually derived from kyogen (skits performed in Noh).” (Law 40-41) These puppetry events began as interludes between long drama performances and eventually became known as a separate entity, Sado Puppetry.

Sado was used as a penal colony. Many important figures in Japanese history were exiled therethe island is famous for its mines, where prisoners were forced to work, sometimes to death. Another feature distinguishing this island is the prevalence of ritual and dramatic performances using puppetry. (Law 39-40)

Laws text is by far the best history of the puppetry tradition of Japan, but it lacks the context of Noh drama sought by a theater student. Less than 10 pages of her 263 pages of text actually deal with the link between puppetry and Noh drama. As we have seen the previous texts do not fulfill those needs as well. The primary sources that would cite such relationships are obscure and unquoted. They have alluded this author. To create a text for academic purposes one must not only expound upon the history of puppetry, but must include the primary sources for the Noh relationship to puppetry. This appears to be a true problem for theater historians. The greater issue, which this author has been unable to resolve: how do you create a theater history without the primary sources and secondary or tertiary sources that dont point you to the primary source?

I would conclude that there is no primary historical record of puppets being used in Noh drama. It seems that puppetry was a device used by few troupes and soon realized as a performance tradition of its own.

An Analysis of the Use of Puppets in Noh Drama. (2021, Sep 21). Retrieved from https://studymoose.com/an-analysis-of-the-use-of-puppets-in-noh-drama-essay 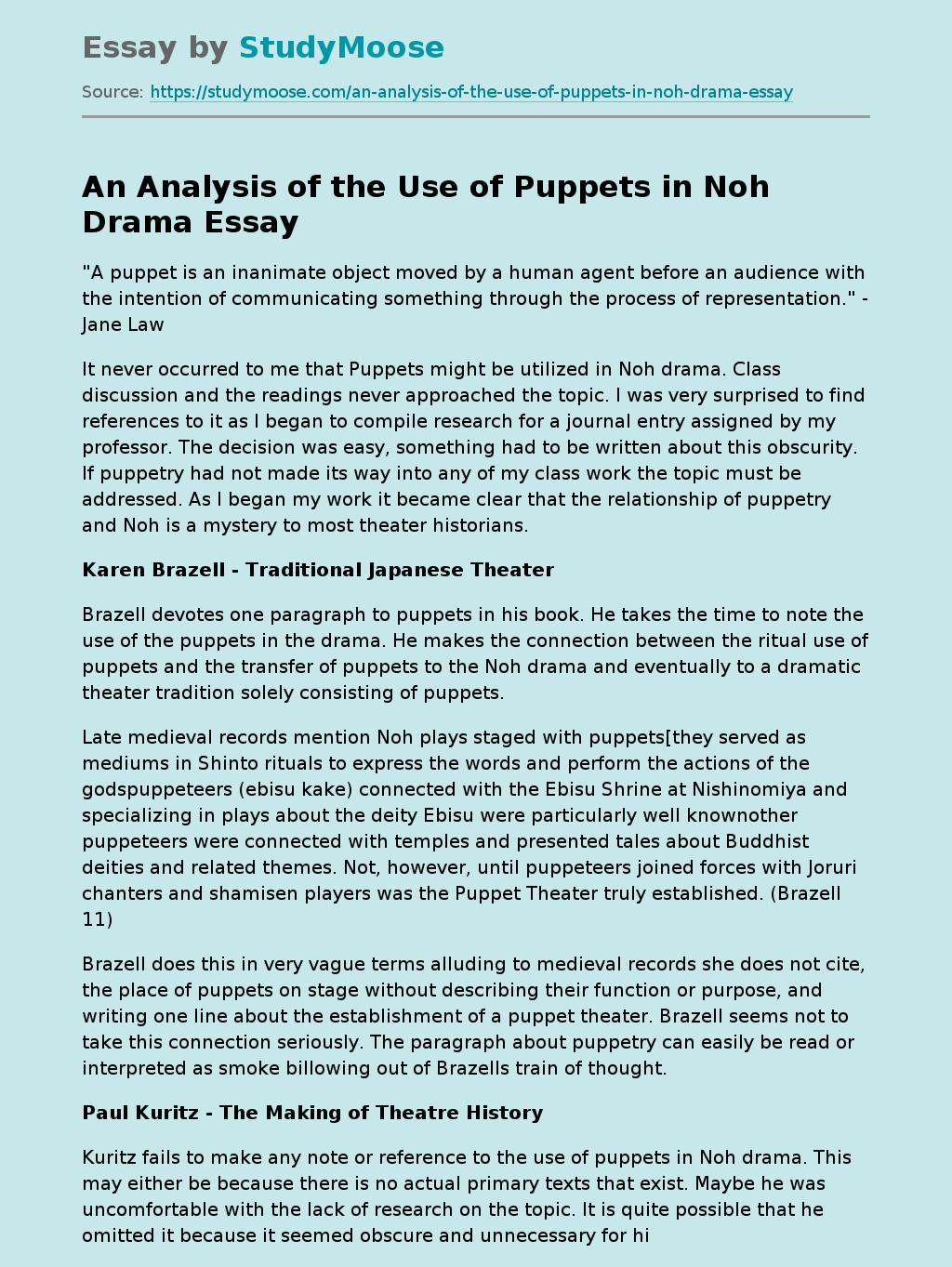