An Analysis of The Night of the Iguana by Tennessee Williams

On March 26, 1911, Thomas Lanier Williams is born in Columbus, Mississippi. Hes the second child and first son of Cornelius Coffin Williams, and Edwina Dakin Williams. Tennessees father is a traveling shoe salesman, and due to his frequent absences, his mother and sister Rose live with his maternal grandparents Reverend and Walter E. Dakin in the rectory of St. Pauls Episcopal Church. (Falk 22-23)

When Tom was three a nearly fatal attack of diphtheria leaves Tom an invalid for almost two years, during which time he relies heavily on the life of the imagination, fueled by the attentions of his mother, grandmother, sister, and Ozzie.

Don't use plagiarized sources. Get your custom essay on
“ An Analysis of The Night of the Iguana by Tennessee Williams ”
Get custom paper
NEW! smart matching with writer

Ozzie is a black nursemaid and teller of supernatural tales, who lives with family until Tom is six. (Leverich 72)

At the age of eleven, Toms mother buys him a second-hand typewriter. He begins writing stories as a compensation for his discovery of snobbery in middle

American life. When he was fifteen he won five dollars for his entry in an essay contest, Can a Good Wife be a Good Sport? The next month he wins ten dollar from Loews State Theatre in St.

Louis for the best review of the movie Stella Dallas. In that same year he writes The Vengeance of Nitocris his fist published story, for which he is paid thirty-five dollars. (Spoto 44-52)

In his junior year in college he fails ROTC, and his father refuse to allow him to return there that fall. From years 1931 till 1935 he works daytime in the Continental Shoemakers branch of International Shoe Company for sixty-five dollars a month, and he spends his nights writing stories. (Spoto 62-67)

In the summer of 1935 the garden players of the Rose Arbor Theater in Memphis produce his play, Cairo! Shanghai! Bombay! In 1937 he entered University of lowa and graduated the following year. In 1939 he changes his name to Tennessee on The field of Blue Children. Months later he was awarded $1,000 Rockefeller grant, and he begins to write full-length plays. (Leverich 200-203)

From 1943 Tennessee Williams spends most of his time writing full lengths plays. His award winning play Battle of Angles won a thousand dollars from the National Institute of Arts Letters. One of his major works The Glass Menagerie opens in theatre in 1944, and 1945 in New York and wins New York critics award.

In 1947 his other famous work A streetcar named desire opens in New York, and wins second New York Critics Circle Award and Pulitzer Prize. In 1955 Cat on the hot tin roof wins his third Critics Circle award and second Pulitzer Prize. For the next thirty years Tennessee Williams wrote numerous works and plays. In 1982 at age of seventy-one he receives an honorary degree from Harvard University. (Falk 25-33)

In most of Tennessees works, his writing usually surrounds the themes of sex, violence, and the exploration of desire. These themes are presented in almost all his works and some of his well known work are the plays You touched me, a streetcar named desire, the rose tattoo, cat on a hot tin roof, and the night of the iguana. Tennessees works are always related to these topics because he has the talent in creating the mood and putting his feelings of these themes into words. (Faulk 36-40)

In his most important play The glass menagerie is a direct parallel to his life. It is this play that took him out of poverty and gains him fame. Toms sister Rose had mental breakdown, and for years he cannot overcome his sense of entrapment, he fashioned great drama and transform Rose into fragile Laura, and his mother Edwina into Amanda Wingfield, in his first great work The glass Menagerie. (Bloom 85)

The night of the iguana began as a short story in 1948. Over thirteen years it evolved to a fulllength play. In 1960 it was presented in Italy as a one-act play. December 28, 1961, The night of the iguana opened in New York, this important play is directed Frank Corsaro and Starred Bette Davis as Maxine, Patrick ONeal as Shannon, and Margaret Leighton as Hannah Jelkes directed. This play was now regarded as the last one of Williams work that made much sense (New York Daily News 1961) and as one containing elements that anticipated the stylized, unreasonable plays to come. (Londre 157)

Looking back to 1962, it is possible to confirm that the night of the Iguana marked a turning point in Williams work. This play was written in a period of spiritual exhaustion, and it seemed to be a mellow, reflective summation of many of his own mixed feelings and attitudes. It even seemed possible that the absence in this play of Williams characteristic concern with violence might adumbrate a new direction in his work. When he wrote this play he has not completely abandoned the subject of violence, but he has tended to use a looser dramatic construction. (Williams 985)

The action occurs on the verandah of the Costa Verde hotel, which is built in a tropical rain forest on a hilltop above the beach near Puerto Barrio, Mexico. It is the summer of 1940. Maxine Faulk, the proprietress. Reverend Shannon is old friend of Maxine; he has been conducting a Mexican tour for a busload of schoolteachers. He decides to stay at Costa Verde, hoping that the ladies would enjoy the environment. Hannah Jelkes comes with her ninety-seven years old grandfather.

They are hoping to stay since they have used up all their money. Her grandfather Nonno is a poet; hes an important symbol since he recites appropriate poems at the right moments. Shannon is a minister of a Church and he was caught having sex with a girl under age of eighteen. (William 370-400)

Shannon is in a bad situation, in the mean time Maxine wants Shannon to take place of her husband who died weeks ago. When Hannah first meet Shannon she liked him the moment she saw him, but Maxine threatens to throw her and her grandfather out if Hannah tries to gets her hands on Shannon and since they dont have any money she have to obey.

When Maxine is working, Hannah wants Shannon to know that she wants to help him. Since Shannon is in such a bad position, he has no family or friends that truly love and cares about him. In the end Hannah realized that Shannon dont understand her because he has not been helped in years. At the same time Nonno dictates to Hannah his loveliest poem, Without a cry, without a prayer, with no betrayal of despair then the next moment Hannah discovers her grandfather has stopped breathing.

The major theme of the whole play is restated in the conversation between Hannah and Shannon, Hannah: To meet someone who can light a match in the wind? Has it been so long since anyone has wanted to help you, or have you just. Just been so much involved with a struggle with yourself that you havent noticed when people wanted to help you, but sometime they do see and know.

What Hannah is saying is that sometimes people are so caught up in life they dont see who really wants to help them, shes trying to tell Shannon that shes the person trying to help him. William notes in the stage direction that the storm with its white convulsions of light, it is like a giant white bird attacking the hilltop of the Costa Verde. This signifies the turning point of the play.

One very important irony of the play is that in the hotel that belongs to Maxine Faulk, rooms are called cubicles. The solution that is found in the play for living beyond despair is to make human contact, to come out of ones separate cubicle. The theme of the play is come out and experience compassion for other human beings, based upon acceptance.

My reaction to his play is that so many things surrounds people that we dont see who really wants to help, and we should always beware of things in life. We have to appreciate moments that we are being cared and helped, once that moment is gone one might never see it again.

In January of 1983, Tennessee visits Jane Smith in New York, returns to Key West, then goes to New Orleans to arrange the sale of his townhouse. Flies to Taormina in February for a final brief visit before returning to New York. Dies on February 24, 1983. The cause of death may have been the result of an overdose of Second or from asphyxia caused by choking on a plastic cap of the type used on bottles of nasal spray. Funeral services are held at the St. Louis Cathedral on March 5. Williams is buried next to his mother in the Calvary Cemetery in St. Louis. (Spoto 355)

An Analysis of The Night of the Iguana by Tennessee Williams. (2021, Oct 05). Retrieved from https://studymoose.com/an-analysis-of-the-night-of-the-iguana-by-tennessee-williams-essay 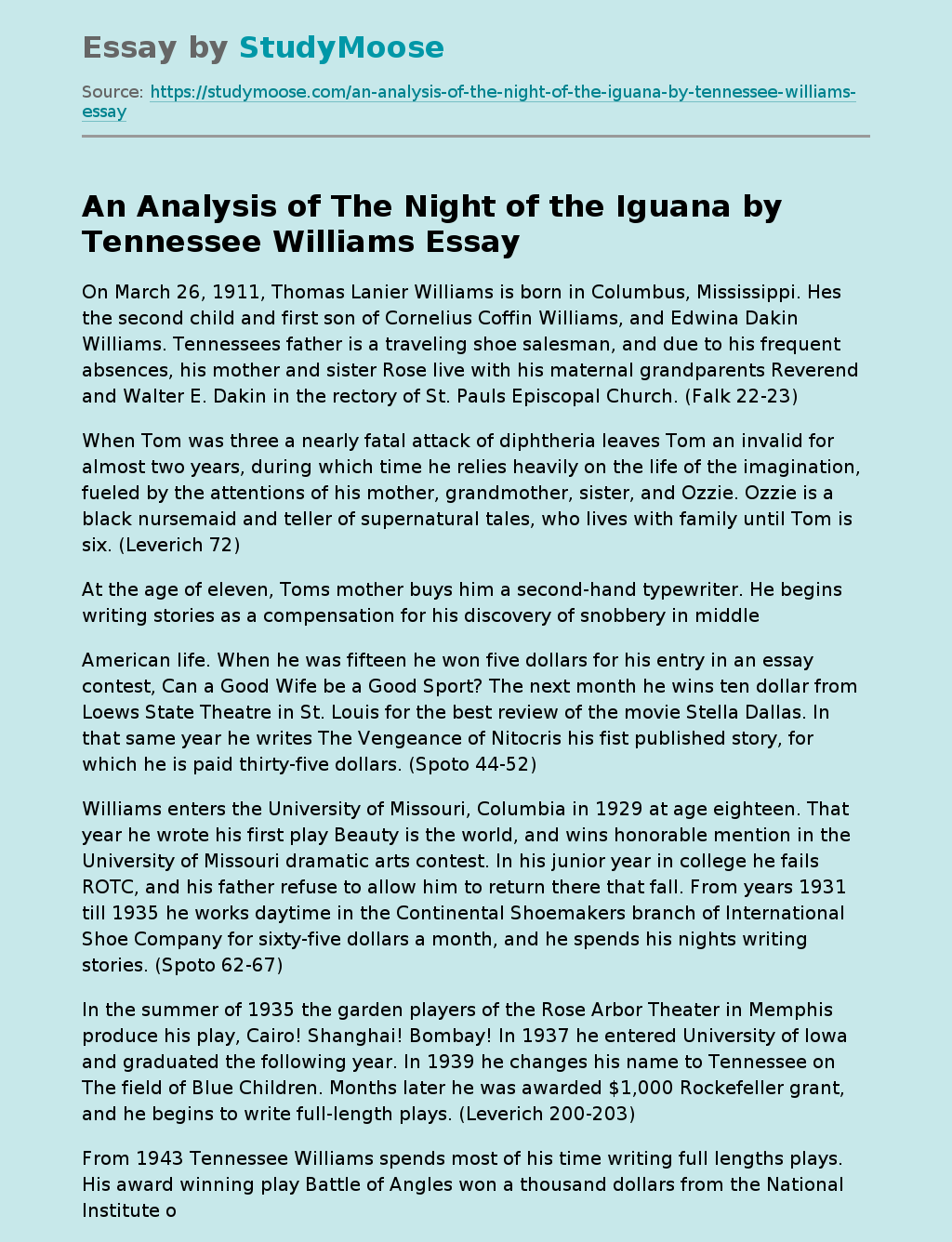