An analysis of the Maya Angelou poem "To a man"

‘To a man’ is written by Maya Angelou, whose first novel was an autobiography of her varied life, (activist, singer, waitress, dancer etc.) called ‘I know why the caged bird sings’. She has written two collections of prose, ‘Wouldn’t take nothing for my journey now’ and ‘Even the stars look lonesome’. Angelou has written several famous poems, including ‘Still I rise’ and ‘On the pulse of the morning’ for the inaugeration of President Clinton. Maya Angelou now has a lifetime appointment as Professor of American Studies at Wake Forest University of North Carolina.

Don't use plagiarized sources. Get your custom essay on
“ An analysis of the Maya Angelou poem “To a man” ”
Get custom paper
NEW! smart matching with writer

The poem is about the man that Maya Angelou loves, and she uses a variety of metaphors and images to describe him to the reader. Maya Angelou has a very decisive style of writing and uses lots of modal verbs such as ‘is’ to convey her message to the reader. She writes poems to entertain people, and to be read aloud. I think this one is one of those poems because she uses full stops and capital letters to show when pauses should be given and which words need particular emphasis.

Proficient in: Mans Search For Meaning

This poem is serious, and thought provoking, and she uses unusual imagery to compare her man to. I like the style she uses to give meaning to her words, and how she uses punctuation and enjambement together which gives an interesting effect. The mood is quite happy, as she describes her man, who makes her feel warm and laughs through his own troubles.

The poem does not follow conventional structure, or use syllabic sentencing on each line.

The lines do not rhyme, and it is like Angelou has just written down her thoughts, without purposefully making them into a piece of poetry. The poem is twenty two lines long, and puts important ideas about the man on their own , or on a separate line to show the reader how important this aspect of the man is. ‘To a man’ is written from Maya Angelou’s own experience, and was about her first husband. It describes his personality, and likens him to a big cat. Angelou uses metaphors such as ‘My man is Black Golden Amber’ to begin the poem. The first line ‘My man is’ sets the scene and tells the reader that the poem is about the man Angelou loves. The word ‘My’, indicates possessiveness, unlike the title which is ‘to a man’, this could be any man. It is unsure why she writes to any man, not her own, but possibly it is to tell them how great her man is and that she doesn’t need anyone else. The word ‘Black’ could be in reference to the skin colour of the man, or his personality, which could be evil, or depressed. I think it means ‘evil’ because of the later imagery used in the poem. ‘Golden’ implies that he is special, and precious as gold, as does the next word ‘Amber’ which is also a precious stone. The word ‘Amber’ gives the idea of warm colours, reds and oranges, which link in to the rest of the poem.

The next line is simply, ‘Changing’ which means her man is constantly changing from Black to Golden to Amber, his personalities change. ‘Warm mouths of Brandy Fine’ I think this means that kissing him is like drinking brandy, and makes her warm which ties in with the warm amber colours used earlier. ‘Cautious sunlight on a patterned rug’ means that maybe her man is cautious sunlight, which links to the imagery of golden. Possibly Angelou thinks of herself as the rug, and he cautiously lights her up, and makes her warm again. The next line indicates that the man smiles through his troubles, ‘coughing laughter’ and that he has a particular smell, of ‘French tobacco’. ‘Graceful turns on woollen stilts’ shows that her man can not only walk on stilts made of wool, i.e.) do the impossible but also, turn on them gracefully, and make the impossibilities of life seem easy to her. The following line is simply ‘Secretive?’, Angelou is asking herself a question about the man, is he secretive?, and then answers in the next line, ‘A cat’s eye’. I think that this indicates that he has depths and mystery like the cat’s eyes which swirl with hidden colours.

He is not secretive, just has many layers that cannot be unravelled all at once. Cat’s eyes are golden and change colour with the light, which links in to the idea of the man’s temperament, also ever changing. ‘Southern’ is in it’s own sentence at the beginning of the next line which could show that her man is from the South , possibly American, like Angelou herself. The next sentence says he is ‘plump and tender, with navy-bean sullenness’, navy is traditionally a very masculine colour which could mean he is a very macho man. The next line re emphasises how tender the man is, it says simply , ‘The gentleness’. The fact that Angelou doesn’t use a lot of words to describe the gentleness suggests to me how gentle he is, she cannot use words to describe it, it is just there, which is in direct contrast from the sullen man who likes navy blue. This again gives the impression of an ever changing personality. The next line mentions a cat again, ‘A big cat stalks through stubborn bush’. This imagery has an air of menace about it, the cat using it’s gentleness to stalk, capture and kill it’s prey, a cat is graceful, and light but also can be deadly.

This adds an air of danger to the man, is he as sweet as he first appears?. Angelou now asks if she mentioned amber, which links back to the start of the poem, and gives the reader the red, gold imagery again, and an idea of the warmth Angelou feels with her man. She likens amber to a ‘heatless fire, consuming itself’, which (as in other Maya Angelou) poetry gives the image of a cycle, forever consuming itself. Possibly the heatless fire is what she sees in her man’s eyes. The next line says ‘Again.Anew. Into ever neverlessness’ which shows the cycle again, and also could portray the image of a cat’s eye and the way the colours in that change. ‘My man is Amber’, this is a repetition of the first phrase, Angelou uses a definite metaphor to compare her man to Amer. She then repeats her third line, ‘Changing’, which again shows the way his colours change like Amber. The next line is ‘Always into itself’ , which could be acting as a metaphor for their love, which also changes but remains the same.

This is further shown in the last lines, ‘New.Now.New’ and ‘Still itself’. The poem ends with the word ‘Still” on a line o it’s own, with a full stop, this shows that their love is still, and the way he feels for her, unlike the colours doesn’t swirl and changed and is still. I think that Maya Angelou wrote the poem to describe the way her husband made her feel, and to keep a part of that feeling with her, for posterity. She writes to any man to let them know what she has, and to convey her deep love for this particular man. Another reason for her to write the poem is to try to make sense of the way her man acts, and the way his moods change.

I think that Maya Angelou wrote this to show the complex emotions she feels about her man, possession, tenderness, love, and warmth all at once. The poem’s effect on me was that it showed me the way a woman felt about her man, and it helped me understand the deeper emotions of a relationship. I liked the way she used Amber to show how her man changed, because it wasn’t in a negative way, the Amber gave an impression of how precious he was, yet she changed her perspective with him. ‘To a man’ made me think about the images and metaphors used, and I enjoyed analysing it because now, I enjoy it more, knowing how Angelou felt when she wrote it.

An analysis of the Maya Angelou poem "To a man". (2016, Jun 22). Retrieved from https://studymoose.com/an-analysis-of-the-maya-angelou-poem-to-a-man-essay 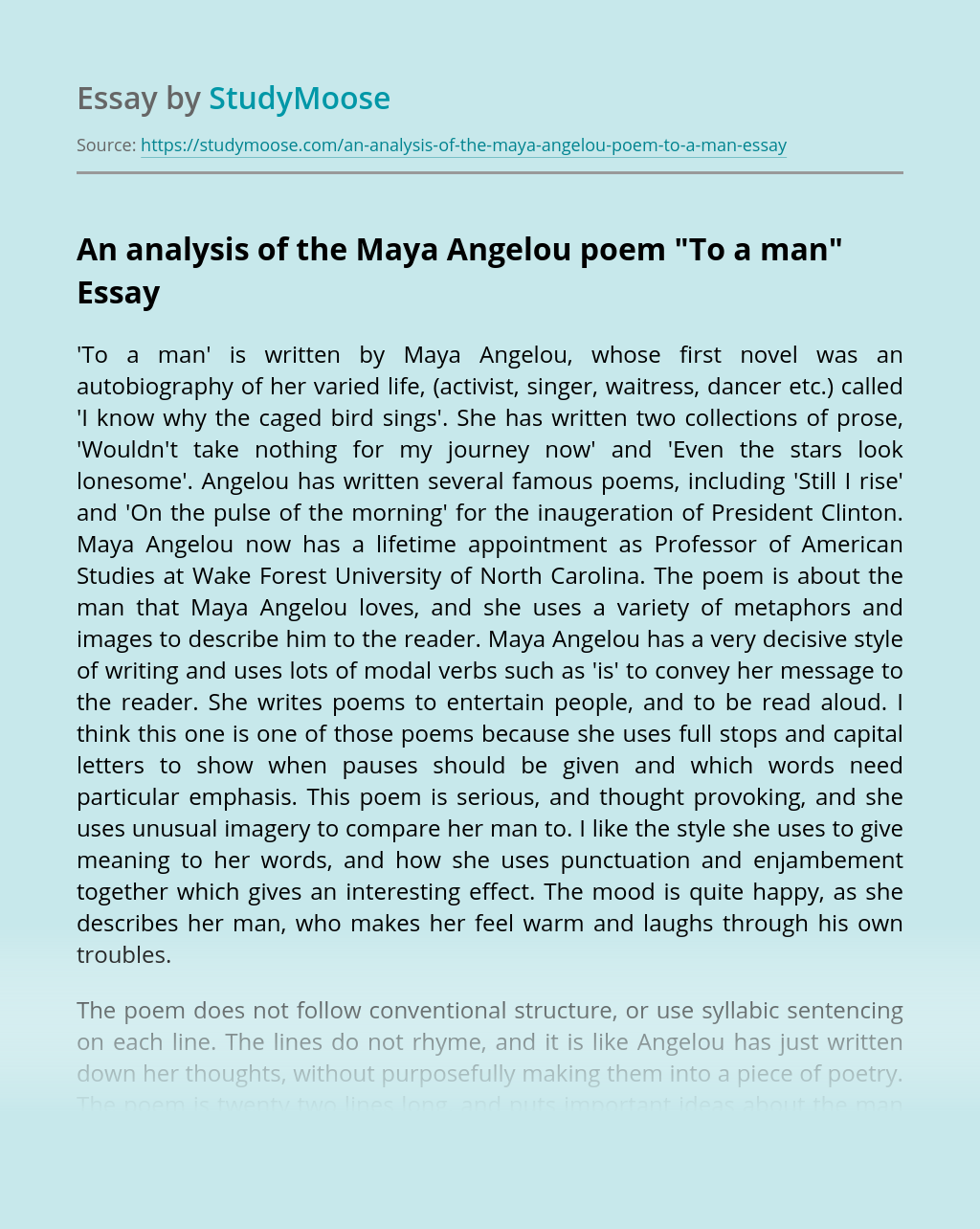