An Analysis of Mersault's Character in The Stranger by Albert Camus

“You will never be happy if you continue to search for what happiness consists of. You will never live if you are looking for the meaning of life” – Albert Camus

Throughout his life Albert believed the world is absurd, without purpose, and leading only onto death. Sunday through Saturday people go through the same motions, repeating the same lives until one day the question of why overcomes us. This causes many in the world to search for an explanation of life.

Don't use plagiarized sources. Get your custom essay on
“ An Analysis of Mersault’s Character in The Stranger by Albert Camus ”
Get custom paper
NEW! smart matching with writer

The Absurd refers to this pointless quest for meaning in a universe devoid of purpose. Camus came to the conclusion that there is nothing beyond this world, and we are simply thrown into this existence with the only outcome being death, “since we are all going to die it is obvious the when and how don’t matter” (114). Coming to terms with the Absurd is what accounts for the ‘strangeness’ experienced by every human being with the world. Thus, the feeling of absurdity is the separation between man and his life.

It is this theory of absurdity that Camus successfully elaborates in his novel The Stranger. The novel itself is split into two parts, the first being more of an introduction than the second. It presents the main character Mersault and follows him as he unwittingly gets drawn into a murder while visiting an Algerian beach with his friend Raymond. The second part consists of Mersault’s trial and the days leading up to his gruesome execution at the guillotine.

A large part of the novel deals with Mersault becoming a stranger in his life. I believe that Camus effectively reveals this aspect of absurdity through the character development of Mersault, point of view in the first person, and a motif of heat. In the end Camus brings each of these stylistic devices together to bring out the main idea of his philosophy of the meaningless world that we live in.

In the development of Mersault’s character, Camus is able to show how Mersault begins to feel and come to terms with Absurdity. One major attribute of Mersault is his determination not to lie. He says what he is, he refuses to hide his feelings and immediately society feels threatened. During his trial, Mersault’s lawyer asks Mersault to say that he feels remorse for what he did but Mersault refuses simply because those were not his feelings. Mersault’s refusal to lie allows the reader to see his natural desire for the truth. In the beginning of the novel Mersault goes to his mother’s funeral. While there, he does not cry or show any sign of sorrow. These actions are later used against him in court as the prosecution exploits Mersault as an insensitive, hateful criminal. In reality Mersault is not vile, he just does not adhere to the normal standard of human behavior. He has not set out on a quest to find out why his mother died, he simply accepts it. It occurs to him that “one more Sunday [is] over, that Maman [is] buried now, that [he is] going back to work, and that, really, nothing [has] changed” (24). It is here that Camus reveals Mersault’s relationship to the idea of an absurd world. Mersault’s indifference contrasts with other people’s tendency to express more than what one feels for the sake of what is proper. In a sense Mersault becomes a ‘stranger’ to the world. Through this the reader begins to recognize Mersault’s feeling of absurdity, as Camus would call it. Mersault has become Camus’ tool for displaying the evolution of a man as he begins to realize that life has no purpose. Through Mersault’s character Camus is giving the reader something to connect the ideas of the Absurd with. They can easily see Mersault’s separation from his life and can see how it is a reflection of the meaningless actions of all human beings.

By employing first person point of view, Camus makes it easier to understand Mersault’s separation and his gradual understanding about life. In the novel, Mersault is the one telling the story. He explains that he feels no remorse for his mother’s death, that he does not love Marie, and that he is not a best friend of Raymond. There are many great advantages to Mersault being the one explaining. It allows the reader to fully see Mersault’s indifference and his development at he comes to terms with the Absurd. At one point during his trial, Mersault comments “everything is happening without my participation. My fate is being decided without anyone so much as asking my opinion” (98). Through Mersault stressing his detachment, the idea of him being a stranger and living on the fringe of society is emphasized. By now Mersault begins to look back on memories and to feel a desire for his old life. Through using first person point of view, Camus allows the reader to get inside Mersault’s head and see these changes. During Mersault’s last days in prison, the reader can understand his new outlook on life as he faces his execution. Camus is able to bring closure to his philosophy of absurdity by using Mersault’s thought process as he contemplates over life.

Another way that Camus elaborates on the notion of the absurd is through a motif of heat. Throughout the novel, Mersault refers to the presence of heat and its unbearable qualities. This repetition emphasizes the idea of Mersault being isolated, and indifferent. Mersault refers to the “sun bearing down, making the whole landscape shimmer with heat, it was inhuman and oppressive” (15). Later on, while at the beach he describes his forehead as “swelling under the sun” (57). Yet again this image of heat shows up during the murder trial as it begins “with the sun glaring outside” (82). These images signify the pressure society placed on Mersault. For example, during his mother’s funeral, Mersault would of rather taken a nice walk along the trees instead of the punishing journey under the sun. Society would have condemned him though if he had not participated in his mother’s funeral. At the beach, Mersault felt no hate towards the Arab that Raymond despised yet in the scorching heat he thought nothing of murdering someone for a friend. The trial, deciding Mersault’s future, also placed considerable amounts of pressure on him. Each of these instances where heat played a role, the reader can feel Mersault’s separation from his life. It represents the little control he has over his life. The heat enhances these moments when Mersault’s passion to break free is at it’s greatest. Camus’ development of the motif is effective in relaying Mersault’s separation.

Camus’ use of character, point of view and motif are excellent ways to elaborate on the notion of the Absurd. Not only do they assist in communicating the separation between man and life in the absurd world they help bring out the overall idea that life in this world has no defined purpose. Camus is able to bring his ideas together in a well written fashion and play out his ideas described in his book of philosophical essays, Le Mythe de Sisyphe. In looking at Camus’ purpose to elaborate the notion of the Absurd it is obvious that through his style he has gone beyond what he wanted and created a novel that captures the idea of the Absurd but also allows much room for interpretation and the formation of new ideas. Those who are interested in novels that open a whole new perspective on life should make an attempt to read The Stranger. It is well written and contains many interesting insights. Other novels of the same style include The Trial by Franz Kafka and Nausea by Sartre.

An Analysis of Mersault's Character in The Stranger by Albert Camus. (2021, Sep 14). Retrieved from https://studymoose.com/an-analysis-of-mersault-s-character-in-the-stranger-by-albert-camus-essay 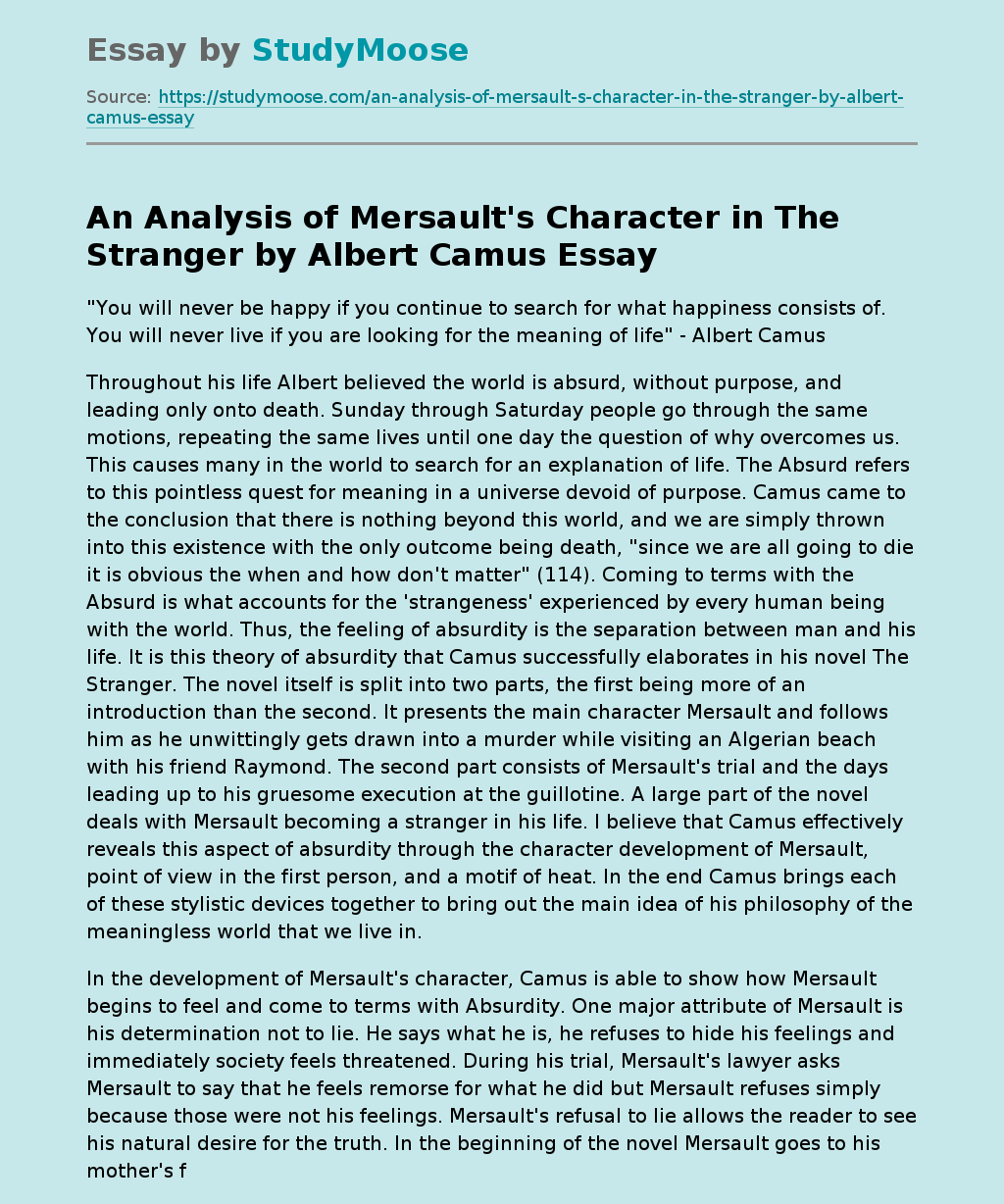