An Analysis of Fitzgerald's The Great Gatsby

The Great Gatsby, written in 1925 by Francis Scott Key Fitzgerald. It has been considered a classic for his symbolism and themes. It is heavily centered on social classes, social constructs, and the American dream. It is a story of undying hope and love for another. That ends in tragedy. Many people consider The Great Gatsby to be a must read for high school students.

James Gatz, better known as Jay Gatsby, grew up in North Dakota, to Henry Gatz. Jay Gatsby is a hopeless romantic who held out his hope for Daisy for years, and through many struggles.

Don't use plagiarized sources. Get your custom essay on
“ An Analysis of Fitzgerald’s The Great Gatsby ”
Get custom paper
NEW! smart matching with writer

Gatsby tried to return from war just to be with Daisy and he spent all the money he had trying to find her. This is what Nick meant when he said “it was an extraordinary gift for hope, a romantic readiness such as I have never found in another person.”  This hope is what caused Gatsby to get rich by helping organized crime.

This hope is what led him to New York, led him to buying a house, and incentivized him to throw extravagant parties. All in the hope of attracting Daisy’s attention. Gatsby eventually resorted to asking Nick for help to achieve. After all these years his hope was finally within reach. Only to be ripped away again by an unfortunate accident, and killed the next day. Gatsby is represented by green, black, brown, purple, and gold. Green for his hope, black for his mysterious life and eventual death, brown for the poverty he lived in, purple for wealth, and gold for the extravagance of his actions.

Meyer Wolfsheim is a Jewish, middle aged man. He is also a prominent member in organized crime and a business partner with Gatsby. Meyer helped Gatsby make his fortune when Gatsby returned from the war and ended up penniless. Meyer did not do this out of the kindness of his heart however. He merely used Gatsby to make more “gonnegtions”. We can tell that Meyer has Gatsby find new people because of the interaction when Nick first meets Meyer, Meyer says to Nick “I understand you’re looking for a business gonnegtion.” Only for Gatsby to answer “Oh, no, this isn’t the man.” . Meyer likely doesn’t care much for Gatsby, supported by the fact he doesn’t attend Gatsby’s funeral. I would say he most closely represents the negative side of green, being greedy and money-driven.

Tom Buchanan, an old money, ex-sports player. He has a short temper, he’s prone to violence, rather arrogant, a frequent liar, an alcoholic, a racist, and a cheater to boot. Tom is almost the exact representation of a corrupt aristocrat. His obscene wealth and horrible character traits making him one of the least ideal people to be around. However, Daisy was unlucky enough to marry him. Tom goes on to run around with other women, one of which being Myrtle. Whose nose gets broken in an argument with Tom. Everyone around Tom is likely to be hurt by him. I would assign purple and red. For his arrogance, wealth, and temper.

Daisy Buchanan, wife to Tom, cousin to Nick, and an old acquaintance to Gatsby. Daisy doesn’t care about anyone around her. She doesn’t care for her daughter, having her raised by a nurse. She doesn’t care for Tom, she even went and cheated on him. Nor does she care for Gatsby, she didn’t even bother to send a flower to his funeral. There is the possibility that Tom prevented her from sending a flower. However I find this unlikely because she went so far as to cheat on Tom in the first place. If she cared enough she would have taken the risk to send flowers. I would give Daisy black for her evil ways.

Jordan Baker is a friend of Daisy’s and eventual girlfriend of Nick’s. She’s also a competitive golfer and independent woman. Representing the change in women that happened around the 1920’s. Brought about by the ability to vote and find their own work. Jordan is also careless, reckless, and self-centered. She drives terribly but doesn’t fear and accident because it takes two to make an accident. After the death of Gatsby and she talks to Nick again she appears to no longer care, claiming to be engaged to another man. I would give Jordan orange, for her fiery new woman spirit.

Nick Carraway is the narrator of The Great Gatsby. He was a soldier in WWI, graduated from Yale, and them moved to New York to become a bond man. Nick tends to reserve his judgement until after everything is said and done. He describes himself as the most honest person he knows. Which seems quite true given the crowd he socializes with. Nick, like Gatsby, grew up in the West. Which is to say, an entirely different world than the East. Which is probably the source of his different values. He becomes friends with most of the other characters mentioned in the book. Nick also seems like he is the most saddened by Gatsby’s death, other than Gatsby’s father. I would assign blue to Nick, not only for the sadness he feels at the death of his friend, but also for the loyalty and wisdom he shows throughout the book.

George Wilson is the owner of a gas station in an area known as the Valley of Ashes. He has stuck up a business deal with Tom. To buy Tom’s car and resell it for a profit. George became sick when he learned Myrtle cheated on him and devastated when he learned Myrtle was killed. Becoming a husk of a man he was days before. He became obsessed to the point of murder for the death of his wife, killing Gatsby because he believed he was the perpetrator. Unfortunately, he killed the wrong person in the end as Daisy was the one who was driving, not Gatsby. I would assign blue to George, for the crushing sadness he felt.

Myrtle Wilson, George’s wife, and Tom’s mistress. She is a victim of Tom’s violence. Getting her nose broken just by saying Daisy’s name. She seems to be unable to stand being married to George, backed up by the quote “Neither of them can stand the person they’re married to.”  Tom can’t stand being married to Daisy and Myrtle can’t stand being married to George. Myrtle was misled by Tom to believe that Daisy was a Catholic and therefore against divorce. Myrtle tried to flag down the car that hit her because she believed Tom was in it. So she likely spent her last few moments believing Tom had just killed her. Myrtle represents green and red to me. Green for the greed of yearning to marry Tom and red for the anger she felt towards Daisy.

In the end, most of these characters suffered at the hands of the others. This can be due to their harmful and dishonest nature. Or to the unfriendly society of the upper class. Or any other culmination of the negative aspects of society associated with the upper class. What may just be the worst part of this tragedy is that it is entirely avoidable. If they were only more honest or less old fashioned more characters would probably have ended up happy.

An Analysis of Fitzgerald's The Great Gatsby. (2021, Apr 23). Retrieved from https://studymoose.com/an-analysis-of-fitzgerald-s-the-great-gatsby-essay 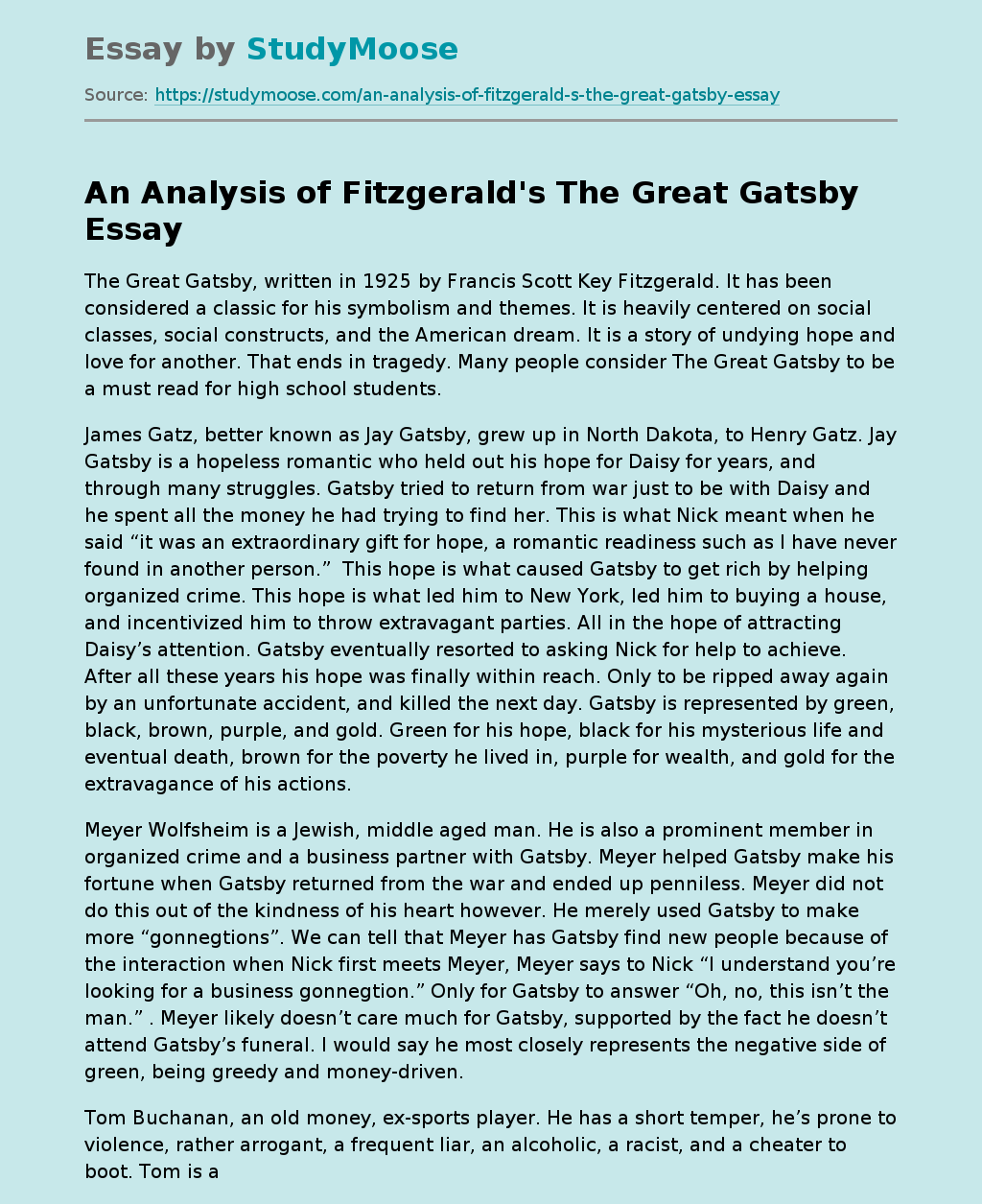