An Analysis of Biblical Illusions in Cry the Beloved Country, a Novel by Alan Paton

Biblical Allusions and Cry the Beloved Country In times of guilt, everyone wishes they could rewind their lives and get rid of their wrongdoings. The story of the woman at the well portrays Jesus’ teachings that rewinding and starting over is possible. “The Sins of the Samaritan Woman” tells the story of a Samaritan woman shunned by her community for having five husbands and yet living with another man. One day when she went to draw water from a well, she found Jesus waiting there.

Don't use plagiarized sources. Get your custom essay on
“ An Analysis of Biblical Illusions in Cry the Beloved Country, a Novel by Alan Paton ”
Get custom paper
NEW! smart matching with writer

He asked her for water, breaking three Jewish customs: talking to a woman, coming in contact with a Samaritan, and asking for water.

The woman wondered why Jesus would ask such a favor of her, so he explained that even though he knew about her sinful life, if she asked him for living water, referring to an eternal life in Heaven, she would be forgiven and saved. Alan Paton’s reference to this biblical story “The Sins of the Samaritan Woman” adds meaning and significance to Cry, the Beloved Country, highlighting the lesson that despite the number of sins a person commits in their lifetime, they can still be forgiven if they repent and begin lead a better life.

The number of sins someone commits does not hold them back from living a better life if they repent for those sins and ask to be forgiven. Stephen Kumalo, a priest, learns of news that his sister Gertrude, “makes and sells” liquor, “has been in prison” more than once, and “[sleeps] with any man for their price” (Paton 53).

Gertrude had left her family with the purpose of finding her husband but ended up living in Johannesburg deep in prostitution, the selling of alcohol, and arrest. These sins that she committed parallel the Samaritan woman; they both were prostitutes and looked down on by their communities. Later on, after Gertrude had been found by Kumalo, she suggested that she “should become a nun” if she could find someone to “care for [her son)” (Paton 228). The influence of her brother, the priest, changed her thoughts regarding where her life was taking her. She decided to leave her sinful, corrupt life as a careless prostitute and live as a nun who was pure and cared about her future. This transformation parallels how the Samaritan woman was saved from her sinful life by the living water from Jesus Christ just as Gertrude was saved from her sinful life of a prostitute. Gertrude’s dramatic turnaround from the life of a prostitute to that of a nun demonstrates how the repentance of a sinful life can lead to forgiveness and a clean slate: the start of a brighter future.

An Analysis of Biblical Illusions in Cry the Beloved Country, a Novel by Alan Paton. (2021, Dec 13). Retrieved from http://studymoose.com/an-analysis-of-biblical-illusions-in-cry-the-beloved-country-a-novel-by-alan-paton-essay 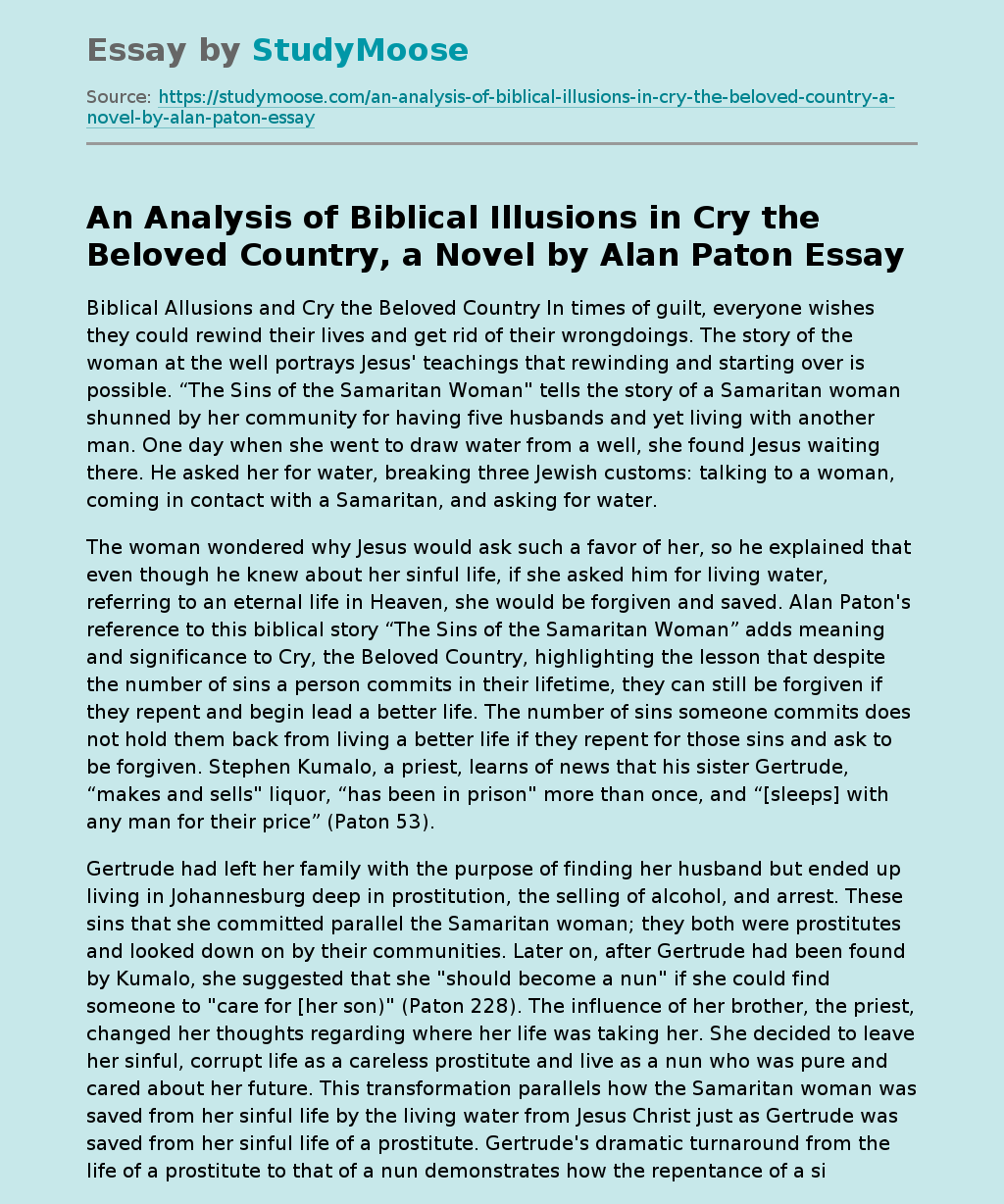