An Analysis of Ann Petry's "Like a Winding Sheet"

There have been countless studies to that show Stress, Frustration and Anger are related. In Ann Petry short story “Like a Winding Sheet” you can observer this relationship. First, let us study the title “Like a Winding Sheet” the words Winding Sheet means “shroud”, this indicate the characters of the story could have a shroud hanging oven him? The story is told in a third person point of view it takes place in the Ghetto’s of Harlem. As you start reading the story, you can see right away Johnson and his wife Mae seem to be a happy black couple.

Turn in your highest-quality paper
Get a qualified writer to help you with
“ An Analysis of Ann Petry’s “Like a Winding Sheet” ”
Get high-quality paper
NEW! AI matching with writer

He tries to get up before his wife Mae, and he wants to “surprise her by fixing breakfast” (1).

This divulges a romantic side of Johnson to the reader however, instead of getting up he goes back to sleep because, he has worked ten hours at night and his legs are sore. Another sign of Johnson’s love for Mae is when they were arguing about being late for work and “he couldn’t bring himself to talk to her roughly or threaten to strike her like a lot of men might have done” (59).

Although, this appears from the outward appearance to be a normal relationship it’s hard to ignore the inward emotion that Johnson has been keeping bottled up. Was this the beginning of Johnson’s Stress, Frustration, and Anger?

As the story moves on Johnson arrive to work late as always, he see the forelady, a white woman who is upset about something.

He avoids looking at her, but she stops him anyway. He greets her “good evening; Mrs. Scott’ (91) and waits for her reaction. The forelady refers to the time and tells him that “he is late again” (92). Johnson explains to her that his legs are giving him trouble. Then suddenly she makes a remark that’s bring out Johnson anger “Every guy comes in here late always has an excuse” (100) “and niggers are the worse” (102). She also points out that she is “sick of niggers” (104) which is definitely, in today society considered a racial statement. This along with the fact that it was coming from the mouth of a white woman was more than Johnson was prepared to handle. But, he reframes from hitting her because she is a woman. Was this the beginning of Johnson’s Stress, Frustration, and Anger?

Work is finally over and Johnson’s anger has subsided. However, this doesn’t last long. As Johnson makes his way home he sees a line of people being service coffee at an urn. He stops to get some when the white girl who is serving the coffee refuses to give Johnson a cup and he assumes it is because he is black but in really it was because the young lady had to make more. Just the thought of not being serviced the coffee because, he was black made him furious and makes him want to “hit her so hard that the scarlet lipstick on her mouth would smear and spread over her nose, her chin” (253). But, as with the forelady he reframes from hitting her because she is a woman. Was this the beginning of Johnson’s Stress, Frustration, and Anger?

Johnson makes home from work and starts arguing with his wife. She says that he is “nothing but a hungry nigger who is trying at act tough” (312).This pushes Johnson over the edge his anger and frustration take over. He finds his hands on this wife face not realizing that he was taking all his anger and frustration on the one he loves. You may ask why Johnson didn’t hit the forelady when she calls him a nigger, and why did he control his anger when the waitress refuse to give him a cup of coffee, and more important why did he lose it when his WIFE called him a” hungry nigger”. As the reader of this story I came up with two answers to these questions: one is if a black man lost control on a white woman his life would be worthless and black on black violence was acceptable. My second reason is as human being we have the tendency to take all of our frustrations and anger out on the ones that we love hoping that they will understand and will forgives us.

An Analysis of Ann Petry's "Like a Winding Sheet". (2016, Jun 20). Retrieved from https://studymoose.com/an-analysis-of-ann-petrys-like-a-winding-sheet-essay 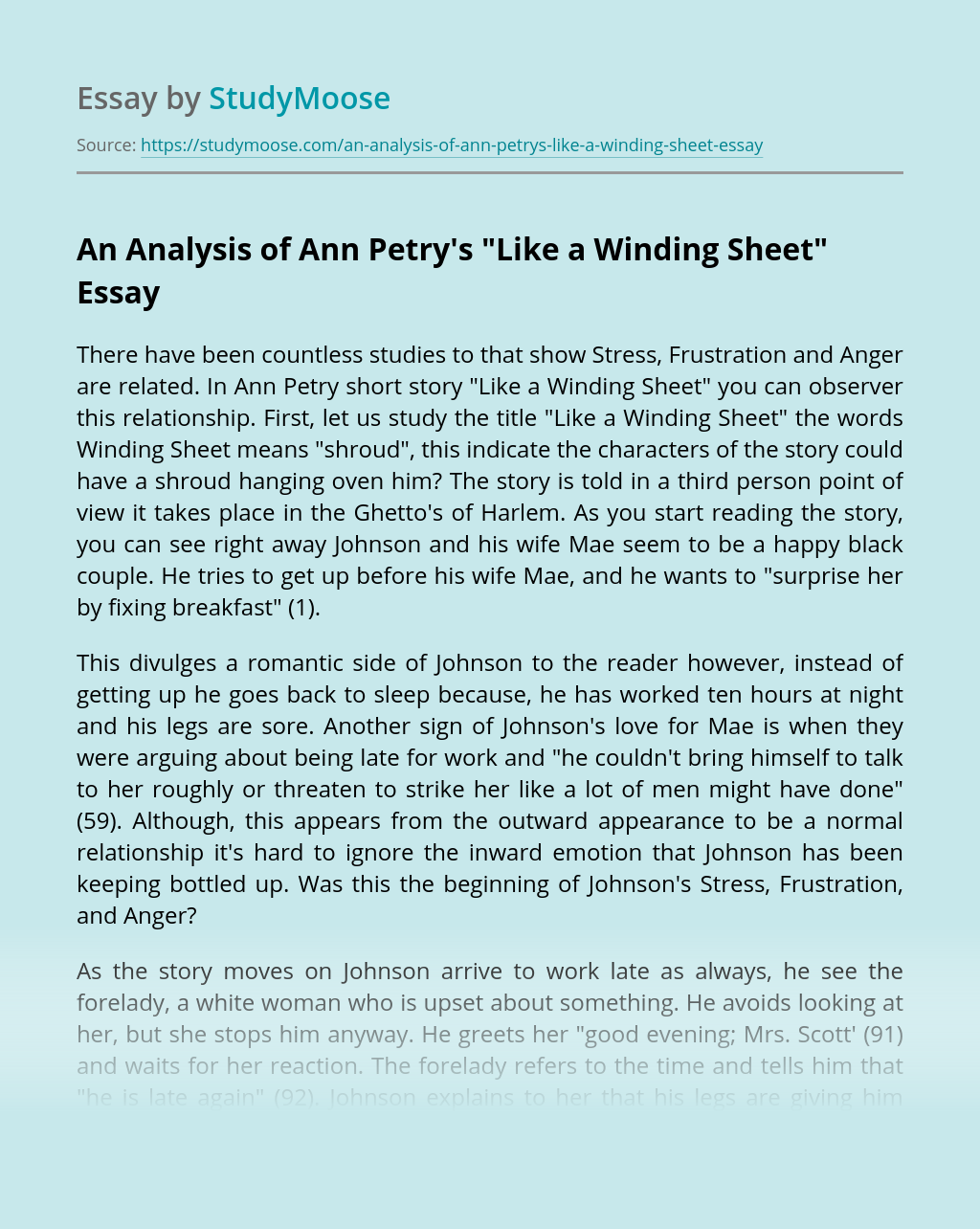 Turn in your highest-quality paper
Get a qualified writer to help you with
“ An Analysis of Ann Petry’s “Like a Winding Sheet” ”
Get high-quality paper
Helping students since 2015
Stay Safe, Stay Original