In this case, Froddo has found a golden ring during a journey to Modor. Froddo took the golden ring as he knew the ring was belonged to Gandalf. Literally, Froddo did not aware about the advertisement that Gandalf advertised earlier that he has offered RM5000 for reward to those who found the ring. In this case, Froddo can claim the reward from Gandalf although there was no consideration been made between Gandalf and Froddo. A common definition of consideration is in terms of the price of a promise is what one party must “pay” (not necessarily in financial terms) for promise of other party such that promise becomes legally binding.

Don't use plagiarized sources. Get your custom essay on
“ An Agreement to Compensate for a Past Voluntary Act Section 26(b) ”
Get custom paper
NEW! smart matching with writer

As stated in law which is An Agreement to Compensate for a Past Voluntary Act Section 26 (b), under this exception, the promisor promised to give the promisee something because the promisee has done something voluntarily before the promise was made.

When this happens, the promise made by the promisor is valid although there was no consideration on the promisee’s part. In the event that the promisor did not do what he has promised, the promisee can sue him for breach of promise. This means, the promise that Gandalf has made is valid and Gandalf can be sued by court if Froddo make an action to compensate the reward as well.

And there is another act which is Agreement to Compensate an Act the Promisor was Legally Compelled to Do Section 26 (b).

In order to use this exception, there are three conditions to fulfill. Firstly, the promise has voluntarily done an act. To apply in this case, as we can see, Froddo took the ring with him since he knew the ring was belonged to Gandalf. Generally, Froddo did it voluntary without knowing that Gandalf would give a reward to those who return the ring to him. If Froddo did not take the ring with him, possibly the ring would be found by anyone else and was not returned to Gandalf. That is the benefit Gandalf could get and Froddo should get the reward.

Secondly, the act that was done by the promise was actually an act that the promisor himself was legally bound to do. To apply this, we know that Gandalf himself is bound to reward those who return his ring back to him with RM5000. This is a promise that Gandalf has made by himself although there was no consideration between Froddo and himself. Lastly, the agreement must be compensate the promise either wholly or partly for what the promisee had done. Whatever it is, Gandalf must compensate Froddo the amount that he had promised earlier as the reward of returning his ring.

If Gandalf did not perform this act, Froddo can sue him for breach of promise as well. As we might know, there is a case for this act. It is J. M. Wotherspoon & Co Ltd VS Henry Agency House. In this case, there were promises of compensation made by the D to the P in respect of past act. However, these promises were not supported by consideration. So, those promises could only be legally enforceable if it is a promise to compensate a person who has already voluntarily done something for the promisor.

Held: Voluntarily means the acts performed or done by one’s own choice and not constrained, prompted or suggested by another. In this case, the P had acted on the suggestion of the D. So the P’s action could not be said to have been done voluntarily. Therefore, the promise made by D to compensate the P was not an enforceable contract within the exception of Section 26 (b). Back to this case, if Froddo pays a fine imposed by the court on Gandalf who promises to compensate him, that promise is binding under this provision and Gandalf can be sued for breach a contract.

To conclude, Froddo could win over this case which similar to Gandalf can be sued by the court or Froddo can claim the reward that has been made by Gandalf himself and Gandalf is free from any court action. In the other hand, if Froddo was aware of the reward before he handed the ring over to Gandalf but his intention in handing back the ring to Gandalf was on goodwill, I think the consideration was not happening and there was no contract between Froddo and Gandalf at all.

An Agreement to Compensate for a Past Voluntary Act Section 26(b). (2016, Jul 16). Retrieved from https://studymoose.com/an-agreement-to-compensate-for-a-past-voluntary-act-section-26b-essay 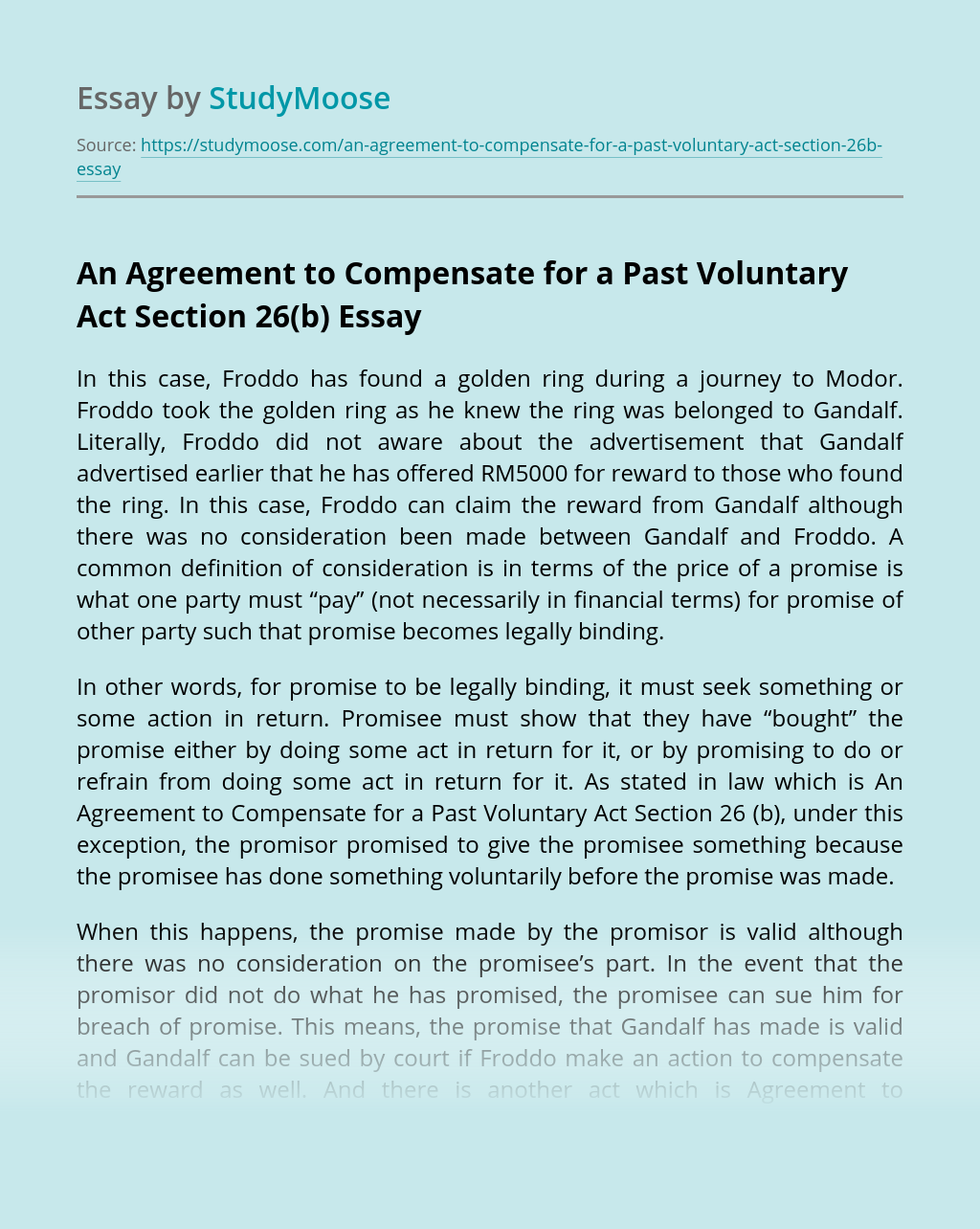