What significant ideas relating to belonging are explored in your related text? In the 1969 poem “An Absolutely Ordinary Rainbow” by influential Australian poet Les Murray many key themes are explored, for example belonging. Significant ideas such as acceptance and fear of both individuality and conformity are intensely critiqued in this poem by using a grown man to depict the fear of abnormality and segregation within society. Belonging can be perceived as a sense of segregation, compliance and idiosyncrasy states of being that are scattered throughout Murray’s text.

Don't use plagiarized sources.
Get Your Custom Essay on ?An Absolutely Ordinary Rainbow Just from $13,9/Page

Murray channels the effects of acceptance within belonging through his interpretation of human condition and desire. He does this throughout his poem, expressing the increased conformity from child to adult growth. Murray uses a simile to express this concept of belonging in the quote “their minds longing for tears as children for a rainbow.” This quote comes after telling his audience of the growing crowd surrounding this constant weeping coming from a respectable man.

The use of this simile depicts the inner child within the members of society who have conformed to social standards and have lost the ability to show raw emotion. The quote also touches on the linking between tears and rainbow within the simile. Tears being a metaphor for rain, as a heavy downpour of rain often produces a rainbow which can metaphorically be linked to being a sense of happiness and joy. Through this technique Murray has demonstrated the journey and changes in which people have gone through to find that sense of belonging within society.

Repetition of allusions is used to create a sense of understanding to Murray’s audience, as shown in the example “The word goes round Repins, the murmur goes round Lorenzinis” By using what were, of the time, social hubs and gatherings within Sydney he creates a sense of familiarity to his audience. This adds fuel to the idea of human desire to belong, by the news of the story spreading it conveys conditioned human desire to belong and be a part of something which is not a need or must. These allusions create the effect of a sense of realism and identification to the reader which presents both a fictional and personal desire to belong as the reader now feels connected to the poem and as though they are accepted within the fictional tale.

Murrays use of symbolism is bold yet simplistic as demonstrated in the quote “Some will say in years to come, a halo or force stood around him.” By symbolic use of supernatural themes Murray is masking the underlying greatness and fearlessness of the weeping mans act of refusal to conform. The effect of these symbolic words is to illustrate to the reader that the man appears to be a unyielding hero rather than a pitiful mess. Creating a newfound sense of emotional belonging within the readers mind, belonging to the minority rather than the majority going against human condition.

In conclusion “An Absolutely Ordinary Rainbow” can be culminated as being a complete, consistent metaphor as stated in the title the weeping man is a rainbow a metaphor in itself. Which leads to my judgement that belonging and social acceptance are explored briefly yet broadly within Murrays demure approach to a variety of ideas relating to belonging. 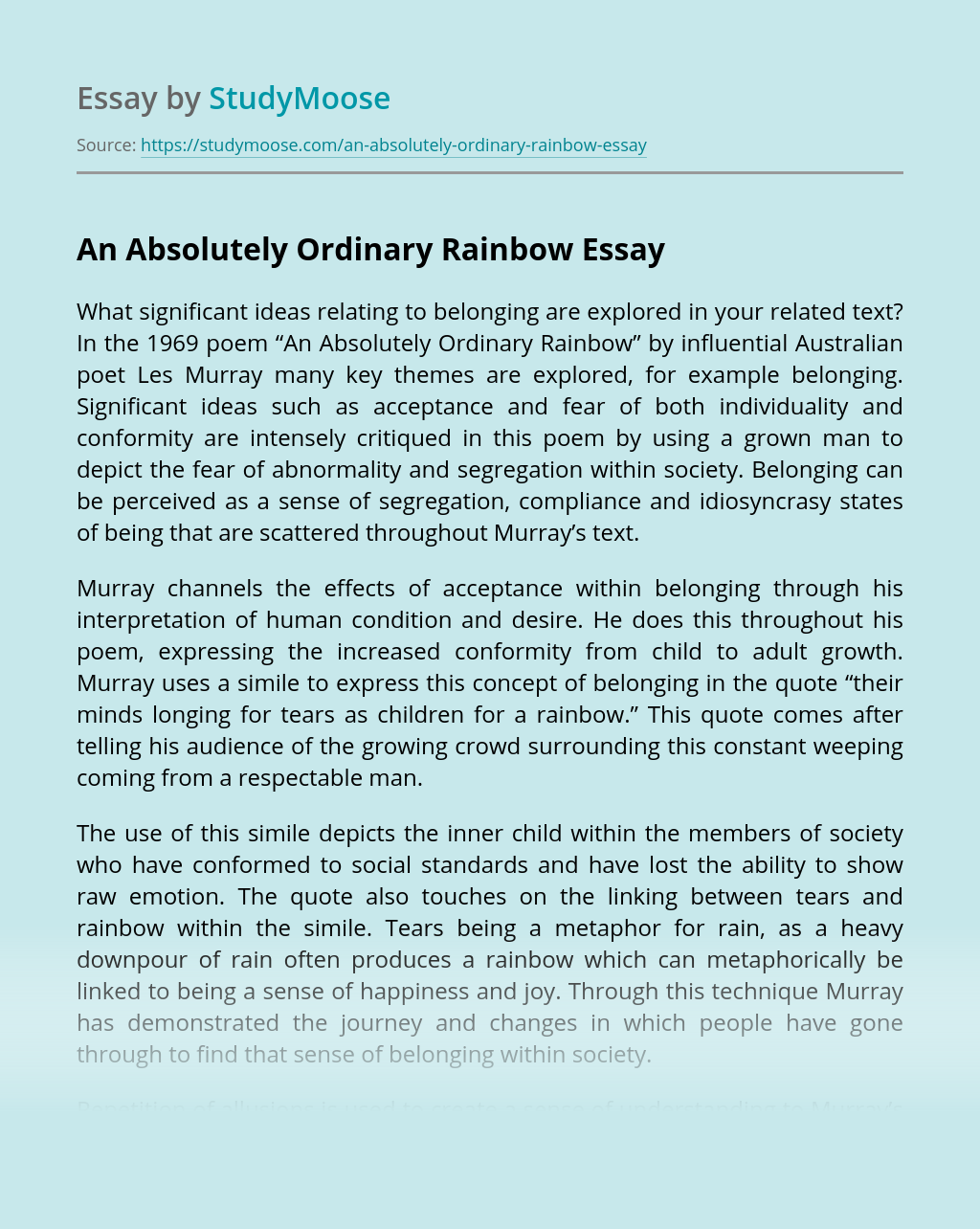 Though many struggle to be there own person. Many struggle to decide things on there own.We are all different, but most of us are the same, because of conformity. Conformity is the easy way of things. Following the leader is the natural way of humans. For an example take Germany during World War II. There...

The film fight club has the theme of conformity and can be seen in many parts of the film. The film starts with the narrator’s insomnia then he starts to give details about his daily life. He is a recall specialist in a big automotive company and works 9:00 a.m. to 17:00 p.m. and wears...

What significant ideas relating to belonging are explored in your related text? In the 1969 poem “An Absolutely Ordinary Rainbow” by influential Australian poet Les Murray many key themes are explored, for example belonging. Significant ideas such as acceptance and fear of both individuality and conformity are intensely critiqued in this poem by using a...