AmorePacific, the leader in the Korean market for beauty products, was established in 1945 with a strong focus on researching and developing products based on Korean home remedies. The company 1959, listed its shares in the Korea Stock Exchange in 1973, and changed its name to AmorePacific Corporation in 1993. Industry dynamics and pace of development at Amore Pacific accelerated greatly during the 1990s. Domestically, anticipated entry by multinationals forced major changes in corporate and business strategy with a rigorous refocus on cosmetics by the mid-1990s, slashing of affiliates and reduction of headcount.

Don't use plagiarized sources. Get your custom essay on
“ Amore Pacific ”
Get custom paper
NEW! smart matching with writer

[At the business level, it repositioned itself and its brands domestically and deepened its commitments by investing in product development and manufacturing as well as marketing/distribution in selected foreign markets, gearing itself for the challenges of the new millennium.

AMORE PACIFIC’s initial exploration of exporting face powders to USA based Coty, coupled with its strong market share in Korea, and its strength in herbal/ home remedies all paved the way for a successful entry into the international arena.

But this path was not without the initial bumps as AmorePacific had a slow start; success only came about after deep understanding of the various foreign markets along with committed R&D and infrastructure investment. The biggest future challenge for AmorePacific is achieving synergy across its main markets and continuing with further expansions into new markets/ countries. For this a comprehensive strategy outlining products, production/ sourcing, marketing and distribution is required. This is important because in a very diverse world, many foreign contexts will be alien to many of the managers who must decide on cross-border issues. In such situations, success in home country is not enough.

Where does AmorePacific make most of its money? How has it been able to dominate the Korean market against local firms such as LG Household and Healthcare (HHC)? Against multinationals such as L’Oreal?

In 2004 Amore pacific nabbed a place in the top 30 companies worldwide with a 30% share of the Korean market. While that of LG Household and Healthcare stood at 8% within the same context. Amongst other reasons one of the reasons for its relatively slow progress in comparison to Amorepacific was its late entry into the cosmetics business along with the heavy financial and restructuring costs over the same time period. This lead to a lack of innovation on its part generally following a me-too strategy to AmorePacific. For example setting up its own chain of stores and establishing door to door sales netwoek without a clear strategy.

According to exhibit 7 AmorePacfic leads the market with significant investments in advertising, sales, and R&D; 20,000 Amore women, 350 specialty outlets versus 39 outlets for LG, development of innovative and relevant distribution channels and strong positioning of different product lines are just a few of the examples. Multinationals entering the market was relatively difficult due to the government division and depreciation of the dollar. This was magnified with the fact that the multinationals like L’oreal had to import their products due to a lack of investment in production infrastructure. This lead to a higher cost of goods sold mainly due to high tariff rates of 8%. Consequently leading to a high priced product to the consumer and this availability and distribution was restricted to high priced departmental store channels.

We can see that LG HHC was losing money, and was never very profitable in economic terms, after allowing for cost of capital. This was mainly due to limited access/scale of distribution; cosmetics was not the main business for LG HHC. On the other hand Amore Pacific enjoyed a strategic advantage over LG as all their efforts were centered around the cosmetics business and they had greater advantages to leverage and typically get trade and consumer on their side; thus share of specific market winning over total size of business. AmorePacific had been earning healthy (20%-plus) operating margins on the Korean cosmetic business whereas LG had seen its profitability drop down to zero in 2004.

In a situation like this considering price realizations, or the willingness to pay; it is difficult to support a door-to-door sales force if you’ve got a 10%, 15% share of the market.

Assess the performance of MNC’s – how do they compare against local competitors? What are the reasons for local companies outperformaing MNC’s?

Global Expansion strategyMainly centering around acquisitions in the Asian market starting off with Mininurse in China which was a well penetrated skin-care brand and later Yue-Sai. This enabled L’Oreal to bank on the existing company’s consumer and market expertise in the region without initiating heavy investment in product development, distribution or marketing strategy. Focus on Inorganic growth. Shiseido favored a joint investment with local partners. ProtectionismLarge established share; FDI’s welcomes at much later stage in country Financial supportGlobal presence provided the backbone for investments in the wake of Korea’s financial and money market crisis. R&DVertical integration aiding operations and quick product development. Successive launches of Hera, IOPE and Sulwhasoo focusing on different age groups, SEC’s and distribution channels.

Focus on developing products as per Korean tastes rose after 10 years of its presence in Korea Distribution Rationalized distribution: AmorePacific was operating at three distribution markets. One was mass, the other one was door to door, and the third one was specialty Success in self developed channel of door-to-door (contributing 85% sales comprising 20,000 women employees) and agility in specialty stores (Amore opened 350 outlets in Korea while for LG opened only 39.)Concentration on high end/ high cost department store channel. Shisiedo opened up Les Salons du Palais Royal, a high end beauty parlor in Paris in 1992 and focussed on providing “beauty consulting” to consumers Marketing ExpenditureStrong focus with media advertising, beauty magazines and sponsoring relevant events; moving onto more innovative means of communication via magazines and new media.

High investment in advertising spend and expertise in marketing management. Shisiedo localised product development but used global modeling for marketing (Eau d’Issey by Issey Miyake of Japan and Jean Paul Gaultier, named after its French creator) Cost vs. Foreignness advantageLocal manufacturing with indigenous materials sustaining prices at lower levels than MNC’s. Added support through the “Made in Korea” campaign. Adapting to market conditions; sticking to local celebrities albeit at higher cost to consumers Product PortfolioFocus on skin care and products developed typically for the Korean woman (products developed from home remedies with ginseng proving to be USP).

Leverage of the biggest global beauty brands in its portfolio. To keep prices affordable for local consumers L’Oreal launched Maybelline with little success in bringing down relative pricesAlso operating in household products but mainstay was Olay; a personal care brandLargest player in various food categories with an extensive interest in personal care Competing in global perfumes market as well as cosmetics.

Brand management/restructuring: Strong brand personality, project top of the line product, Asian beauty with global appeal; supported by a strong diverse product line each with their distinct positioning. Scale/ relative size: Amore Pacific’s cosmetic presence was about three times as big versus LG. Given that R&D, and advertising should be considered fixed costs and wouldn’t vary with volume; assuming they spend 10% on R&D and sales, and 14%, 15% advertising, supported by a higher local share, AP can amortize the cost over their international volume.

Better understanding of the market: This lead to stronger strategies that were not easy to implement for multinational companies who have less flexibility and were not as prepared to come with a door-to-door sales force or the same marketing tactics. Product development and R&D: Having a strong R&D infrastructure provides a strength like no other and also serves a a strong barrier to entry for multinationals. Brand loyalty: Amore Pacififc has been number one in the Korean market for 60 years and has a solid line of loyal consumers and traders on its side.

Which of AmorePacific’s three principal international targets—France/Europe, China and the United States—seems the most promising? Should a penetration strategy for the U.S./Europe differ from that for China?

Which market makes most sense for cosmetic company from Korea/how do you select which market to go into?

High government involvement in Chinese industry; presence of state-owned enterprises, many of which are inefficient and/or insolvent

No administrative ties with France or USA; disadvantage of not being part of EUCommon border; in the 19th century, South Korea closed all borders to trade except for the one with China

Differences in infrastructure and distribution structures

Fulfillment of the 2015 vision required global expansion with significant growth from the international markets. In 2004, Amore Pacific had international sales worth $100mn. Coming from France, China and USA and modestly from Hong Kong and Taiwan. Geographic affinity to China coupled with close cultural ties and similar distribution scenario vs. greater investment in R&D, brand development and marketing strategy in USA The value of growth had to pass the ROI test with business earning positive economic results coupled with greatest market potential. Decreasing Costs

Global expansion can decrease costs through either size (scale/scope) economies or absolute economies. Size-based cost economies seem redundant in this industry: product/ brand affiliations center more around brand benefit, loyalty and credibility; expenditures on product development and branding are constant. Similarities in opportunities across both countries includes. Set-up of specialty stores prolific in both countries; ROI seemingly better in USA since target market is upper SEC. Retail expansion leading to price affordability of products Differentiating/Driving up Willingness to Pay

What other recommendations would you make to Suh Kyung-Bae about AmorePacific’s internationalization?

Can we give reference to some academic theories here, based on issues of internationalization strategy? 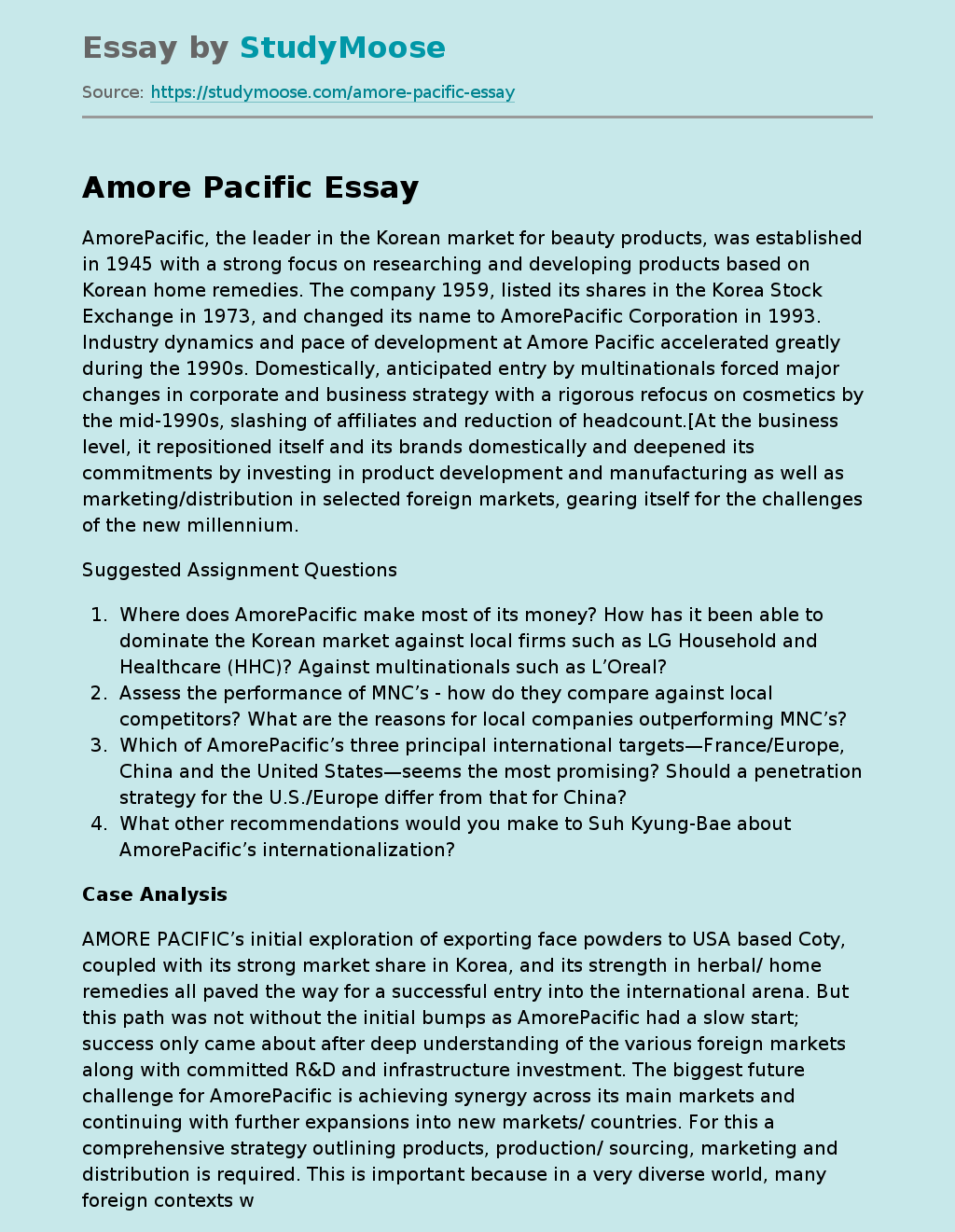