Amir's Path to Redemption in The Kite Runner

Amir’s conceited self moulded Hassan to his desolated state in which his presence was unsought and bare. Amir attempts to rebound his actions revealing the statement, and defines it. I will discuss the event leading up to Hassan’s deceitful relationship with Amir; what Amir did in order to replenish his actions; and how this affected Amir’s life.

In the novel Kite Runner, Hazaras were belittled, and that the problem of alterity occurs in Afghanistan. The harmonious gathering for kite flying was seen as hope and future for many with empty minds.

Don't use plagiarized sources. Get your custom essay on
“ Amir’s Path to Redemption in The Kite Runner ”
Get custom paper
NEW! smart matching with writer

Amir’s resentful feelings, eaten up with jealousy, stood as his eyes colored in the view of Hassan being raped. The conspicuous, untouched face filled of “shameful lies,” urges Amir to the cognizance that “there is only one sin “that he had to still understand. The notion that” a boy who won’t stand up for himself becomes a man who can’t stand up to anything,” stimulates Amir and governs his caring, solicitous character throughout the novel.

Propelling his drive for retrieval, and attempt to be “someone who Baba would have been proud of,” juxtaposes his state of class with Baba in the beginning, selfish and his betrayal to those that love him, for himself. Hassan flays away from Amir and Baba, after the framed robbery from Amir.

A major theme in the novel is ‘The Past.’ Amir is haunted by his past; this is evident as his guilt drives almost all his actions. Hassan’s death was put upon Amir, as he was perceived as the reason to Hassan being kicked out.

He knew that it was “better to get hurt by the truth than comforted with a lie,” and therefore, looked for the “way to be good again.” Hassan’s loyalty to Amir was seen as fraudulent in Amir’s eyes, as he felt he “betrayed the people who would have given their lives for” him. Hence, Amir had a covetous urge to tend Sohrab, Hassan’s son, as he was exterminated by the Taliban for refusal. The last time Amir saw him was “in a faded Polaroid photograph.” In an attempt to take care of Sohrab, Amir sacrificed himself, just as Hassan sacrificed himself for Amir. In measures, he symbolized Hassan’s cleft lip, when he lacerated his lip. As a result, equalized the life of Hassan in the circumstance of a guardian.

Hassan symbolizes the poverty he lived in, as the cleft lip was seen as a deformation they couldn’t afford to fix. “A thousand times over” Amir was seen as the erroneous “monster.” Both characters can be seen as heroic, as Amir saved Sohrab from deleterious Taliban men. As Sohrab saved Amir by giving him a chance to atone his sins previously “hidden nook in a corner of my mind.” Giving him the plausibility to have a child.

Hence how Amir in his own way, was the liberator of Sohrab, as well as to atone for his sins. Giving Sohrab a perfectly fitted outfit to flourish.

Amir's Path to Redemption in The Kite Runner. (2021, Mar 02). Retrieved from https://studymoose.com/amir-s-path-to-redemption-in-the-kite-runner-essay 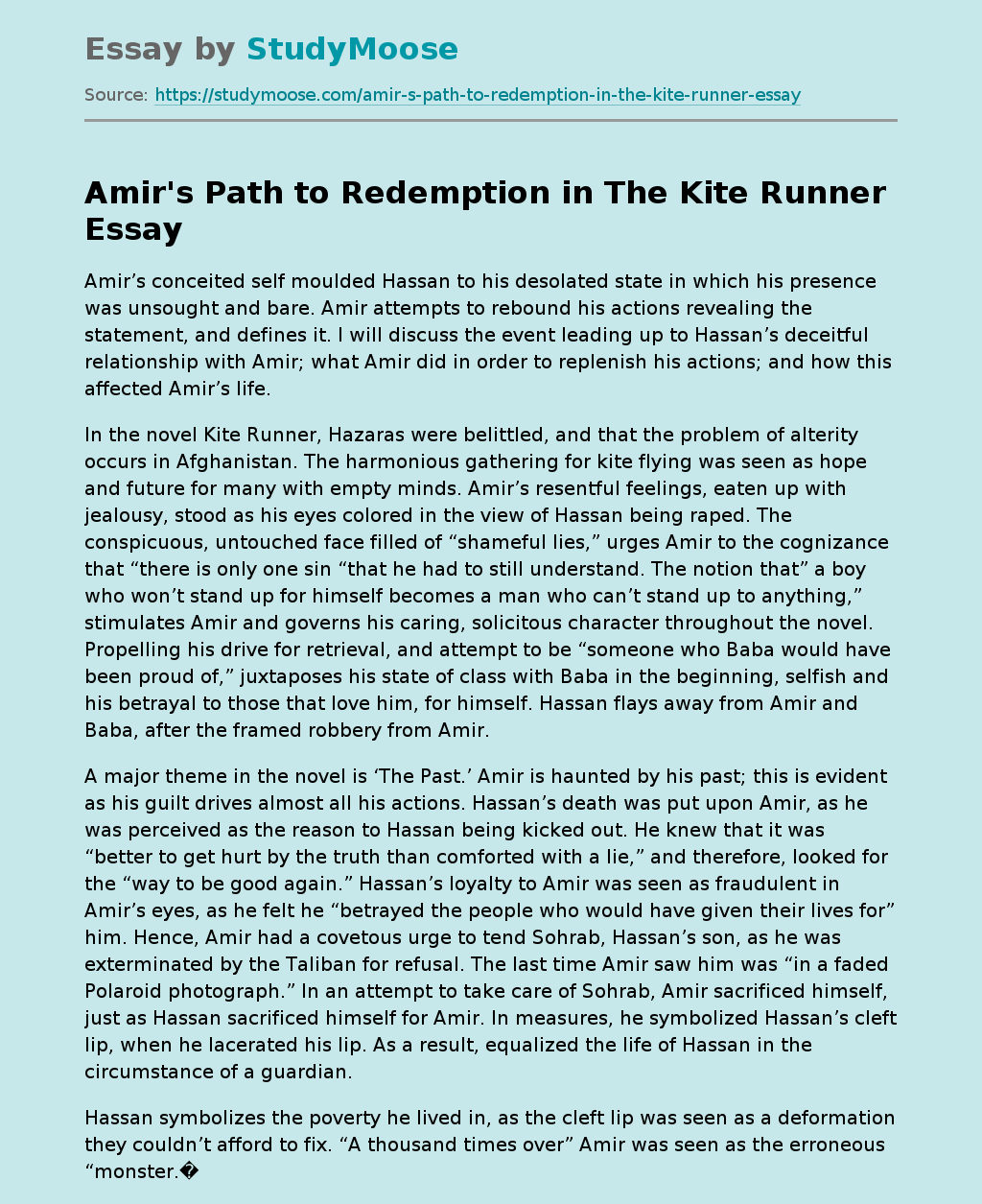