The influential factors that contributed to the vigorous economic expansion of America during the 1840’s through the 1860’s, consisted of the Industrial Revolution, the Improvements in Transportation, and Internal Expansion, all played a vital role in helping form the dynamic economy.

The nations industry was rapidly growing more efficient, better quality products, with help of the advances in manufacturing technology. A change from unmarried female factory workers, to Irish immigrants greatly impacted America socially, due to the separation between the natives and the immigrants.

Don't use plagiarized sources. Get your custom essay on
“ America’s Economy during the 1840’s through the 1860’s ”
Get custom paper
NEW! smart matching with writer

Despite the growing separation of classes, this huge amount of workers for factories and consumers for products greatly stimulated the economy.

The factory mode of production greatly changed during this time period as well, the weaving and processing of wool was all performed in the same factory, along with iron being forged and rolled in the same location also. The key components of the method of production was having a group of an administer looking over a group of workers in one location, cash wages to the workers, and the use of interchangeable parts.

Although mass production was improving, traditional methods maintained and ruled the industries.

In early America due to the complexity and cost of moving goods, westerners were in general secluded from the rest of America. A revolution in transportation began to aid the westerners in joining the entire Nation. Roads, railroads and canals improvements began to be developed, helping the improvement in shipping. Canals began to become a key part of transporting products from interior regions where they were grown, to the coast where they were consumed.

By 1840; America three thousand miles of canals were controlled by America. Also the railroads were important, because of areas in the U.S. where rivers and canals could not exist, railroads could reach those areas. Unlike canals that could not run during some conditions, such as when water was frozen, railroads could run year round.

These transportation improvements helped to cut the costs of goods and increase the speed of moving the goods. Although originally the demand for iron rails was imported from England, eventually it led to the development of domestic iron industry. A new method of financing business enterprise was developed, instead of family or partnerships, railroad companies sold stock to everyone, which helped start the separation of ownership and control develop that is still used today. Also the railroad companies were lent money by the local governments, which saw the railroads as a vital aspect to prosperity. Due to increased transportation the distribution of agriculture through the mid west and west helped the creation of a national market, for the reason that the goods could be transported anywhere in the country. Market competition increased, because manufactures had to compete to produce a better and less expensive product. Also wherever the transportation went, the real estate value shot up, which helped persuade settlers to move westward.

Improvements in technology greatly impacted America’s economy during this time, such as the telegraph invented by Samuel F. B. Morse, which helped the expansion of America, by being able to communicate better over long-distance areas. Charles Goodyear’s vulcanizations of rubber helped to make rubber more useful so that it would not melt and stick in hot temperatures. Elias Howe’s sewing machine built the foundation of ready-to-wear clothing. Richard M. Hoe who invented the Rotary printing press, which printed a sheet in one movement, speeded up the printing process All of these inventions, improvements helped the economy develop into a more efficient, cost-saving, and time-saving economy.

Before the 1840’s there was a rather rigid social codes, it was uncommon for a man to exceed the social status from which he was born, most followed their fathers trade, or one similar in status. The Gold Rush changed the American system forever, it became possible to become rich overnight, and to change ones destiny. This was due to the findings of James W Marshall who found gold near Sacramento, California, people from all over America and other countries flocked to California in search of getting rich quick. The gold rush aided the economy by creating new businesses and development on the west coast, also it created more specie, which meant that paper money was backed up by more gold and therefore curbed inflation and strengthened the dollar again.

In conclusion the industrial revolution, improvements in transportation, inventions and the Gold Rush, greatly played a part in the dynamic quality of the economy. America was on its way to an improved country. 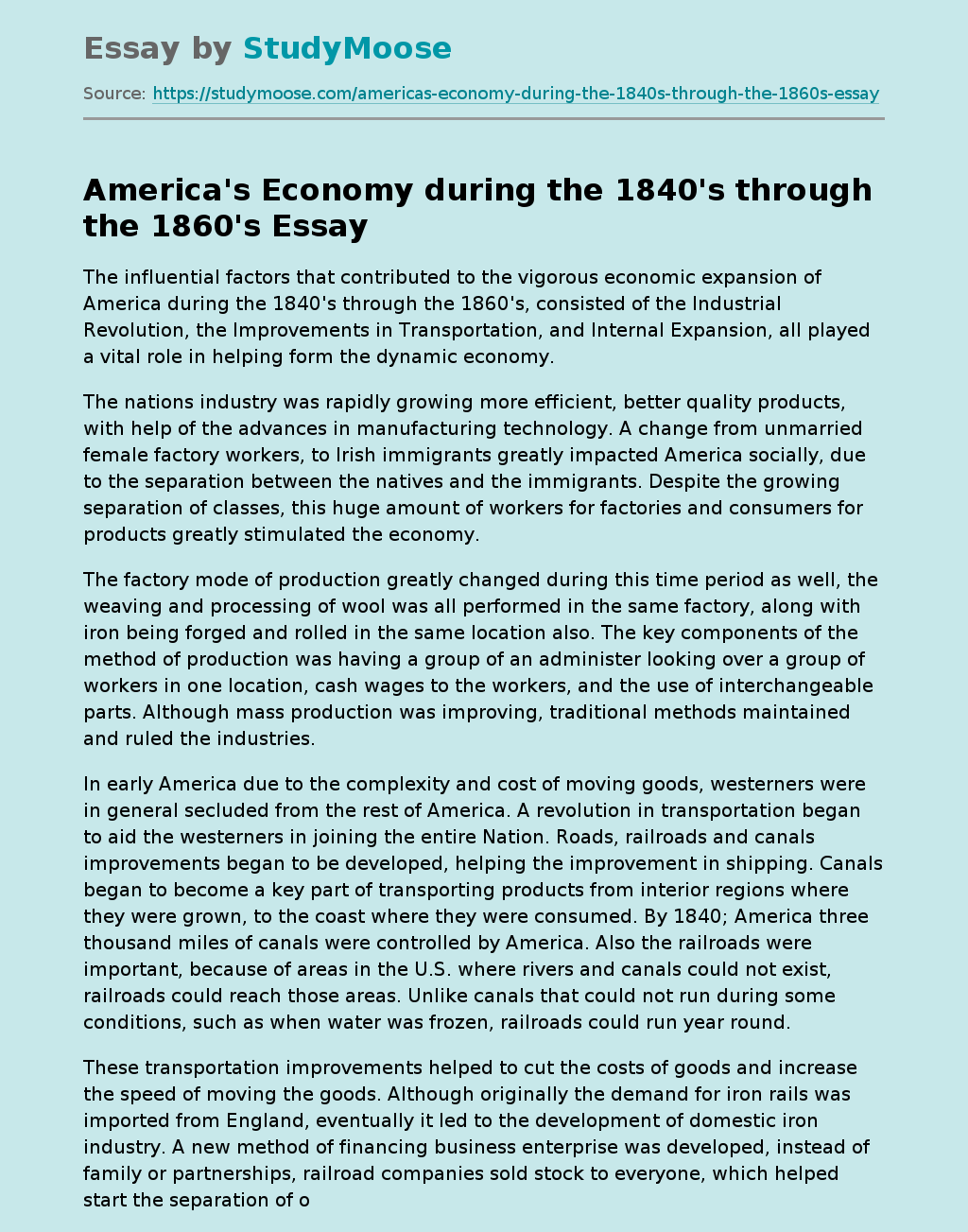