Before the Europeans explorers had arrived, the descendants of the prehistoric pioneers and later migrants – the Native Americans – had formed a variety of tribes throughout North America. Each tribe was related. Some were simple nomads who roamed through the west of the continent, while some were forest dwellers who worked as hunters and fishermen. The southwest region of North America was home to the farming people of the Pueblo country, inhabiting substantial cities of stone or adobe (clay).

In the Four-Corners (Utah, Colorado, Arizona and New Mexico) area was where the Anasazi people (a.

Don't use plagiarized sources. Get your custom essay on
“ Americas Before Columbus ”
Get custom paper
NEW! smart matching with writer

k. a. the “ancient ones”) were settled. Their culture began in about 100 BC. Along the Mississippi we villages of the Mound Builders who built giant earthworks atop which they worshiped their gods. At this time, the Native Americans spoke many different languages, some as different from each other as Italian from English. More than 200 languages and dialects were developed. There were great variations in customs and traditions from tribe to tribe.

Much of North America was not a very good for people to live in, which is why not that many people lived in North America around 1500.

In the northern regions, it’s too cold to support very many people. The winters are too long to grow crops, and there was’t enough plant life growing in the wild to support people unless there was a lot of land for each person. In the southwest, there are huge deserts, and even most of the way up the Pacific coast (in what is now California) it is generally too dry for farming.

You can only farm using irrigation. The early Pueblo people used irrigation for farming. The Great Plains, in the middle of the continent, is a grassland for herds of animals like the buffalo, but mostly still too dry for farming without the use of irrigation.

People in the Plains lived by mainly hunting buffalo. In the Rocky Mountains, soil was also was no good for farming. Native American tribes in that area such as the Ute lived by hunting and gathering. Along the Mississippi Valley and the Atlantic coast, there was good farmland, and there people like the Mississippians, Iroquois, Sioux, and Cherokee farmed sunflowers, corn, and beans. Because of this, more people were living there. In the Pacific Northwest, there was an abundance of salmon that could feed a lot of people without farming, and Chinook along with other people lived there.

The environment changed a great deal between the last Ice Age and 1500 AD, partly because of natural occurrences and partly because of things people did. When people crossed over the land bridge from East Asia, during the Ice Age, North America was partially covered with glaciers. The ice covered the Great Lakes, and most of New York State. The Rocky Mountains had glaciers on them too. In the part of the land that wasn’t covered by glaciers, there were a lot of very big animals like mammoths and a huge kind of bison, as well as early horses and camels.

With the end of the Ice Age (10,000BC), the glaciers melted and shrank, until they only covered the most northern part of North America and a little part of the Rocky Mountains as well as other mountains. The climate became warmer all over North America, and there was less grass for the big animals to ear. Most of them became extinct. New animals like the cattle that became the American buffalo, and the dogs that came along with people, moved in from East Asia. South America South America is a long, narrow continent running from the equator down nearly to the South pole.

So the northern part near the equator is hot and wet, and the southern part is very cold. Native Americans spread out quickly in South America and adapted their lifestyle to the given climate. They inhabited the hot and humid jungles and the cold Andes Mountains, which run down the coast of South America. In these mountains, there are llamas, guanacos, vicunas, alpacas, and guinea pigs. The most popular culture of the area was the Inca. Near the equator, the Amazon River runs east to the Atlantic Ocean. It is the largest river in the world, and it’s water feeds a rich jungle that covers a lot of eastern South America.

Rubber trees grow in the jungle. Jaguars, tapirs, bats, frogs, and anaconda snakes live there, while dolphins, electric eels and piranhas live in the Amazon River. 3. Some Native American people made a lot of their clothing out of deerskins or the skins of the other animals. Others wore clothes made of yucca and turkey feathers. While some wove clothing out of bark strips or strands of hemp. Men wore decorative hats with feathers. In the cold south near the artic, they made boots out of seal skin. For food they grew crops, hunted, fished and gathered wild plants. The men had to hunt while the women farmed and gathered.

Some of the foods they ate were pumpkins, bison, deer, moose, blackberries, fish, corn, nuts, beans, and potatoes. Through rituals and prayers, they tried to please the spirits. Often their rituals included dances. If the spirits liked their dances they would give, in return, rain for their next crop. Some believed in various gods and practiced the Sun dance. They hand made pottery, wove baskets, and made jewelry to wear. Native Americans used what ever resources they had to built their shelter. They used caves for rain, cold wind, a place to hide for protection from animals and enemies.

They lived in cone, dome, and rectangular-shaped houses or wigwams. They also lived in teepees, or wickiups (a frame of wood held together with yucca fibers and covered with brush), and hogans. Some built their homes out of adobe (sun-dried bricks), others made their home out of logs, brush and mud. Other Native Americans lived near the cold artic and used igloos for shelter which were houses made of snow and ice. 4. I believe that I would not be able to survive if I was to be transported to the 1490’s. Teens today are not taught to have the skills of survival that the Native Americans used during that time.

Clearly, we are more advanced now than we were approximately all those years ago. Most of the teens and adults of today’s society are so used to having their smart phone attached to their hip 24/7. Truthfully, I don’t think I could survive with out it. Today, if we have a question, we would just Google it. Do you think the Native Americans had luxury of researching a problem and getting an answer in less than 2 minutes? It would probably take me a lifetime to figure out the simplest of tasks if I living in America before 1500 AD. Sometimes we forget to take a moment to think about how lucky we are.

When you think of hunting, you think of modern day weapons. When you think of farming, you think of tractors and other modern machines. I doubt that the Native Americans had those tools. Heck, I would have to make my own tools. I’d probably starve to death before I found a way to make the tools needed to survive. I believe most teens today would not be able to survive. The fact that technology, as we know it, would be non-existent in America before Columbus arrived, would make it a very difficult existence. I truly believe that daily life would be too difficult for me, and I would most likely not survive for very long at all. 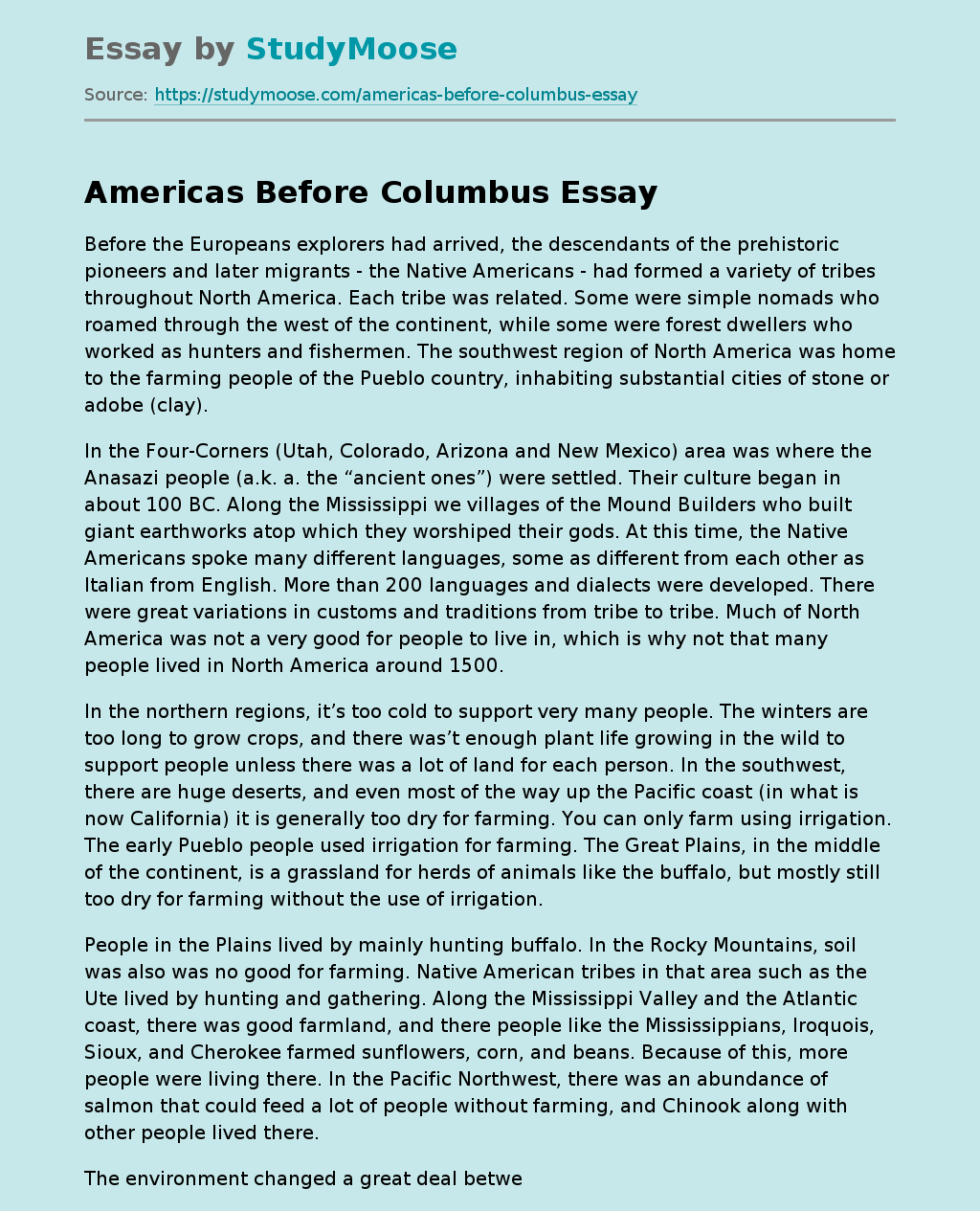