Americans do not require a lot of rules regarding their social or work life but have a preference for broad guidelines instead. They are also less emotionally expressive than higher-scoring cultures such as Japan with its score of 92. This notion of risk averseness shows itself regarding takeover of business. People in uncertainty avoiding cultures tend towards taking over existing business rather than starting a new one. Taking over an established firm shows low levels of uncertainty since the entrepreneur can build on already existing structures such as products, the firmґs organization and market access.

Don't use plagiarized sources. Get your custom essay on
“ Americans do not require a lot of rules regarding their social or ”
Get custom paper
NEW! smart matching with writer

New companies however have to develop these assets and face a significant amount of uncertainty until establishing them-selves .Hence, more people work in smaller businesses and start-ups than in large corpora-tions in the Unites States whereas countries with higher scores of uncertainty avoid-ance such as Japan have more people employed in large public or private corpora-tions .This lack of entrepreneurial risk taking also shows itself in the small number of newly founded enterprises in Japan.

Between 1981 and 1994, the number of new Japanese businesses formed was less than 5% a year of the nation’s total companies. Compared to this low number, the United States growth of new businesses was 22% in the early 1980s and even 8% in 1990″91 recession. Furthermore, from 1991 to 1994, just as many Japanese companies went bankrupt as were formed .Before projects are realized or new ventures started, every risk factor needs to be assessed and a lot of time is put into that. All facts and figures have to be clear be-fore making a decision.

This risk averseness and very high need for uncertainty avoidance makes implementing changes in Japan very difficult . 3.1.4 Masculinity vs. FemininityThe masculinity/femininity dimension is the only dimension for which differences between genders were identified. Hofstede worked out eight different items at-tached to the masculine and the feminine pole of work-related goals. These are Earn-ings, Recognition, Advancement and Challenge for the masculine pole as well as hav-ing a good relationship with your superior, Cooperation, living in a desirable area for your family and Employment security for the feminine pole . The US scores a mediocre 62 points on the masculinity index whereas Japan scores 95, the second highest score in the world after Slovakia . This reflects the im-portance of recognition and advancement in Japan . Hofstede defines masculine cultures as called masculine when emotional gender roles are clearly distinct: men are supposed to be assertive, tough, and focused on material success, whereas women are supposed to be more modest, tender, and concerned with the quality of life . The masculinity score, unlike individualism, is not linked to the economic develop-ment of a country . In more feminine cultures, the differences between men and women are smaller and both are seen as equal, focusing on balance of life and shared responsibilities. Where-as in masculine cultures, there are greater differences regarding the aforementioned eight characteristics. In both the US and Japan the share of female workers rose to 47% in the US and 43% in Japan by 2014 . Although with the rise of educational possibilities for women, their share of employ-ment also grew, it is still hard to climb up corporate ladders in Japan with their mas-culine work environment. The government has set a 30% goal for female managers to be achieved by 2020 . Apart from the lack of female managers in corporations, it also has a very low number of female politicians and members of parliament. There is currently only one woman serving in the Prime Ministerґs cabinet . This is also due to lacking possibilities for women to maintain both a career and a family, as it is still seen as a womanґs duty to care for the children. As many as 70% of women in Japan leave their work after having their first child . Re-entering the workforce after having a child is made difficult by Japanese customs of assigning low-paid, part-time work or work for which the educated women are overqualified for and have limited promotional opportunities at . All this contributes to the innate masculine culture in Japan and continues to hinder change towards a more feminine and equality-based society.The US American score on the masculinity dimension is above average with 62, yet not as high as the Japanese 95. This goes well along with the high American Individ-ualism score of 91. The notion of self-made men and the strive to be the best at what you are doing, relying solely on yourself as an individual and the competitive-ness of a masculine society all show themselves in this combination which builds the outside view the world has on American culture. The masculine nature of the American society can also be seen in the likeliness of Americans to choose a job they are good at or a higher paid job over one they would enjoy more. The individual decision-making, being tough and independent also all relate to individualism as well as masculine traits. Being successful per se is not the great motivator in American society, but being able to show one’s success . After reaching a certain level, including a high monetary status, people tend to move to cities or neighborhoods that show success by being able to live there. These are cities like Greenwich, Connecticut or the Upper West Side in New York City.

Americans do not require a lot of rules regarding their social or. (2019, Aug 20). Retrieved from http://studymoose.com/americans-do-not-require-a-lot-of-rules-regarding-their-social-or-essay 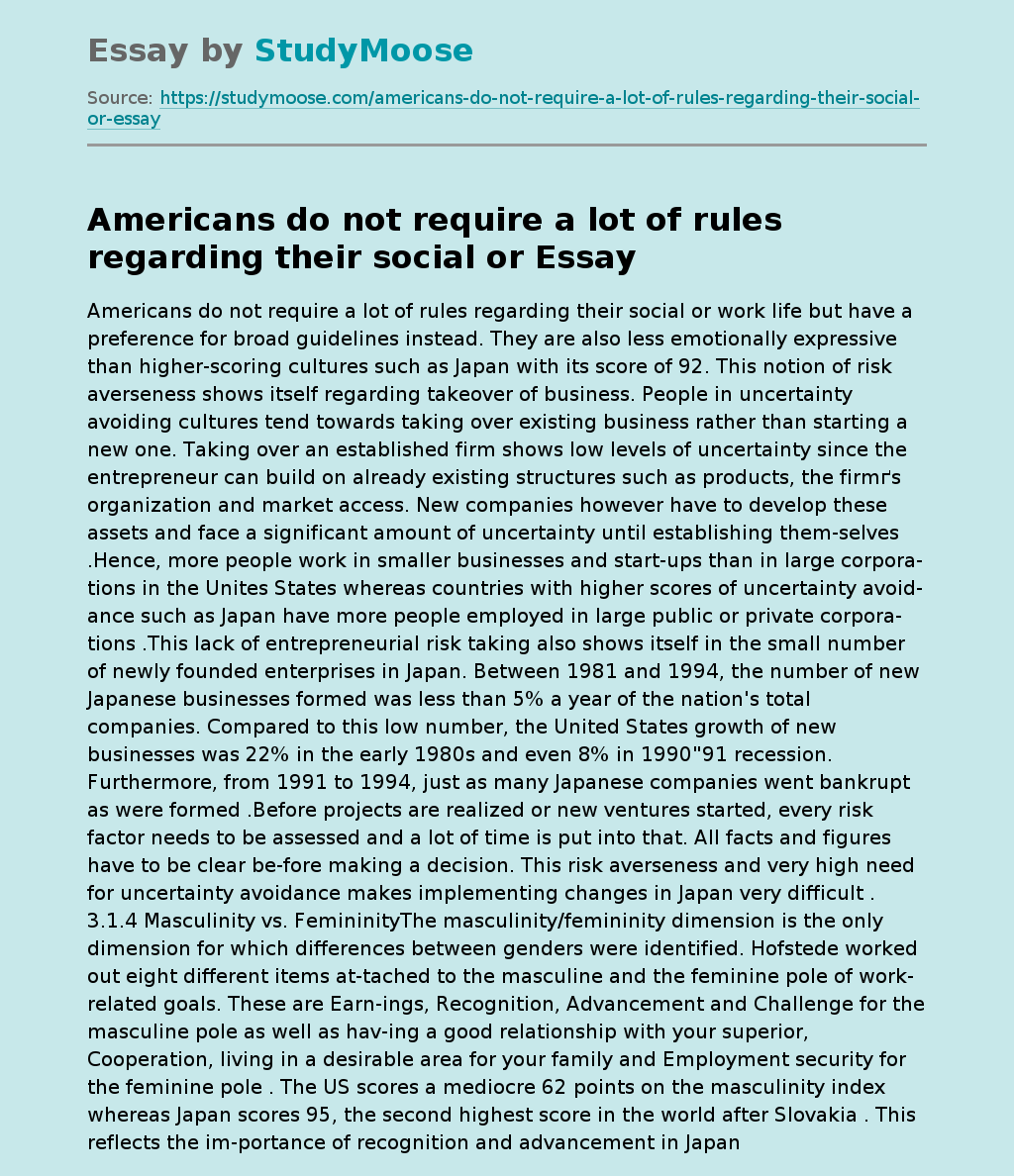