American Revolution, Market Driven or Not

Was the American Revolution largely a product of market-driven consumer forces?

The American Revolution paved the way for democratic rule in nations and ignited the spreading thereof throughout the whole world. Yet events that led up the start of the revolution have been mixed in their significance by historians. Both historians, Carl Degler and T.H. Breen agree that the British mercantile system had benefited the colonists, allowing them to have comfortable lifestyles. Madaras L, SoRelle J (2011) An argument of both the historians Carl Degler and Fred Anderson, is that the Victory over the French by the British in the Seven Years’ War enabled the Americans Revolution by removing the Threat of the French the American colonist no longer needed the British support for protection.

Don't use plagiarized sources. Get your custom essay on
“ American Revolution, Market Driven or Not ”
Get custom paper
NEW! smart matching with writer

The Native American Indians were the only other adversaries left for the colonists, though they felt they didn’t need British support for further inland conquest.

The British government did however try to protect the Natives by preventing the colonist of trekking further inland with the Royal Proclamation of 1763 and so their desire to break from British control had increased.

The American colonist started to see themselves evermore as collection of colonies with the potential to become an independent state. Thus from the British point of view they saw no problem in taxing the colonies who to them where just part of the empire and thus justified the costs for protecting them against the French.

Anderson F. (2001) & Madaras L, SoRelle J (2011) T.H. Breen argues that the American Revolution was largely a product of market-driven consumer forces, Gordon S. Wood agrees with T.H. Breen to a certain degree over the major cause but says that the ideological and desire for self-governing are not to be ignored. So by 1760 smuggling had become a major American enterprise, given that it was expensive to maintain revenue cutters and other patrol vessels along a thinly populated American coast filled with many bays, and rivers in which vessels could hide and move unseen, the British had found it very expensive trying to enforce navigational laws. Madaras L, SoRelle J (2011) & Wood S. G. (2003)

In 1761 the British began to reinforce writs of assistance, laws that granted customs officials the authority to conduct random searches of property to seek out goods on which required duties had not been paid, not only in public establishments but in private homes. The next step was the Sugar Act of 1764, and it quickly became apparent that the purpose of the act was to extract revenue from America. The Molasses Act of 1733 had placed a tax of six pence per gallon on sugar and molasses imported into the colonies. In 1764 the British lowered the tax to three pence but now eventually decided to enforce it.

In addition, taxes were to be placed on other items such as wines, coffee, and textile products, and other restrictions were applied, this upset the colonists. Madaras L, SoRelle J (2011) & Wood S. G. (2003) The Currency Act of 1764 prohibited paper currency in Virginia, which reduced the circulation of paper money in America, further burdening the colonies, which were always short of coin currency, the Act led to a rise of poverty in colonies. The British enforcement of the Sugar and Molasses Act quickly cut into the economic welfare of the colonies by causing a slump in the production of rum.

The colonists were becoming increasingly agitated of what they perceived as British attempts to milk more profits from the colonies. Meetings were called to protest against the law, and the idea of taxation without representation began to take shape. Wood S. G. (2003) & Madaras L, SoRelle J (2011) Although the American colonists were becoming very unhappy with the restrictions on trade and various import, export duties and taxes, they were not yet necessarily philosophically opposed to the right of the British to control trade, because it made it easy for them to avoid the attendant duties.

The Stamp Act of 1765, however, caused new discontent. The Act required that revenue stamps be placed on all newspapers, pamphlets, licenses, leases, and other legal documents, and even on such innocuous items as playing cards. The protests soon stopped being only verbal and men selected to be collectors of the new taxes were openly threatened with violence, and many resigned their posts before they had collected anything. Associations were formed to encourage boycotts of British goods. Colonial legislatures nullified the act, and shipments of stamps were to be destroyed. Anderson F. (2001) & Madaras L, SoRelle J (2011)

In Conclusion, once the American colonists had grown accustomed to having a well-off lifestyle created a mindset for them in which they would not brook any threat to their prosperity. When the British Government and Banks in their efforts to acquire an income from the Colonies ever increasingly after the Seven Years War. Though if the Americans lost the war they would have lost all that they fought for, so the ideographs of freedom and liberty also played a great part in the motivation of the American Revolution.

American Revolution, Market Driven or Not. (2017, Feb 27). Retrieved from https://studymoose.com/american-revolution-market-driven-or-not-essay 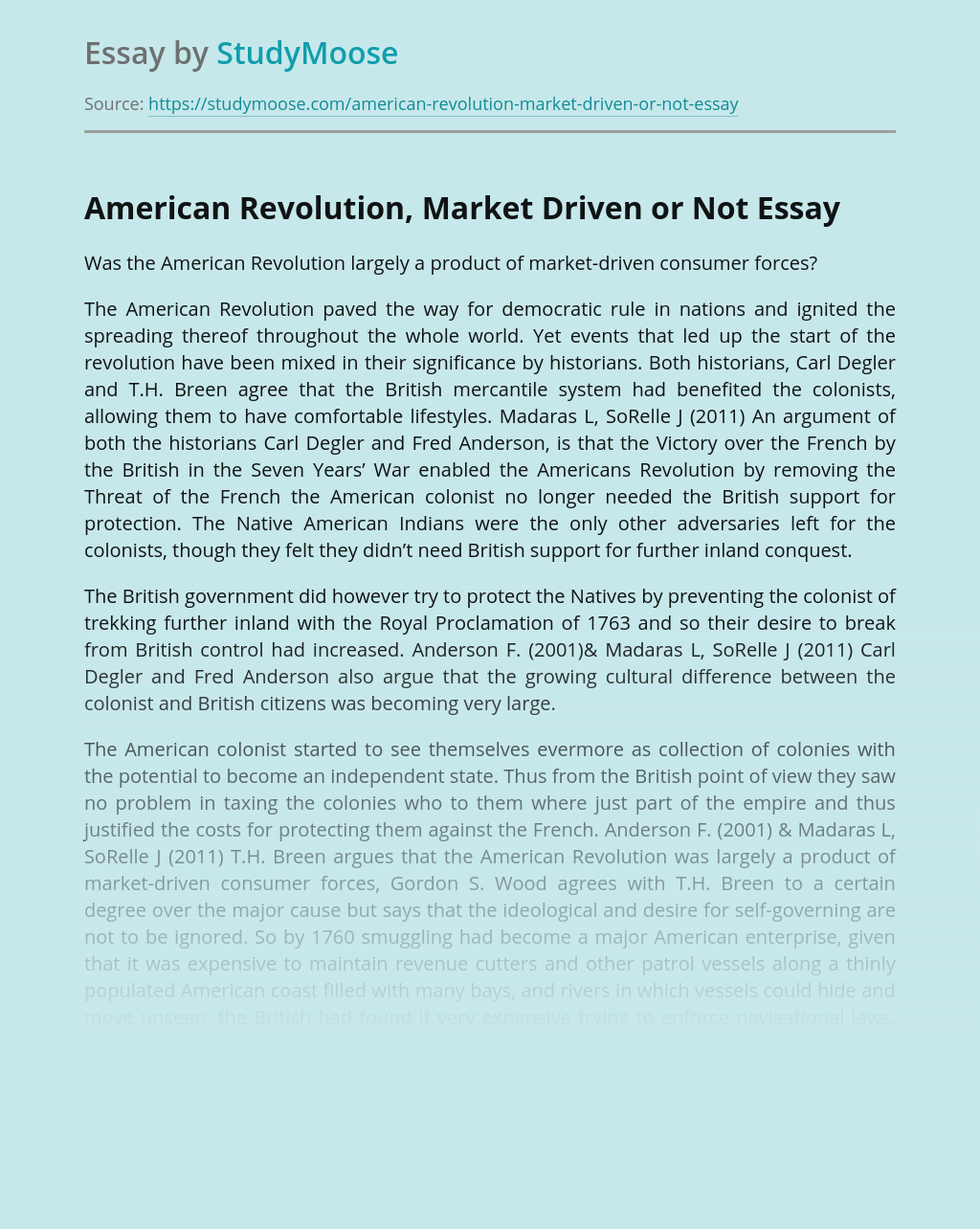