AMERICAN REGIME
One can say that the major contribution brought to the Philippine literature under the American Regime (1898-1941) is the production of the Philippine Literature in English, which is divided into three different time frames : The Period of Re-Orientation (1898-1910); Imitation (1910-1925); and Self-Discovery (1925). The Philippine Literature in English saw it’s dawn with the introduction of free public instruction and the use of English as a Lingua Franca in all levels of education in public schools. HISTORICAL BACKGROUND

The Filipino revolutionist won against the Spaniards who colonized Philippines for more than 300 years.

Turn in your highest-quality paper
Get a qualified writer to help you with
“ American regime ”
Get high-quality paper
NEW! AI matching with writer

The Philippine flag was hoisted on June 12,1898 as a symbol of independence. Gen. Emilio Aguinaldo was elected the first President of the Philippine Republic, which was short-lived. Americans colonized the Philippines and in 1901, Gen. Emilio Aguinaldo surrendered to the Americans. Filipino writers went into all forms of literature. Their writings showed their love for the country and their longing for independence. Their resentment expressed in literature was first felt in the following newspapers: 1.

Established by Sergio Osmena in 1900.
The American censors banned this twice and threatened Osmena with banishment because of nationalistic writings.

2. EL GRITO DEL PUEBLO ( THE CALL OF THE NATION )
Established by Pascual Pobleto in 1900.

SALIENT FEATURES OF PHILIPPINE LITERATURE UNDER AMERICAN REGIME Spanish , Tagalog and Vernaculars were the languages used in writing during the first years in American period, but Spanish and tagalong were the predominated language. In 1910, a new group started to write in English.

Hence, Spanish, Tagalog, the Vernaculars and finally English were the mediums used in
literature during these times. Spanish writers wrote about nationalism.

Tagalog writers wrote about their lamentations on the condition of the country and their attempts to arouse love for one’s native tongue. English writers imitated the themes and methods of the Americans. FAMOUS AUTHORS

1. SPANISH WRITERS
a. Cecilio Apostol
Considered as the greatest Filipino epic poet writing in Spanish. He wrote poems dedicated to Rizal and one entitled A RIZAL (To Rizal) b. Fernando Ma. Guerero
Known as the “Prince of Filipino Lyric Poets” in Spanish. Wrote a book of poems entitled CRISALIDAS.
c. Jesus Balmori
Well known for his pen name BATIKULING
Wrote Los Pajaros de Fuego (Birds of Fire)
d. Manuel Bernabe
A lyric poet whose fierceness of nationalistic spirit was unchanged in any topic he wrote about. In 1913, he received an award for his poems THE HYMN TO THE SACRED HEART OF JESUS, EL ZAPOTE and ESPANA EN FILIPINAS. e. Adelina Gurrea

First woman poet in in the Philippines who was good in Spanish. Obtained Zobel prize in her song EL NIDO ( THE NEST).

2. FILIPINO WRITERS
a. Lope K. Santos
A novelist, a poet and grammarian.
The father of national language grammar
BANAAG AT SIKAT is his masterpiece
b. Jose Corazon de Jesus
Popularly known as Huseng Batute
Also called as the poet of love.
ANG ISANG PUNONGKAHOY is believed to be his masterpiece.
c. Amado V. Hernandez
Called as makata ng mga manggagawa ( poet of the laborers)
His poems portrays intense love for the poor worker and laborer. His contributions to literature are ISANG DIPANG LANGIT ( A STRETCH OF HEAVEN); BAYANG MALAYA (FREE NATION); MUNTING LUPA ( A SMALL PLOT); and ANG PANDAY (THE BLACKSMITH), his masterpiece. d. Valeriano Hernandez Pena

Know as Tandang Anong and his pen name was Kuntil butil.
NENA AT NENENG , his masterpiece.
e. Severino Reyes
The father of tagalong drama
Author of WALANG SUGAT
f. Pedro Bukaneg
Father of Ilocano literature
From his name derived the word bukanegan , which means balagtasan (a poetic contest) in Ilocano. 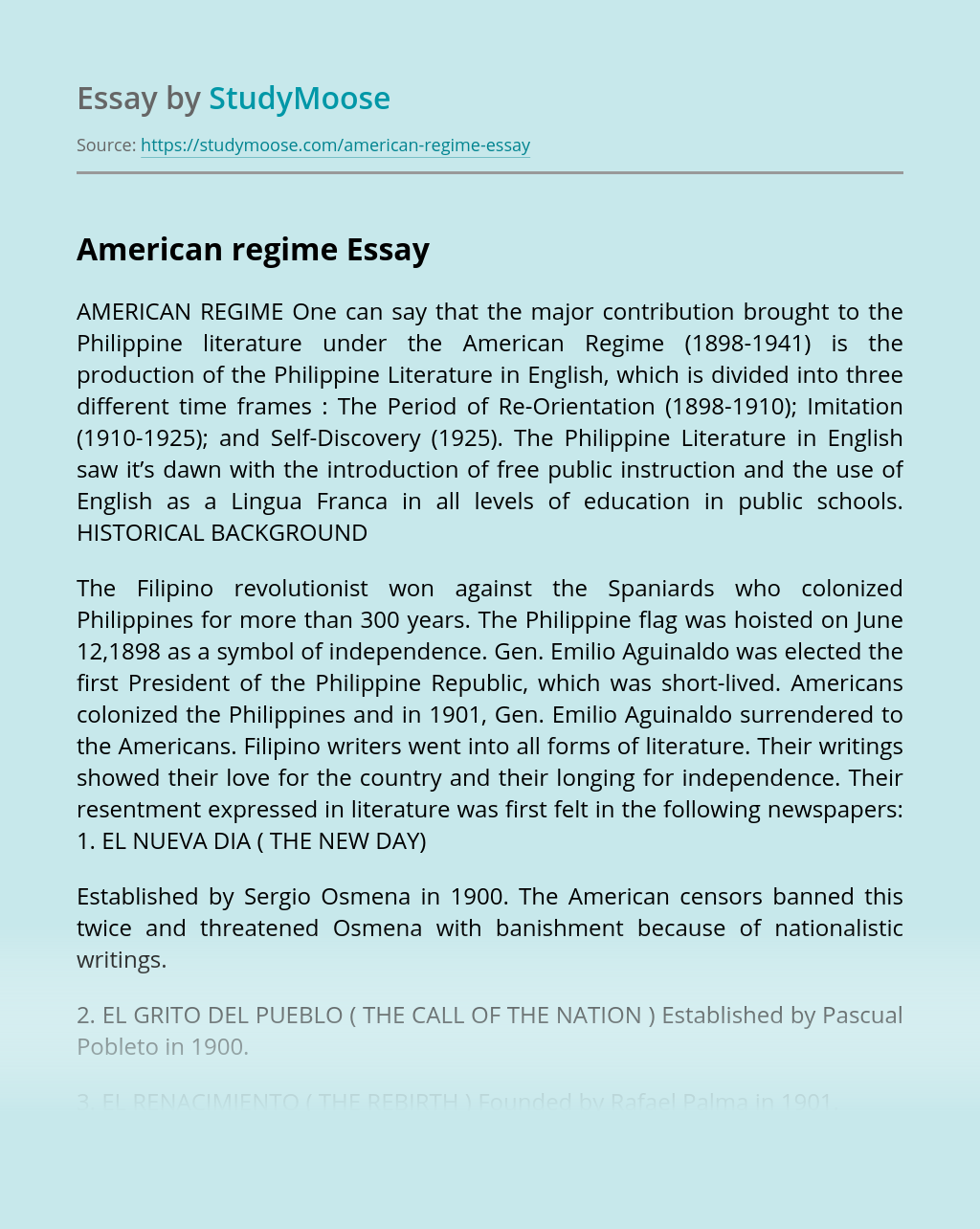 Turn in your highest-quality paper
Get a qualified writer to help you with
“ American regime ”
Get high-quality paper
Helping students since 2015
Stay Safe, Stay Original