The 1950s meant the emergence of the teenager; it also brought peace and prosperity to many.

Don't use plagiarized sources. Get your custom essay on
“ American Popular Culture In Australia ”
Get custom paper
NEW! smart matching with writer

And during the fifties there were far more American films released in Australia, and they became more popular than many Australian films. Films were of great influence to the youth of the 1960s, films such as The Wild One and Rebel Without A Cause showed a new type of teenager, one who was not only different, but was rebellious. This new view of what a teenager could be gave birth to the idea of “bodgies” and “widgies” which is what many teenagers became known as during the fifties.

These “bodgies” and “widgies” were greatly influenced by the culture of rock-‘n’-roll music. The term “Rock-‘n’-Roll” was invented in the mid 1950s for a new and exciting music. This type of music was to become popular beyond belief, it not only began to dominate the tastes of America’s youth, and it soon became the popular music of choice for youths throughout Australia, too. Popular artists such as Elvis Presley and Bill Haley and the comets were among the top entertainers influencing Australia’s impressionistic youth.

The lifestyle trends of Australia were also, to a great extent, impacted by the trends of America. During the 1950s the lifestyle of a typical American was very different to that of a person during the forties. The lifestyle was more laidback, mainly due to the end of the war; people believed that they were entering a new age, where anything was possible. Australia followed Americas lead, and many of their lifestyles changed with the Americans. By the late 1950s, television was the most important form of mass entertainment and culture; it had become an important part of many people’s lives. Through television Australia saw the American life, and then modelled (to a certain extent), parts of their lives on what they saw of the American lifestyle.

During the 1960s, Australian society remained hugely affected by American popular culture. And although the culture of the youth was no where near as strong or powerful as it was in America, Australia was, to a great extent influenced by what was happening in America at the time. What happened in America was almost always mirrored by Australian teens (although to a smaller extent). Fashion-wise, the sixties saw the flowering of the Hippie Movement. All of a sudden the tight black pants, bright socks and hair grease of the fifties were gone, and in came the mini-skirt, velvet pants and paisley shirts. As American teenagers began to grow their hair longer and longer, it seemed Australian teenagers opted to follow this new trend.

Films took on a new genre; the films of the sixties began to portray the story much more realistically. Blockbusters such as Easy Rider were on the scene. In the film industry in the sixties Britain tended to lead, but America adjusted, and Australian society continued to follow.

Of course, there is one aspect of the sixties, which will remain in everybody’s mind forever: Psychedelia. A style like no other. It was a period like no other, a world of hallucinogenic drugs, swirling shaped and luminous colours. It was LSD, which provided the mental and visual stimulus behind psychedelia. Psychedelic patterns and colours quickly found their way in to mass-produced fabrics and clothes.

Psychedelia also influenced the music industry significantly, with great bands such as the Beatles producing songs such as Lucy in the Sky With Diamonds with thinly disguised references to drugs. The Beatles were hugely popular in Australia as well, and it was the Beatles tour of Australia in 1964, which proved just how much this American pop group influenced these Australian citizens. During the tour parents and police were ignored, and Australian teenagers were lapping it up, the overseas excitement was finally there for then to fully be a part of.

But the psychedelic styles of the sixties were so strong and unsympathetic to other styles that it was inevitable that Psychedelia departed as quickly as it arrived.

The fifties and sixties were completely different in so many ways; the times had changed a lot in the transition of decades. The types of music, for one, were in great contrast. By the sixties the rock-‘n’-roll and pelvic thrusting of the fifties had transformed into the pop, rock and folk music of the likes of the Beatles, the Rolling Stones and Bob Dylan. Teenagers changed a lot over the two decades a lot, too. The tight pant, leather jacket bodgies, with their greased hair, and the widgies, with their rope petticoats and flared dresses, were replaced by the teenagers of the Psychedelic era. These teenagers preferred the swirled shapes and bright colours, with their newly found mini-skirts, and for the guys it was paisley shirts.

Although the two decades were different in themselves, there is still a parallel running between the two. Both were times of change, with popular culture culminated for the newly recognised youth, each decade had their own brand of pop music, and their own brand of teenagers.

However, the teenagers of the sixties, despite the overuse of drugs, remained a lot more politically minded, by holding many war protests, for example. The fifties played home to a time where the brand teenager was first recognised, and the sixties were a carry on from this, an expansion where teenagers gained more and more out of life and the world.

We have seen how Australian society was influenced by American popular culture in the fifties, now the question is why. There were many factors that contributed to this sudden change in ideals. One of the main factors involved was the end of WWII, WWII had brought America to Australia, it became one of Australia’s major trading partners, and our major investor. Economically and culturally we identified with America. Also, following the war communications around the world had been significantly improved, thus giving Australia greater opportunities to be connected with America, and therefore see and “copy” (in a way), just what they were doing.

Another factor of significant importance is the impact that television had on society overall. With the intervention of television Australian’s had a clear and self-evident view of America, as many of the programs shown on Australian television were in fact American. With more and more people seeing these programs the excitement grew and the popular culture of American society grew in Australia. Through the passage of time Australian culture absorbs these aspects of American culture and they become linked with our identity.

The reasons for why Australia was impacted so greatly in the sixties can be traced back through the fifties. As the fifties went on America seemed to continue to dominate more and more. And by the time it reached the sixties there was an abundance of America programming on Australian television and radio, which influenced many young, impressionably minds. Another main factor was that Australia’s economy had substantially increased by the sixties, due significantly to such Government programs as the Assisted Immigration Scheme. With more money to spend, many Australian youths put their money to items, which then enforced pop culture, such as CDs and popular fashions of the time.

But it all came down to the fact that America sells its culture and products to the world and teenagers in the western world are vulnerable to advertising. And perhaps the most important factor in all this was the Vietnam War. Many soldiers spent their R&R time in Australia. This impacted greatly upon the youth of Australia because many servicemen brought with them their own music and style which influenced the society that they brought it to.

Of course, Australia didn’t just sit back and watch the excitement unfold, Australian society had their own responses to the latest trends. The culture, of course, in Australia was no where near as strong as that in America at the time. But still, in many ways Australia decided to copy the popular trends of the time, but in many other ways they had their own. Young Australians formed their own gangs, made up of “bodgies” who wore tight black pants and greased their hair and their female counterparts “widgies” who wore rope petticoats and flared dresses, throughout the fifties these groups became increasingly violent. These groups were in response to such American hits as Rebel Without A Cause and The Wild One. 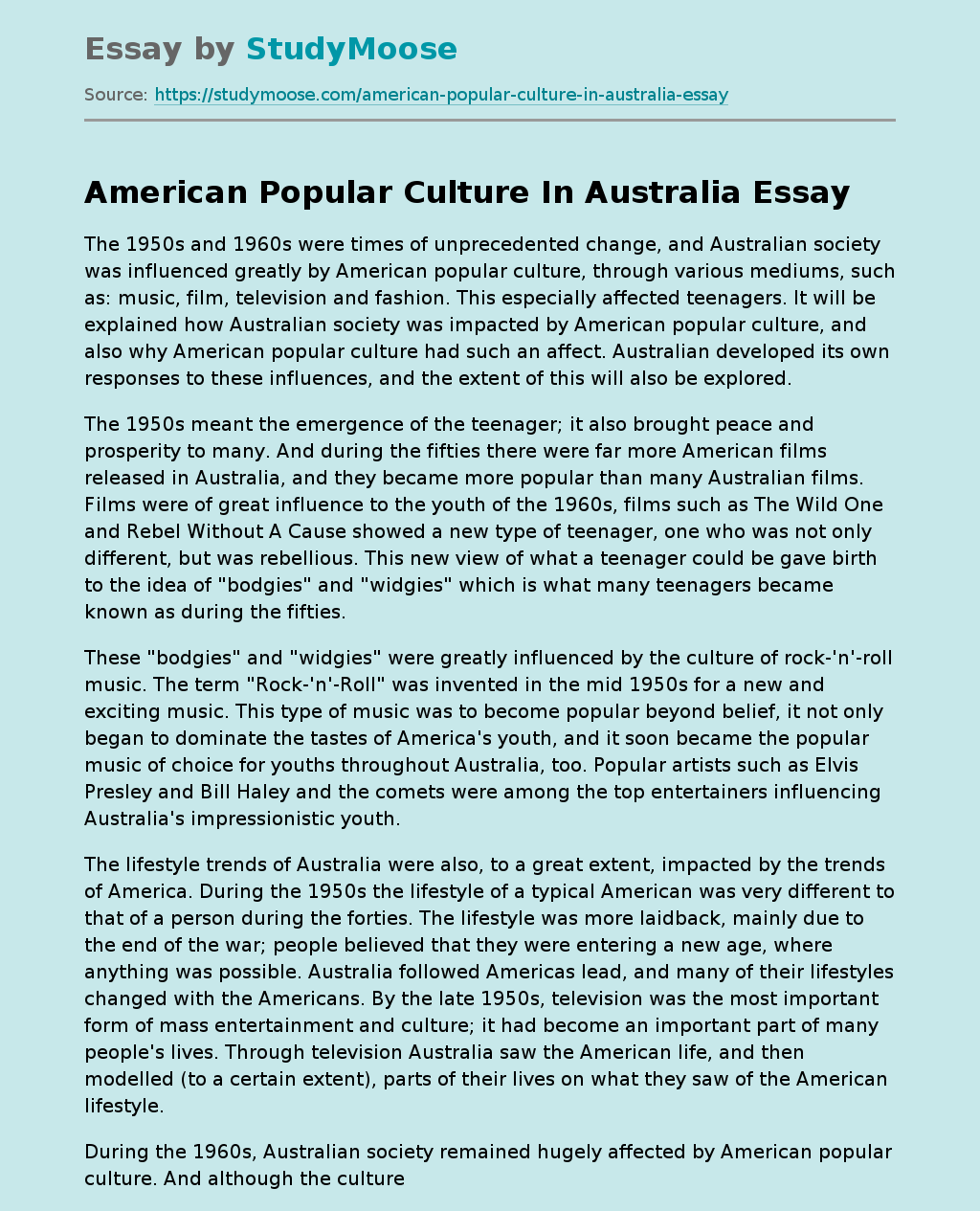