Between the Civil War and the end of World War I, industrialization played an ever increasing role in the economic, social, and political development of the United States. Industrialization had a huge impact on American in all of these ways, such as many Americans moving from the rural areas to urban areas, living the big city lifestyle with Industrialization on the rise. Social Darwinism also known as Survival of the fittest took an impact during this time period, the nation was facing great changes causing many people to begin new lifestyles.

Turn in your highest-quality paper
Get a qualified writer to help you with
“ American Industrialization from Civil War to WWI ”
Get high-quality paper
NEW! AI matching with writer

People began working in factories and big buildings instead of on farms. Labor unions also were formed to protect the workers from unfair wages, long days, unsafe conditions, etc. Although there were positive effects during this time there were also negative effects on the social, political, and economic, aspects of the United States.

Andrew Carnegie believed in the moral duty of the rich giving back to the community so he spent much of his wealth paying for libraries, universities, trust funds, and Carnegie Hall to be built also creating more jobs (Shown in Document 8). Another Economic effect on the United States was the American entry into WWI.

The army for the United States wasn’t as prepared for the modern campaigning military action like other European nations.

America’s productive strength made up for that by boosting billions of dollars and our industrial potential caused its share of world manufacturing output to be 2 and a half times that of Germanys. Our entry transformed the balances and compensated for the collapse of Russia at the time (Shown in Document 9) this being a positive of American industrialization. Next I will discuss the social impact industrialization on the United States. Due to such the high demand for employees and work at the time working conditions weren’t always so great. Clara Lemlich a labor union strike leader sparked the 1909 walkout of shirtwaist makers. The strike occurred because workers were making about $6 a week on a good week, are constantly at their machines from 7am to 8pm daily with only one 30 minute lunch break. This strike gathered the public’s attention fueling the creation of labor unions and labor laws (Shown in document 6A).

Due to poor working conditions, unsafe and unhealthy work environments, and children working started the creation of labor laws. One of the first of these was the Laws of the state of Illinois and their passage of the 38th general assembly. Some of these laws were if upon inspection such workshops shall be found unhealthy/infectious orders will be given and actions taken as the public health shall require. Another law passed was children under 14 are prohibited from being employed; also no female shall be employed in any factory or workshop for more than 8 hours a day or 48 hours a week (Shown in document 4). Industrialization from the Civil War to World War I affected the social aspect of the U.S. by drastic changes, changes the American people were not used to this is where Social Darwinism comes into play. Next I will cover the political changes industrialization caused during this time period. The “Captains” of Industrialization during this time were arrogant, such as Mr. Rockefeller they believed they were above the Government and politicians. This created Bad Trusts that reduced competition and drove up prices.

Theodore Roosevelt the president at the time became a trust buster, by creating the Sherman’s Antitrust Act in 1890 this declaring all combinations of in restraint trade now illegal (Shown in document 7B). Another example of the political impact was the Boss tweed and Tammany Hall scandal. Tammany hall was a political organization formed in 1786, and played a major role in controlling New York City and New York State politics. Boss Tweed was an American politician and the “boss” of Tammany Hall. Boss tweeds control over the political patronage in NYC through Tammany Hall as well as the tension between political leaders an industrialization “kings” lead to Boss tweed having and unfair add vantage over other candidates, ensuring loyalty of voters through job offerings. The outcome of this later resulted in Tweed’s conviction for stealing an estimated $25-$45 million dollars from NYC tax payers due to political corruption.

In conclusion the era between the Civil War and World War I’s industrialization played an ever increasing role in the economic, social, and political aspect of the United States in both negative and positive aspects. Economic changes ranged from where the people mainly lived and types of jobs to how they changed. As well as labor unions and labor laws changing working conditions, to the American entry into WWI. Social changes ranged from the era of reform, the women’s rights movement and the 19th amendment and their right to vote, as well as women causing rallies and strikes. Lastly the political changes ranged from Theodore’s Roosevelt’s “Trust Busting” to political greed and corruption. 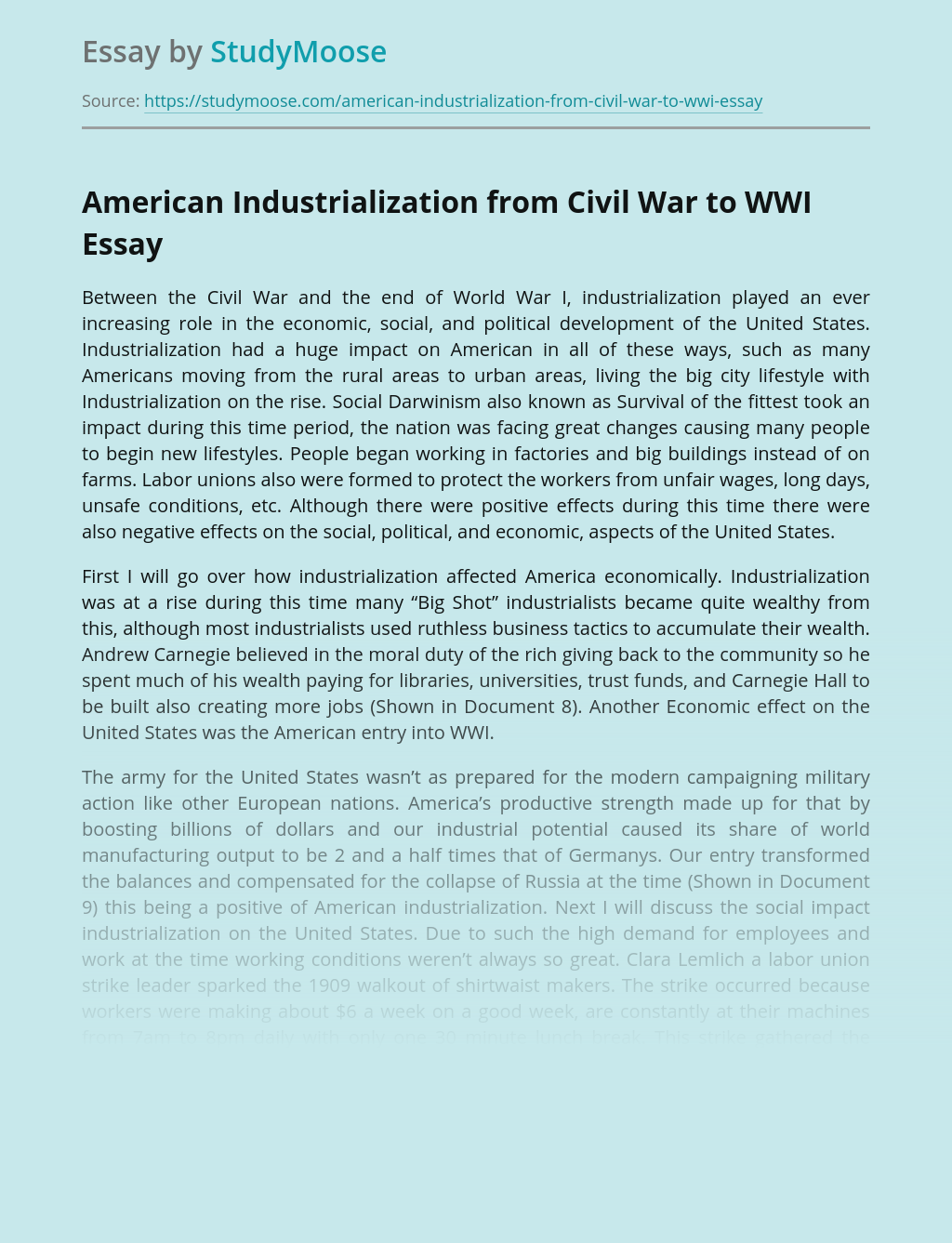 Turn in your highest-quality paper
Get a qualified writer to help you with
“ American Industrialization from Civil War to WWI ”
Get high-quality paper
Helping students since 2015
Stay Safe, Stay Original