American industrial workers between 1865 and 1900

Between 1865 and 1900, American industry workers experienced both good and hard times. Labor Unions were forming, and these new creations often produced better lives for the workers. However, waves of immigrants were also coming into America, which resulted in the threat of job stability. Labor Unions and Immigration both had momentous effects upon the industry worker, for better or for worse.

After the Civil War, which killed much of the working population, people began to appreciate their skills more and more due to the lack of human resources.

Don't use plagiarized sources. Get your custom essay on
“ American industrial workers between 1865 and 1900 ”
Get custom paper
NEW! smart matching with writer

Labor Unions began forming, demanding better pay, hours, and conditions. Labor Unions did receive some of what they bargained for, but their greatest gain was the augmented participation people began to take in expressing their convictions.

They also wanted the trade agreements. These Labor Unions negotiated with employers and held strikes, which gradually led employers to grant better lifestyles to the workers.

The success in these Labor Unions lay not only in their arguments themselves, but in the myriad of strikes that occurred. Employers were often hurt financially by so many workers. Many employers simply realized that it would be more economical to make agreements with their workers than to engage in warfare. By 1900, the public began to acquiesce the right of workers to organize, bargain collectively, and to strike. Labor Day was made a legal holiday by act of Congress in 1894. However, there were still many disagreements between the employers and Unions and constant battles were going on. Although Labor Unions were not immediately successful during this period, they were a significant stepping stone in that they encouraged the working class to become more vocal in their working circumstances. Labor Unions in this epoch however did achieve some changes, such as better wages, less hours, and a national holiday. These gains were small compared to the precedent the Unions set for America.

Another aspect that had an important effect on the Industrial worker was immigration. After the Civil War, and even during the war itself, the US was increasingly becoming more and more populated. By the 1880s, Immigrants had come mainly from Western Europe. In the 1850s, the Chinese began to arrive in America. In the 1880s, the New Immigrants, Italians, Croats, Slovaks, Greeks, and Poles, began to immigrate into America. Workers met these new immigrants with hostility and scorn.

The Chinese settled mainly in the West, so they were not a major concern for Industry workers at that time (Most workers worked in the factors on the East, whereas the Chinese were on the West). However, when the New Immigrants came to the country, the Industry workers were furious. Especially with the formation of Labor Unions, these workers claimed that the New Immigrants were willing to take jobs with much less pay, therefore taking many of the current jobs occupied by the middle and lower classes.

Nativism was revived again as these New Immigrants came to America. Many people were worried that the US was losing its English influences and was becoming a mixture of inferior southern Europeans. Hence they upbraided these immigrants for the degradation of the urban government. Unions assailed them for their willingness to work for such low wage. Antiforeign organizations were revived, such as the American Protective Association which urged voting against Roman Catholic candidates for office. Workers argued that if American industry could be protected from foreign industry (tariffs…etc), then American workers ought to be protected from foreign workers (Immigrants…etc.). Congress did pass immigration laws in 1882 due to the increased criticism to the government. It also passed a law in 1885 which prohibited the importation of foreign workers under contract.

Thus, the new Immigrants took many jobs away from the old “native” Americans. Because these new immigrants were willing to take any wage, employers were able to offer jobs currently held by workers to the immigrants for lower wages. Thus the new immigrants were often mistreated and struggled to integrate into American society. However, one extremely important fact to remember is that the torrent of immigrants DID help the wealthy class. The employers did enjoy the cheap labor. Immigrants therefore, also helped create tension between the workers and their employees.

Between 1865 and 1890, both Labor Unions and Immigration had distinct effects upon the American worker. Labor Unions aided the worker because they often helped fight for better conditions and wages. Immigration was bad for the workers, because it meant instability to their jobs, and many immigrants were treated with derision. Both situations increased the tension between workers and their employees. In this period, American workers experienced both good and hard times, due to the rapid changes in American society. 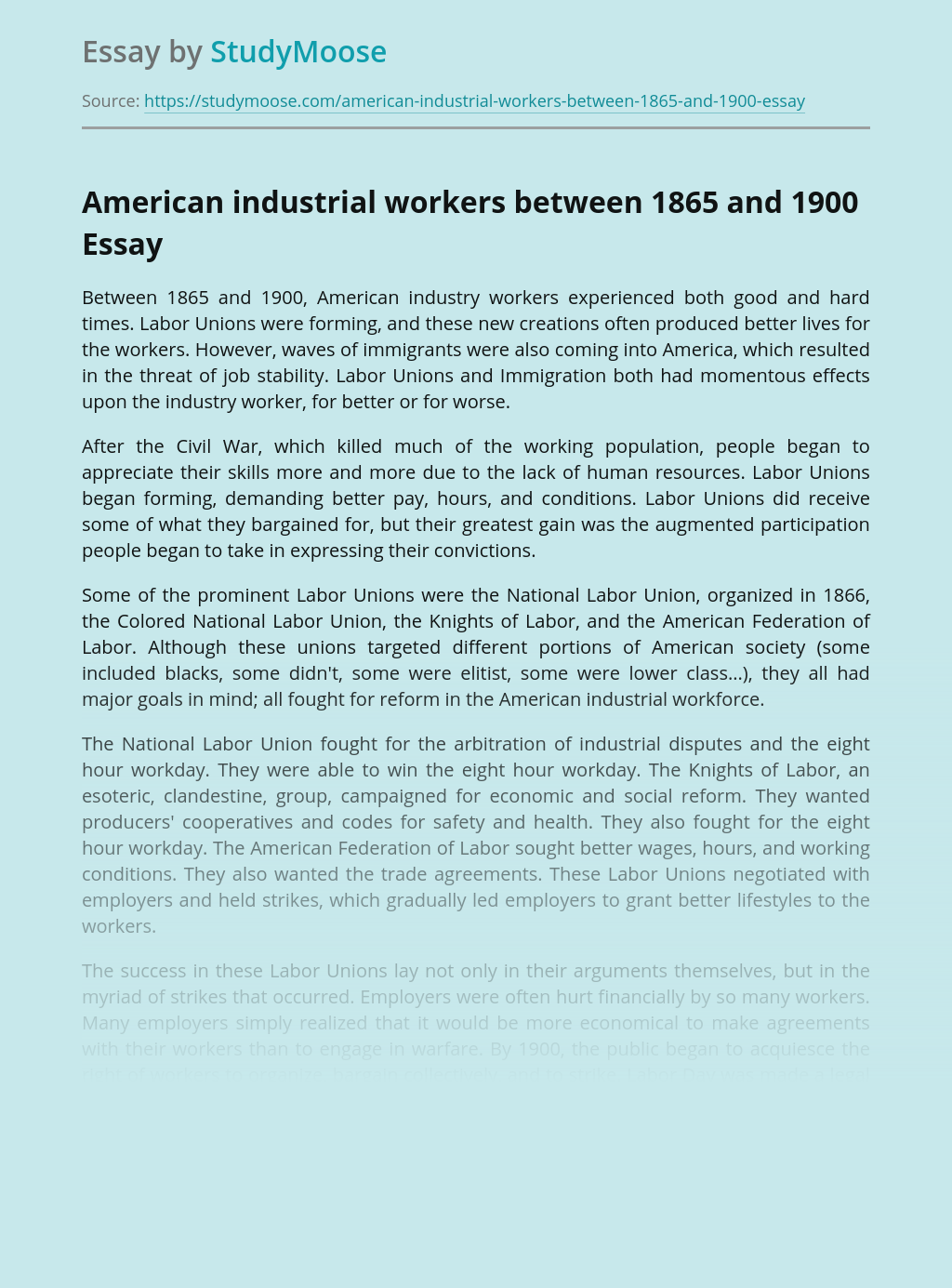