American expansion in the 19th century

In the years between 1830 and 1860, the United States grew economically, socially, and most noticeably, geographically. In this time period, Texas, Oregon, California, New Mexico, and Arizona were gained, completing the continental United States. Many Americans in the 19th century believed this acquisition of territory was a manifest destiny, or event accepted as inevitable. They thought it was the destiny of the U.S. to control all land from the east coast to the west coast. However, I believe that this land was taken as an act of aggressive imperialism on the part of the United States.

Don't use plagiarized sources. Get your custom essay on
“ American expansion in the 19th century ”
Get custom paper
NEW! smart matching with writer

Imperialism is the practice of extending the power and dominion of a nation by direct territorial acquisitions of other areas, and clearly America took much of this land by force rather than negotiation with other nations. The motives of the United States was not that of expansion, but in hopes of gaining new resources, land for agriculture, and natural resources. Also, the gain of this territory was far from inevitable.

During the 19th century, the United States engaged in conflicts with both Great Britain and Mexico with victories yielding land. Although the boundary between Maine and Canada was determined by the Webster-Ashburn Treaty, the “battle of the maps” between Americans and British spurred negotiations. The southern border of Texas was set at the Rio Grande River following a three year war with Mexico, also resulting in the acquisition of the Mexican cession (California and New Mexico). The terms of the Treaty of Guadalupe-Hidalgo called for the United States to pay Mexico $15 million for this land, but this payment was more of a compensation for the war rather than purchase of land.

The United States used force to gain much of the western territory, just as imperialist nations did overseas. I see no difference between the United States taking land from Mexico and France taking control of Northern Africa; both cases are imperialism at work.

The east coast of the United States was well settled and developed by the mid 1800s, but was by no means overcrowded. Earlier in the history of America, the government forced Native Americans off their lands to show its power and authority over lesser people. The theory of manifest destiny seems to be just another show of power. The American people were not desperate for this land, it was more of a novelty. By gaining this land, new natural resources could be gained, as proven by the gold rush in California in 1848. The people inhabiting these regions were often not American, but British or Mexican in the case or the Oregon Territory or California, respectively. The completion of the continental United States was not motivated by the need to expand, but for a desire of power.

The term manifest destiny refers to an inevitable event, but the expansion of America was actually avoidable. At one time, politicians such as President James K. Polk were set on a division between the Oregon Territory and Canada at the line 54’40”. In fact, the term “54’40” or fight” was a popular campaign slogan for the election of 1844. When all was said and done, the boundary between the United States and Canada was drawn and the 49th parallel, much shorter than initially desired. Cuba was considered for purchase from Spain in the 1850s, but eventually this was defeated by antislavery members of congress, as the warm climate and plantations already in existence there would benefit the south alone. Mexican land was also threatened following the war, as Americans captured Mexico City, and many Democrats hoped to gain all land under Mexico’s jurisdiction. In each of these cases, the opportunity existed to further expand the United States, but more aggressive measures were not taken. America did not have to have any of this additional land.

I feel that the idea of manifest destiny is simply a way to rationalize the United States practice of imperialism in North America. None of the land gained in the 19th century was given to the U.S., it was taken using force and often violence. Financial compensation is irrelevant considering wars took place to complete the southwest. The government was motivated by the power that could be attained by expanding the size of the nation, motivating many of the decisions regarding territory in this time period. Also, if the belief in manifest destiny were held true, the United States would currently encompass much of Canada, Cuba, and Latin America., which is obviously not the case. The actions of our nation in the 19th century were not that of manifest destiny, but in fact aggressive imperialism.

American expansion in the 19th century. (2016, Jun 20). Retrieved from http://studymoose.com/american-expansion-in-the-19th-century-essay 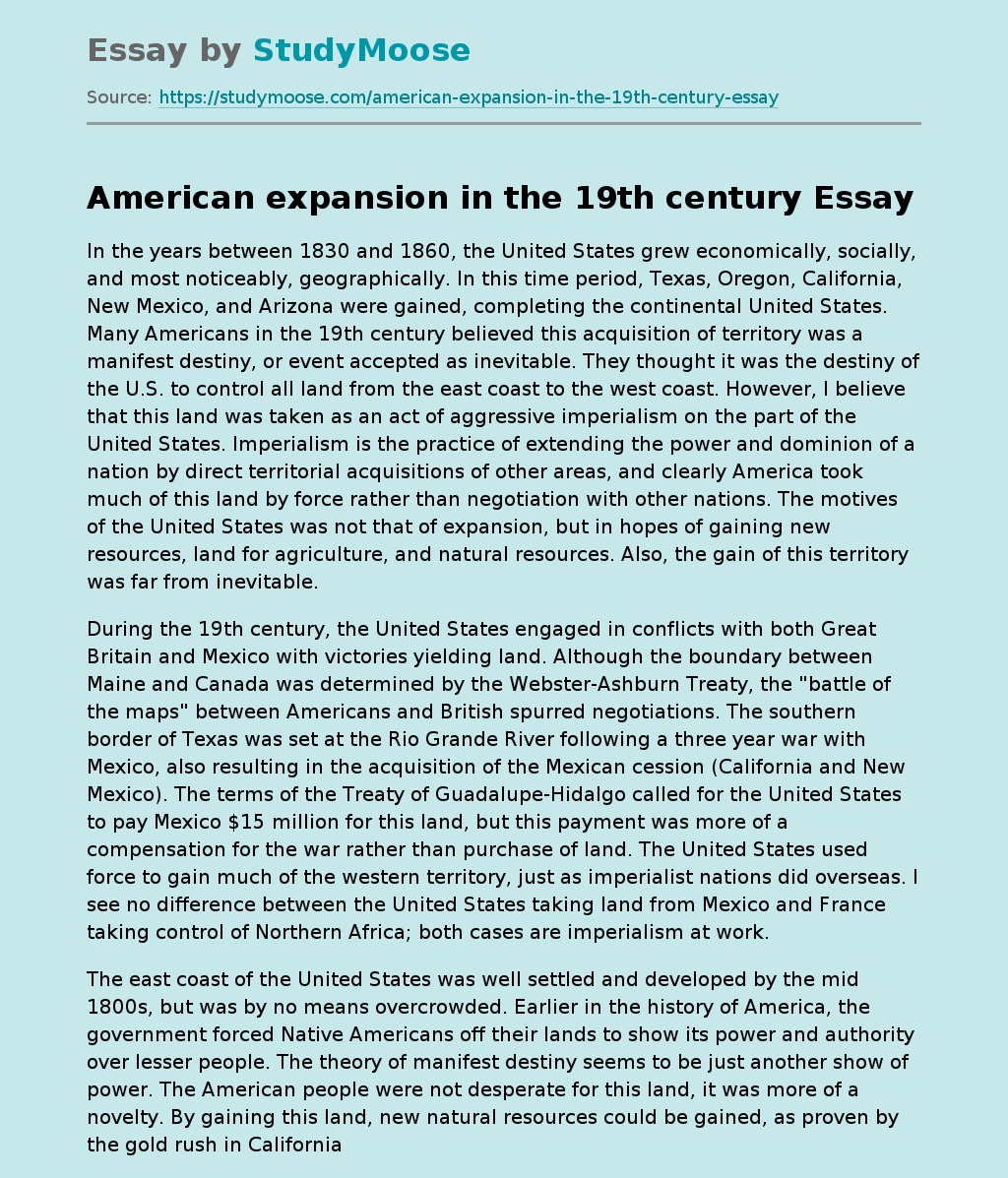