In the passage from “America Needs Its Nerds”, author Leonid Fridman dissect his argument by comparing and contrasting America’s on-going social beliefs and perceptions of the geek and the actual positive role taken on by the nerd and why the role that they play is so vital to our society. Friedman begins with, bringing to our attention, the type of terms our society uses to describe the “intellectually curious and academically serious.

These types of derogatory terms aid in displaying Fridmans view point on the subject as he believes that the `use of these words to describe nerd and geeks are in fact an issue.

Don't use plagiarized sources. Get your custom essay on
“ Comparing and contrasting America’s social beliefs and perceptions ”
Get custom paper
NEW! smart matching with writer

Fridman uses diction that disgraces our society who casts out nerds because of their “intelligence and refusal to conform to societies anti-intellectual values. ” Friedman applies the term ‘ostracized’ as a later follow up to the previous description of how it is common for the child who’d rather study or read books is looked down upon versus athletes who are falsely praised.

In his essay, Friedman gives us insight on the negative connotation of the nerd and the failure to criticize the ones deserving of it. After this accumulation reaches a climax, Fridman establishes a turning point in his argument, utilizing one short and very straightforward sentence to display how exhausted he has become with the stereotype that the studious person is automatically given. Here, he begins to shift his tone from bitter and disgusted to motivational and inspiring.

He even weaves patriotism into his argument, seemingly stating that the nerd population has become a national disaster zone in need of immediate attention from each individual citizen.

Immediately following however, he turns and attacks our nation by giving a comparison between the US and Asia, claiming that they, our “rivals,” are doing a much better job of appreciating their own intelligence. As Fridman closes, he begins to place his argument into his reader’s hands by asking multiple and repetitive rhetorical questions.

By over-generalizing America’s “typical” parent, he again motivates his reader to set himself apart from the cruel and stereotypical (most likely athletic) crowd and begin appreciating the “nerd” for himself. In this passage, Fridman makes a noteworthy effort to revolutionize an obviously shallow American standard. With a large dose of his own biased bitterness, and possibly a dash of his own “nerdy” revenge, he creates the solid argument that “America needs its nerds. “ 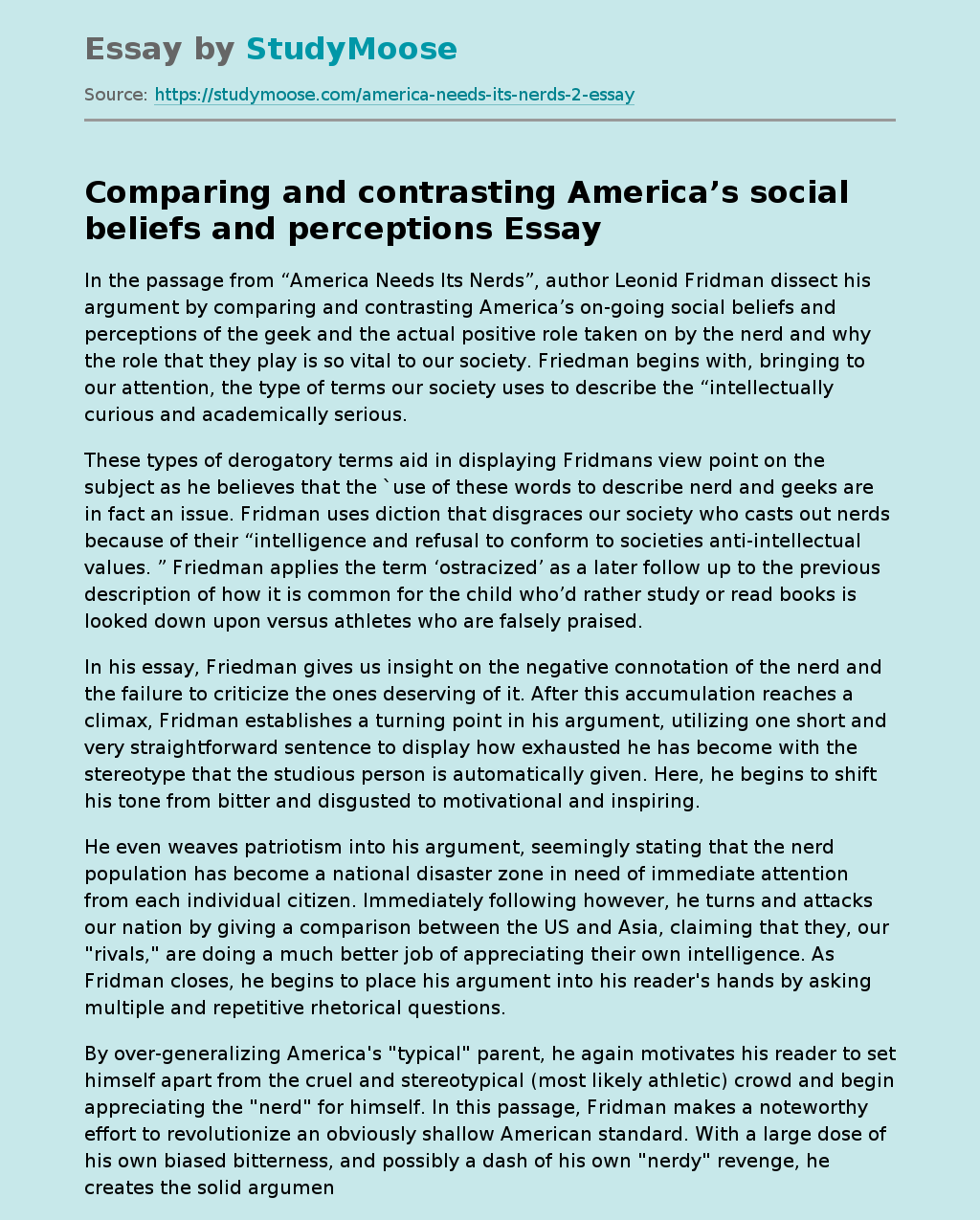